Russia has ordered the closure of the British Council, an organisation which promotes cultural ties between the nations in St Petersburg. The announcement comes in retaliation to Prime Minister Theresa May’s decision on Wednesday to expel 23 Russian diplomats from Britain. Russia confirmed Friday it would expel British diplomats and halt high-level meetings in return.

The tit for tat diplomacy was prompted by the poisoning of UK residents Sergei Skripal and his daughter Yulia. Skripal was a critic of Vladimir Putin and a confirmed double agent, released in a spy swap in 2010. They remain critically ill in hospital after the two were found unconscious on a bench in Salisbury, Wiltshire on 4 March. 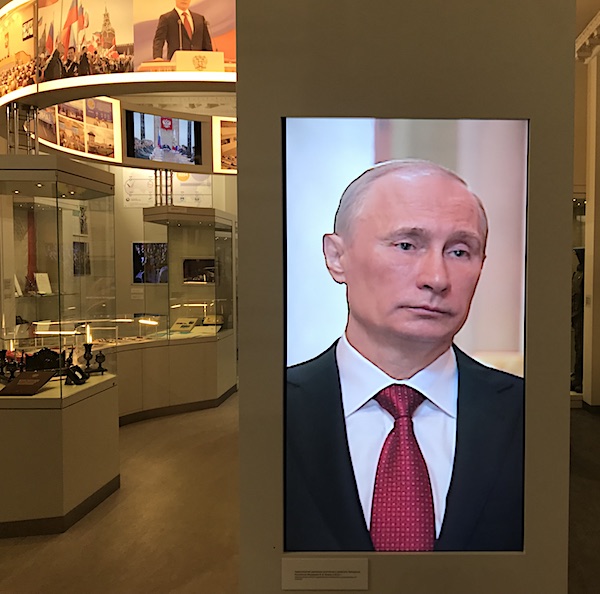 Putin Display at The Museum of the Revolution Moscow © Artlyst 2018

The UK government says they were poisoned with a nerve agent of a type developed by Russia called Novichok – the Russian government denies any involvement in the attack.

The British Council is the UK’s international organisation for cultural relations and educational opportunities. They create friendly knowledge and understanding between the people of the UK and other countries. They do this by making a positive contribution to the UK and the countries they work with – changing lives by creating opportunities, building connections and engendering trust.

The Council works with over 100 countries across the world in the fields of arts and culture, English language, education and civil society. Last year they reached over 65 million people directly and 731 million people overall including online, through broadcasts and publications. Founded in 1934, They are a UK charity governed by Royal Charter and a UK public body.

The British Council’s work in the arts involves the very best British and international artistic talent. They help increase audiences for international work in the UK and for UK work globally. The Council brings artists together and supports the development of skills and policy in the arts and creative industries. Through this work, they ensure that culture in its broadest sense plays a vital role in connecting with and understanding each other.

In these ways, the British Council builds links between UK people and institutions and those around the world, helping to create trust and lay foundations for prosperity and security around the world. They sponsor the British pavilion at the Venice Biennale as well as several high profile international art exhibitions promoting the visual arts, music and theatre.