Carolee Schneemann, multidisciplinary artist who transformed the definition of art, especially discourse on the body, sexuality, and gender has died age 79. Born in Fox Chase, Pennsylvania, in 1939 she began her career as a painter influenced by the then-popular style of Abstract Expressionism.

I was the first painter to choreograph movement images which would later develop as “kinetic theater.” -CS

With a career spanning over 60 years of invention, provocation, and canonical contributions to Postwar Art, Carolee Schneemann was a multidisciplinary artist who worked in painting, photography, performance, film, video, mixed media, and installations. A pioneer of feminist performance who transformed the very definition of art, Schneemann created work that was characterised by research into archaic visual traditions, pleasure wrested from suppressive taboos, and the body of the artist in relation to the social body. 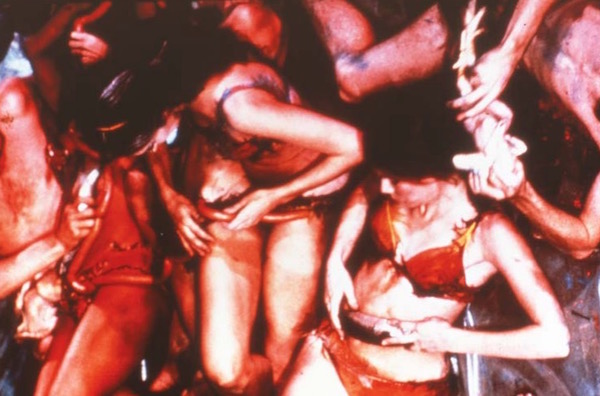 Schneemann’s best-known work was the sensational Meat Joy, the 1964 performance united semi-nude men and women who created a mass by rolling in meat, fish and blood.

Schneemann has published widely; books include Cezanne, She Was A Great Painter (1976), Early and Recent Work (1983); More Than Meat Joy: Performance Works and Selected Writings (1979, 1997). Forthcoming publications include Imaging Her Erotics, from MIT Press. A selection of her letters edited by Kristine Stiles is also forthcoming.

in 2017, Schneemann won the Venice Biennale’s Golden Lion award for lifetime achievement. She was recently the subject of an acclaimed career retrospective, “Carolee Schneemann: Kinetic Painting,” which travelled from the Museum der Moderne Salzburg in Austria to the Museum für Moderne Kunst Frankfurt am Main in Germany and MoMA PS1 in New York.