Designs have been finalised and planning permission granted for one of the largest artworks to be realised in the UK. Construction has started on the ‘Irn Curtain’, a 100-mile artwork by the Turner Prize-nominated artist David Mach RA. The artwork is made up of 400,000 shipping containers that will form a border between Scotland and England.

The Irn Curtain is beautiful, fascinating and disturbing in equal measure -DM

Described as “beautiful, fascinating and disturbing in equal measure,” the Irn Curtain is zigzagging its way across the border from the Solway Firth on the West coast of Scotland to Berwick, to Marshall Meadows Bay on its East Coast. Forming clusters as it goes that will house shops, galleries, hotels, restaurants and offices, the ‘wonder of the world’ is rising up out of our West coast like the basalt rock formations at the Giant’s Causeway.

Whilst many believe Hadrian’s Wall to be the border between Scotland and England, the ‘Curtain’ will sit slightly further north, where the true border is. Yet rather than a border splitting them apart, David Mach RA and the Curtain’s investors see it as a line ‘stitching ‘the two countries together, with that stitch offering up 100 miles of opportunity:

“Imagine it as that. Imagine it rising out of the sea by Gretna, the containers clustering together, becoming Chapels of Love, turning into Love Hotels, the world’s couples hot-footing it there to declare their devotion. Imagine them continuing on into the halls and malls created by the fattening out of the Curtain’s construction, turning it into the longest retail outlet in the world selling as much tartan, shortbread and whisky as you like and clothes and furniture, shoes and cars. You name it; the goods will be there to buy and sell.” – Thursday 1 April 2021 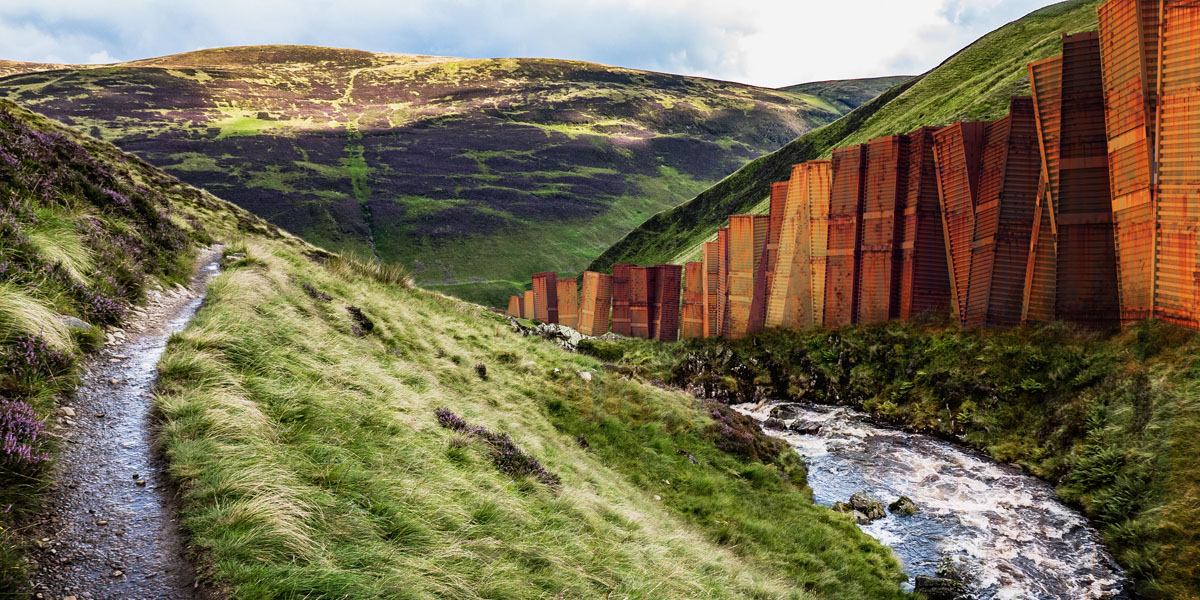 David Mach Born 1956, is known for his dynamic and imaginative large scale collages, sculptures and installations using diverse media, including coat hangers, matches, magazines and many other materials. The Scotsman describes his work as ‘big on gesture and big in proportion, it demands your attention and gets it’.studied at the Duncan of Jordanstone College of Art, Dundee from 1974 to 1979 and subsequently at the Royal College of Art, London from 1979 to 1982. He became a part-time lecturer in the Sculpture School, Kingston University from 1982 to 1993 and he was a lecturer at the Contemporary Art Summer School, Kitakyushu, Japan from 1987 to 1991. He has been Visiting Professor at the Sculpture Department, Edinburgh College of Art since 1999 and in 2000 was appointed Professor of Sculpture at the Royal Academy Schools, London.

Mach’s first solo exhibition was held at the Lisson Gallery, London in 1982. His international reputation was quickly established with solo and group exhibitions held in the UK and in countries throughout the world. Much of his work is commission-based, including Collage Portrait of Glasgow (commissioned by the Gallery of Modern Art, Glasgow), which was unveiled in March 2002 as part of a major solo exhibition of his work at the Gallery of Modern Art, Glasgow.

In 1988 Mach was nominated for the Turner Prize at the Tate Gallery, London, and in 1992 he won the Lord Provost’s Prize in Glasgow. He was elected Royal Academician in 1998 and lives and works in London.

Update: Yes, This was Artlyst’s April Fools prank 2021 Thanks to David Mac and Clare Henry for having such a great sense of humour!

Construction of the Irn Curtain is due for completion in December 2021.