Donald Baechler, who died in April, was one of the most promising artists of the 1980s. He was associated with a group of painters in New York that included Julian Schnabel, David Salle, Jean-Michel Basquiat and Philip Taaffe. Baechler created pieces by expressing an assertive naivety that staggered both the object and the subject; the work revealed itself as inevitably abstract.

The minimalism of the forms and volumes in the treatment of his paintings and sculptures contoured was strong enough to avoid superficial discussion towards them and permit them to attain their essence. 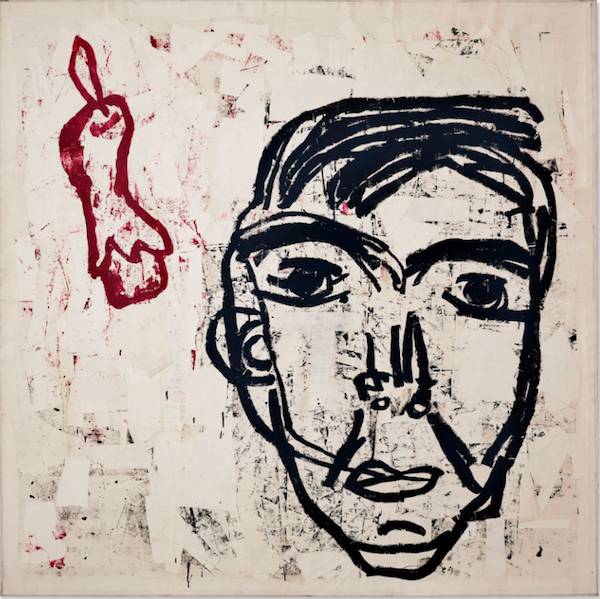 His themes appeared simplistic at first, synthesising all the qualities expected of a work of art to express issues as diverse as the essence of art and its history, childhood, the fetishism induced in the creation of art seen as an object of nostalgia and the complexity of the contemporary era.

By using black, he accentuated his paintings and sculptures’ powerful and robust structure. Although the execution process doesn’t seek perfection in the painter’s gesture or the rendition of volumes, his work is not intended to be a naturalist or perfect.

However, his works bear the traces of a moving and ongoing process. That is precisely the appeal of using collage, as an assemblage of childhood memories, due to its blurred but resurgent and haunting nature, as memories whose outlines are not precisely shaped yet present and impossible to hide.

Donald Baechler was born in Hartford, Connecticut, in 1956. His works were revealed to the public in the ’80s and are exhibited in the most prestigious collections, including the Whitney Museum of American Art, the Museum of Modern Art and the Guggenheim Museum in New York, the Museum of Fine Arts in Boston, the Stedelijk Museum in Amsterdam and the Centre Pompidou in Paris. Donald Baechler’s creative process begins amidst a vast collection of popular images and objects, the archives of years of photographing, looking and gathering. His paintings are condensed versions of that cumulative process, built-in fragments and layers to create what he called an “illusion of history.”

Donald Baechler died on April 4 in Manhattan at 65. The cause was a heart attack, according to Cheim & Read, the New York gallery.