The British-built Ai-Da the robot artist, created by  Aidan Meller and exhibited at the Design Museum last year, has been released after being impounded in Egypt. Border guards seized the artwork after suspicion was raised concerning her modem and inbuilt camera and the possibility of it being used for espionage. Authorities detained Ai-Da, named for the mathematician Ada Lovelace, for ten days at customs and border control.

The work is set to star in a sculpture exhibition taking place at the Great Pyramid of Giza, the first of its type in 4,500 years. The UK’s Embassy in Cairo is said to be pleased that the case has been resolved. “The Embassy is glad to see that Ai-Da the artist robot has now been cleared through customs,” they added in a statement. “Customs clearance procedures can be lengthy and are required before the importation of any artworks or IT equipment.” The exhibition, “Forever Is Now” runs until 7 November. Ai-Da’s clay sculpture addresses an interpretation of the Greek’ riddle of the sphinx.’ 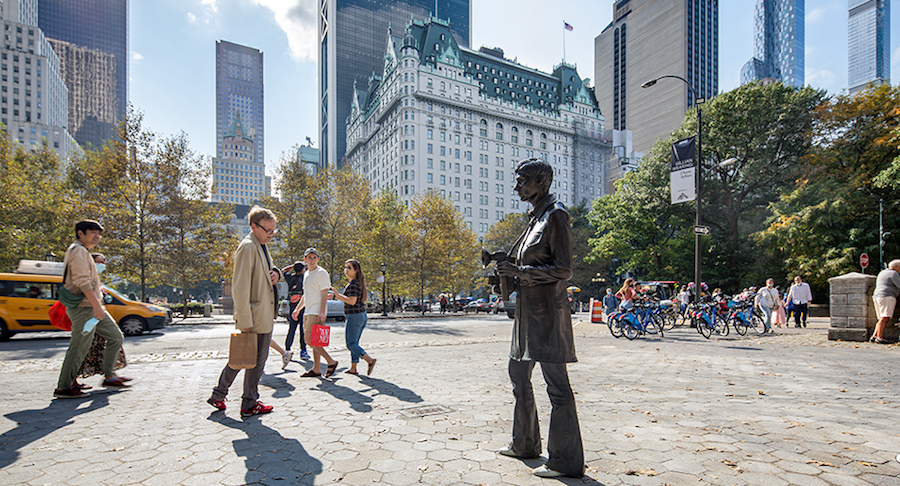 A life-size bronze sculpture of the ground-breaking photographer Diane Arbus by the British artist Gillian Wearing has been unveiled in New York.

This is not the first but the third major public sculpture by the Conceptual artist Wearing. Others depict Suffragist leader Millicent Fawcett in Parliament Square London and the first of these dismal creations, located in Birmingham, represents a ‘two mummy’ family. I have the utmost regard for the inclusive nature of these three works; however, the concepts inhabit the sort of soulless bronze shells endemic of most modern public sculptures. A plaque on the statue bears a quote by Arbus: “If you scrutinise reality closely enough, if in some way you really, really get to it, it becomes fantastic.” This banal work is a contradiction of Arbus and her lifework. Next time just print it!

Arbus was a lifelong New Yorker and often frequented Central Park, where she made photographs of everyday people. Wearing’s sculpture is on view in Doris C. Freedman Plaza at the southeast entrance to the park. The installation coincides with the Solomon R. Guggenheim Museum retrospective, Gillian Wearing: Wearing Masks, on view from 5 November 2021, to 4 April 2022. Diane Arbus shines a light on Wearing’s public art practice and is on view from 20 October 2021, through 14 August 2022, at Doris C. Freedman Plaza. 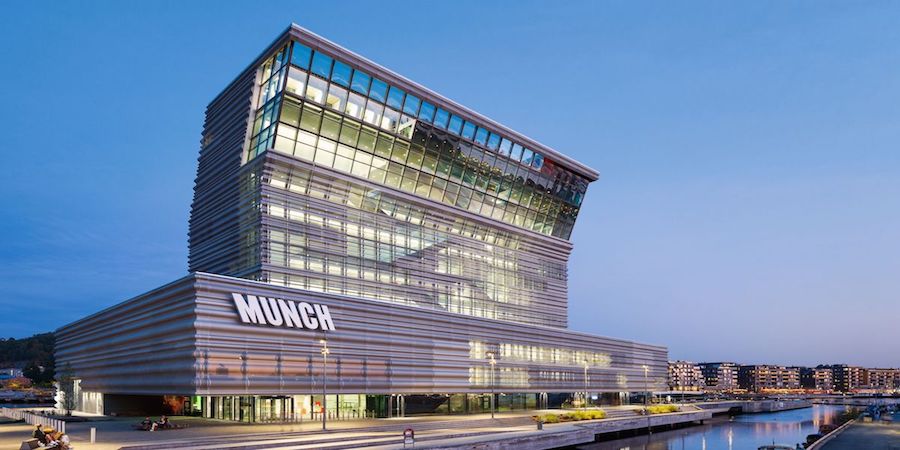 The new MUNCH Museum officially opens to the public today, Friday 22 October 2021, in Oslo. It is five times the size of the original building allowing visitors to see the most comprehensive collection of the artist’s work across 11 floors. T

The galleries are 26,313 square metres of spaces located on the edge of the Fjord. Estudio Herreros created the new museum on the waterfront, transforming the city’s skyline. The top floor opens up into an observation area, offering some of Oslo’s most spectacular views. The perforated, translucent aluminium façade reflects the changing colours and conditions of the Oslo skies. The new building has been created to nod to Edvard Munch’s connection to the Norwegian landscape and his penchant for painting outside in all seasons.

MUNCH’s collection, the core of which Edvard Munch donated to the city of Oslo upon his death, includes over half of Munch’s known works, including over 26,700 paintings, prints, photographs, drawings and watercolours by the artist, ranging from 1873 to 1944.

While Munch is best-known for The Scream, he also experimented with various media and techniques at the edge of modernism. In addition to the paintings, watercolours and woodblock prints for which he is best known, Munch bought a Kodak camera in 1902 and is recognised today as one of the first artists to experiment with self- portrait photography.

The museum’s collection also includes thousands of other items included in Edvard Munch’s original bequest to the city such as his printing plates and lithographic stones as well as thousands of letters and approximately 10,000 objects from his own personal belongings.

As well as allowing for greater opportunities to showcase Edvard Munch’s artworks, the new museum also hosts major temporary exhibitions by both Norwegian and international artists, exploring Munch’s enduring influence on generations of artists that have followed.

In her first major Scandinavian exhibition and the first exhibition to inaugurate the new museum, The Loneliness of the Soul explores Edvard Munch’s influence on Tracey Emin and how his oeuvre has shaped her work over several decades.

Showcasing Emin’s enduring fascination with Munch, this exhibition, curated by Kari Brandtzæg, allows for a dialogue between the two artists, with new works by Emin shown alongside pieces by Munch from the museum collection which Emin has personally selected.

The exhibition focuses on her work in painting, sculpture and neon text over the last decade, and also includes a selection of her early artworks, including My Bed (1998). Illustrating the profound impact that Munch’s artwork has had on Emin’s career, the exhibition brings to light Munch’s relevance for leading artists working today.