Eighty years ago today, on the 19 July 1937, the Nazis unveiled their solution to so-called ‘Degenerate Art’ by terminating the freedom of artists to express themselves and their creative genius.

‘Entartete Kunst’ – ‘Degenerate Art’ was an exhibition designed to ridicule the artists displayed, while churning up hate and outrage from the public. The show featured works and artists the Nazis considered ‘Un-German’ and the rest of the world considered ‘Avant-Garde’.

The exhibition was over hung in a condescending manner with painting being displayed in an uneven random manner and sculpture at heights making them difficult to view. The exhibition had quite the opposite effect and was widely visited and enjoyed by the public who queued for hours to enter the show.

The 112 artists involved in this first of many touring exhibitions around Germany and Austria, were not all German but their work hung in German museums, few as it happens were Jews, more were communists, but all were individuals who pioneered modern art as we know it today. 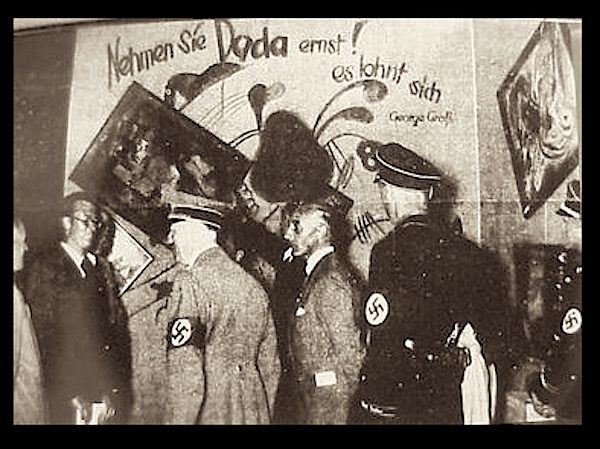 The Nazis put on two exhibitions very close to each other in Munich to highlight the disreputable ‘Degenerate’ and the favoured ‘Great German art exhibition’ (Grosse Deutsche Kunstausstellung), in the newly opened Haus der Deutsche Kunst – House of German Art.

According to newspaper accounts at the time, five times as many people visited the ‘Degenerate’ than the ‘German’ which is revealing.

Now the Ben Uri has 17 of the artists whose work was confiscated during 1937 as part of the cleansing of German museums and the visual arts (and culture) menu offered to German citizens and visitors by the authorities. We have 59 examples all searchable by artist name on our website. In an on-line exhibition each of the 17 artists have short biographies and one example of their work for your interest.

What is terrifying is that 80 years later under different uniforms and guises artistic censorship and discrimination still goes on right in front of our eyes across the news channels we watch every day.

Ben Uri invites you and all around you to review our memorial exhibition on our website and share it and our Social Media campaign with friends and family as 80 years ago is a blink of the eyes in historical terms and no one should forget the National Socialists led by Hitler was a democratically elected government in 1933.