A settlement may be close with Greece over the fate of the Parthenon Marbles (AKA Elgin Marbles). According to a Greek newspaper, an agreement to return the Sculptures, which have been in England since the early 19th century, is at “an advanced stage”. Ta Nea reported that the British Museum chair, the former chancellor George Osborne has been in high-level private talks directly with the Greek prime minister over the treasures.

For many years, Greece has called for the return of the sculptures. The British Museum stated it would “talk to anyone, including the Greek government”, to find a partnership. The Horniman Museum in south-east London has recently returned 72 items, including Benin Bronzes, to Nigerian ownership – making it the first in the UK to officially take such action on this scale.

The Marble sculptures were removed from the Parthenon temple in Athens by the British diplomat Lord Elgin in 1816. They were sold by Ottoman Empire officials

The iconic works include several relief panels from the temple frieze and the more three-dimensional pediment sculptures. They were created by the sculptor Phidias to decorate the 2,500-year-old temple.

The Parthenon was built nearly 2,500 years ago as a temple dedicated to the Greek goddess Athena, it was for a thousand years the church of the Virgin Mary of the Athenians, then a mosque, and finally an archaeological ruin. The building was altered and the sculptures much damaged over the course of the centuries. The first major loss occurred around AD 500 when the Parthenon was converted into a church. When the city was under siege by the Venetians in 1687, the Parthenon itself was used as a gunpowder store. A huge explosion blew the roof off and destroyed a large portion of the remaining sculptures. The building has been a ruin ever since. Archaeologists worldwide are agreed that the surviving sculptures could never be re-attached to the structure.

By 1800 only about half of the original sculptural decoration remained. Between 1801 and 1805 Lord Elgin, the British ambassador to the Ottoman Empire, of which Athens had been a part for some 350 years, acting with the full knowledge and permission of the Ottoman authorities, removed about half of the remaining sculptures from the fallen ruins and from the building itself. Lord Elgin was passionate about ancient Greek art and transported the sculptures back to Britain. The arrival of the sculptures in London had a profound effect on the European public, regenerating interest in ancient Greek culture and influencing contemporary artistic trends. These sculptures were acquired from Lord Elgin by the British Museum in 1816 following a Parliamentary Select Committee enquiry which fully investigated and approved the legality of Lord Elgin’s actions. Since then the sculptures have all been on display to the public in the British Museum, free of entry charge.

A mural by the graffiti artist Banksy was recovered after it was hacked from a wall in Ukraine. The group who tried to steal it from a bombed-out building have been arrested.

Reports said that the group cut off a section of board and plaster bearing the artwork of a woman in a gas mask. Police said numerous people were arrested at the scene in Hostomel, and the painting has been retrieved. The graffiti is undamaged, and police are protecting it, the governor of the Kyiv region, Oleksiy Kuleba, said on Telegram.

“These images are, after all, symbols of our struggle against the enemy,” he said. “These are stories about the support and solidarity of the entire civilised world with Ukraine.

“We’ll do everything to preserve this street art as a symbol of our victory.” Police published images of the yellow wall in Hostomel, with a large patch cut through to the brickwork. 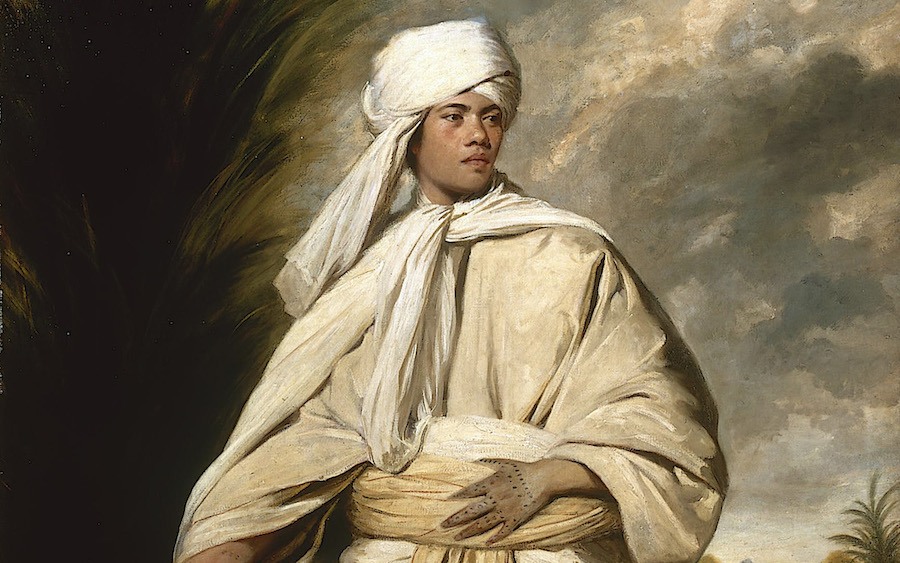 A painting valued at £50 million by Sir Joshua Reynolds depicting a Pacific Islander who travelled with Captain Cook on HMS Adventure to London in 1774 has raised half the amount needed to guarantee the painting stays in the UK.

The painting, ‘Portrait of Omai,’ was at risk of leaving the country unless a local buyer could be found. The painting is a full-length, life-size painting from the 18th century. It depicts one of the earliest and most celebrated Polynesian visitors to England in a flowing white Tahitian dress.

The Masterpiece is inextricably linked to the great voyages of discovery and exploration during this period. It offers an essential insight into the British reception, understanding, and representation of people from beyond Europe at that time.

The artist, Sir Joshua Reynolds, was one of the foremost British painters of his day. He became the first President of the Royal Academy, and his work and beliefs profoundly impacted subsequent generations of British artists. Portrait of Omai technically exemplifies Reynolds at best and is a masterpiece of 18th-century British painting.

Arts Minister Lord Parkinson of Whitley Bay said: The outstanding 18th-century Portrait of Omai by Sir Joshua Reynolds exemplifies the importance of the export bar process. This stunning painting is impressive for its scale, attention to detail, and valuable insights into the society in which Reynolds painted it.

I sincerely hope that a UK buyer comes forward to save this iconic painting for the nation.

The minister’s decision follows the advice of the Reviewing Committee on the Export of Works of Art and Objects of Cultural Interest. The committee agreed the painting is one of the great iconic works of the 18th century and is arguably the most significant portrait by one of the greatest British portraitists.

Committee Member Christopher Baker said: This magnificent British portrait has a global resonance. It illustrates the world’s connectivity in the late eighteenth century through exploration, the spread of colonial ambitions, and the fascination that high-profile cultural encounters inspired. Mai (c.1753-1779) (or ‘Omai’ as he was called in Britain) arrived in London from his home in Polynesia in July 1774 aboard HMS Adventure, which formed part of Captain James Cook’s second voyage. As a result, he was regarded as a celebrity and became the focus of written accounts and images, among which this sensational painting is undoubtedly the most potent.

Reynolds’ picture was exhibited at the Royal Academy in 1776, just after its subject returned to the Pacific. It is a highly romanticised image illustrating European perceptions and has a special status in the evolution of grand portraiture of the period. Securing it for a public collection would have profound benefits and allow the numerous and riveting historical and artistic narratives it embodies to be fully developed and shared.

The committee made its recommendation because the painting met all three of the Waverley Criteria: being closely connected with our history and national life; of outstanding aesthetic importance; and of exceptional significance for the study of British history and 18th-century art and, in particular, for the work of Sir Joshua Reynolds.

The decision on the export licence application for the painting will be deferred for a period ending on 10 July 2022 inclusive. However, this period may be extended until 10 March 2023 if a serious intention to raise funds to make an offer to purchase the painting at the recommended price of £50 million is expressed.