Relatives of the estate of the Mexican artist Frida Kahlo are considering suing the Frida Kahlo Corporation over claims it holds the rights to her image. Mattel, toy maker and creators of the Barbie Doll recently launched a range of new Barbie dolls based on “Inspiring Women”. A Kahlo doll was included among them. The range was highlighted yesterday on International Women’s Day.

In a statement, the family accused Mattel of using the artist’s image without authorised permission. But both the Frida Kahlo Corporation and Mattel have rejected the claims. Kahlo’s family issued their statement objecting to the doll. “Mrs Mara Romeo, the great-niece of Frida Kahlo, is the sole owner of the rights of the image of the illustrious Mexican painter Frida Kahlo,” it said. “The company Mattel does not have the proper authorisation to use the image of Frida Kahlo,” it said, threatening to take “necessary measures” against the California-based toymaker. “I would have liked the doll to have traits more like Frida’s, not this doll with light coloured eyes… It should be a doll that represents everything my aunt represented, her strength.” 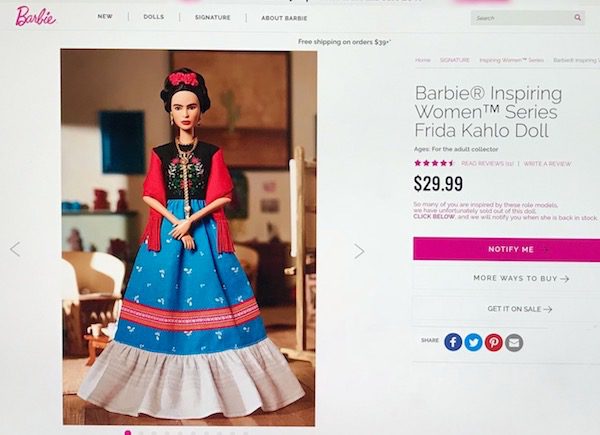 This is not the first time that the commercial activities of the Frida Kahlo Corporation are said to have angered some of Kahlo’s descendants.
“Mrs Mara Romeo, the great-niece of Frida Kahlo, is the sole owner of the rights of the image of the illustrious Mexican painter Frida Kahlo,” the family said in a statement.

Meanwhile, in June the V&A has announced a new exhibition Frida Kahlo: Making Her Self Up which they describe as a fresh perspective on Kahlo’s compelling life story through her most intimate personal belongings. The exhibition will present an extraordinary collection of personal artefacts and clothing belonging to the iconic Mexican artist Frida Kahlo. Locked away for 50 years after her death, this collection has never before been exhibited outside Mexico.

One of the most recognised and significant artists and women of the 20th century, she fashioned her identity through colourful clothes and jewelry. Frida Kahlo: Making Her Self Up will be the first exhibition outside of Mexico to display her clothes and intimate possessions, reuniting them with key self-portraits and photographs to offer a fresh perspective on her compelling life story. We will present an unparalleled insight into Kahlo’s life revealing some objects that have never been on show before.

Working in close collaboration with Museo Frida Kahlo, we will display more than 200 objects from the Blue House. Kahlo’s personal items including outfits, letters, jewellery, cosmetics, medicines and medical corsets were discovered in 2004, 50 years after being sealed in the Blue House by her husband Diego Rivera, the Mexican muralist, following her death in 1954. Exploring Kahlo’s highly choreographed appearance and style, these include 22 distinctive colourful Tehuana garments; pre-Columbian necklaces that Frida strung herself; examples of intricately hand painted corsets and prosthetics which will be displayed alongside film and photography of the artist as a visual narrative of her life.

Included in Kahlo’s make-up selection is her eyebrow pencil ‘Ebony,’ still within its original packaging, which she used to emphasise her signature mono brow, a defining feature of her self-portraits and her favourite lipstick, Revlon’s ‘Everything’s Rosy’ and red nail varnish. Her vividly-coloured cosmetics are striking in the celebrated portraits by photographer Nickolas Muray which show her wearing many of the clothes on display.

Kahlo’s Mexico and her sense of cultural pride following the Mexican Revolution (1910-20). An enthusiastic desire to embrace a national identity led to her interest in the art and traditions of indigenous people of the country. Kahlo used her striking appearance as a political statement, crafting her identity to reflect her own mestizo (mixed-race) identity and allegiance to Mexican identity.

Mexico flourished in the 1920s and 1930s as a liberal destination that attracted foreign artists, writers, photographers and documentary film makers, in what became known as the Mexican Renaissance. We will show photographs of traditions in clothing, architecture and the popular arts taken by Edward Weston and Tina Modotti in the 1920s that made an imprint on the Mexican imagination and its perception abroad. There will also be a wall of ex votos, from Kahlo and Rivera’s collection. These small votive paintings of popular art, made mainly in tin, offered to a saint or to a divinity in gratitude for the fulfillment of a miracle, informed Kahlo’s paintings.

On display will be garments from her collection: rebozos, a traditional Mexican shawl, huipiles, an embroidered square-cut top, enaguas and holanes, long skirts with flounces, and jewellery ranging from pre-Columbian jade beads to modern silverwork. A highlight will be the resplandor, a lace headdress worn by the women of the matriarchal society from the Isthmus of Tehuantepec region in Southern Mexico, paired with a self-portrait of Kahlo wearing it.

Artist Frida Kahlo is considered one of the great artists of the 20th century. She began painting after she was severely injured in a bus accident. Kahlo later became politically active and married fellow communist artist Diego Rivera in 1929. She exhibited her paintings in Paris and Mexico before her untimely death in 1954.