Frieze London 2017 will present more than 160 leading galleries from across the world who will be showcasing ambitious presentations by international emerging and established artists. The fair will be enhanced by a curated nonprofit programme of artist commissions, films and talks. The 15th edition of Frieze London takes place from 5–8 October, with a Preview Day on Wednesday, 4 October.

Curator Ruba Katrib (SculptureCenter, New York) will co-advise on the Focus section dedicated to emerging galleries; and Ralph Rugoff (Hayward Gallery, London) will curate Frieze Talks for the first time, exploring artists’ response to an age of ‘alternative facts’. The 2017 fair will also feature a new themed gallery section devoted to the legacy of radical feminist artists, curated by Alison Gingeras (independent curator). Frieze London 2017 once more coincides with Frieze Masters and Frieze Sculpture in The Regent’s Park, together forming the heart of Frieze Week, the most significant week in London’s cultural calendar.

‘The list of exhibitors for Frieze London is stronger than ever – from the emerging to the world’s most established ‘ – Victoria Siddall, Director, Frieze Fairs

Frieze Week in this city continues to be a vital hub for international galleries. Following the fantastic reception received by  The Nineties last year, I’m looking forward to another innovative, thought- provoking curated section, this time celebrating radical women artists as well as the ground-breaking role of their galleries. And for the first time, Frieze Sculpture will open in July, creating a free public exhibition of extraordinary outdoor works that will take us through to Frieze Week in October.’

Building on Frieze’s long-term commitment to supporting galleries throughout their development, this year four returning exhibitors who first exhibited at Frieze London in the Focus section will join the main section for the first time, including Clearing (New York), Fonti (Naples), Simon Preston (New York) and Société (Berlin). 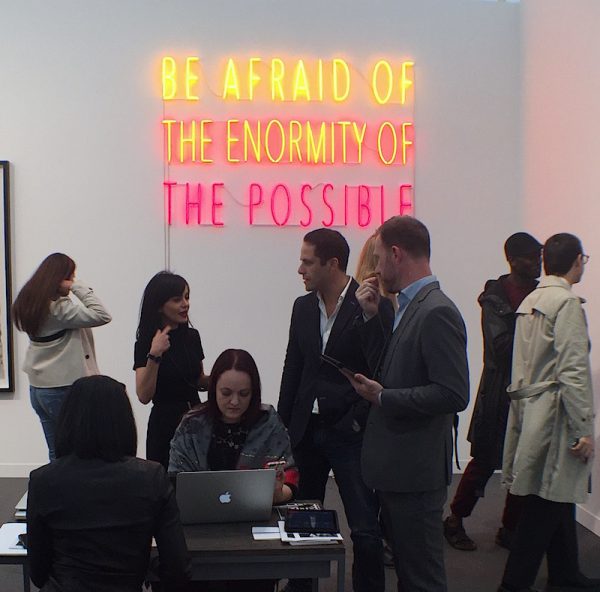 Sex Work: New for 2017, Sex Work: Feminist Art & Radical Politics is curated by independent curator and scholar Alison Gingeras. Featuring women artists working at the extreme edges of feminist practice since the 1960s, and the galleries who supported them, highlights from the section include: • Galerie Andrea Caratsch with Betty Tompkins ; • Blum and Poe with Penny Slinger; • Richard Saltoun with Renate Bertlmann; • Salon 94 with Marilyn Minter; • Hubert Winter with Birgit Jürgenssen. Alison Gingeras said: ‘This special section of Frieze pays homage to artists who transgressed sexual mores, gender norms and the tyranny of political correctness and were frequently the object of censorship in their day. Sex Work will also highlight the seminal role galleries have played in exhibiting the radical women artists who were not easily assimilated into mainstream narratives of feminist art.These galleries often blazed a trail for museum exhibitions. Many figures in this section such as Renate Bertlmann, Birgit Jürgenssen, Marilyn Minter, Penny Slinger and Betty Tompkins, were too transgressive to be included in anthologizing museum shows which arguably forged a consensual canon for important feminist art. The belated reception of these pioneering women has had a profound impact on many artists working today and resonate more than ever with the new feminisms that are taking shape in response to contemporary political realities.’

Focus section: Emerging Talents Bringing together 34 galleries from Cairo to Berlin, Focus features galleries aged 12 years or younger. Advised for the first time by Ruba Katrib (SculptureCenter, New York) in collaboration with returning curator Fabian Schoeneich (Portikus, Frankfurt), highlights include: • An installation-performance by Lloyd Corporation at Carlos/Ishikawa in which wholesale-style ‘lots’ of material are auctioned off to fair visitors • A new installation including a video essay by Hannah Black at Arcadia Missa, coinciding with the artist’s solo show at London’s Chisenhale Gallery; • Various Small Fires recreating a site-specific variation of The Harrisons’ ‘Survival’ series, inspired by research into adapting to climate change – in this case, a proposal for the indoor cultivation of fruit trees • Kraupa-Tuskany Zeidler (Berlin) with Anna Uddenberg whose uncanny figurative sculptures were a highlight of the Berlin Biennial 9 (2016)

Established in 2003 as the first acquisition fund connected to an art fair, the 2017 Frieze Tate Fund will provide £150,000 for Tate to acquire works of art at Frieze London this October. Tate has acquired more than 100 works at Frieze London, with nine artworks by Hüseyin Bahri Alptekin, Leonor Antune and Phillip Lai added to the collection in 2016. Supported by WME IMG, the artworks acquired by the fund will be announced during the fair.

Contemporary Art Society Collections Fund: The Contemporary Art Society Collections Fund at Frieze returns for a second year, following the successful launch at Frieze London 2016, which supported the acquisition of major works by John Akomfrah and Kader Attia for Middlesbrough Institute of Modern Art (MIMA). This year’s chosen beneficiary is the Towner Art Gallery museum (Eastbourne), which is looking to expand its significant collection, with work exploring the theme of landscape in a time of political change. The acquisition will be announced on Wednesday 4 October.

Art Fund returns as programming partner and will produce the Frieze Sculpture Audio Tour App, as well as a programme of educational tours to further encourage public engagement with Frieze Sculpture. In addition, the free Summer Art Map, featuring Frieze Sculpture, will be available at all Zone 1 London Underground stations from 3 July.

Frieze Talks: Curated for the first time by Ralph Rugoff (Hayward Gallery, London) Frieze Talks will explore how – in an age of ‘alternative facts’ – art and artists’ capacity to beguile, disorientate and disrupt conventional notions of ‘the real’ takes on new meanings. Featuring today’s most influential artists, writers, curators and thinkers, the full programme will be announced in September.

Frieze Week in London Coinciding with Frieze Masters, as well as Frieze Sculpture, the two fairs form the heart of Frieze Week – an international cultural event in early October, which includes special programmes mounted by galleries and museums across

London. Highlights include: • Thomas Ruff at the Whitechapel Gallery • ‘Soul of a Nation: Art in the Age of Black Power’ at Tate Modern and SUPERFLEX for the Hyundai Commission at the Tate Turbine Hall • Rachel Whiteread at Tate Britain • John Akomfrah and Jean-Michel Basquiat Barbican.