The Blue Boy an iconic masterpiece by Sir Thomas Gainsborough will return to Trafalgar Square, precisely one hundred years to the day since it was last seen in this country.

On 25 January 1922, the National Gallery and the nation said goodbye to Thomas Gainsborough’s (1727–1788) The Blue Boy (1770). Bought the previous year by rail and property businessman Henry E. Huntington, The Blue Boy went on display at the National Gallery as part of a farewell tour. During the three weeks, it was on display in Trafalgar Square, 90,000 visitors came to see the painting before its departure for California. 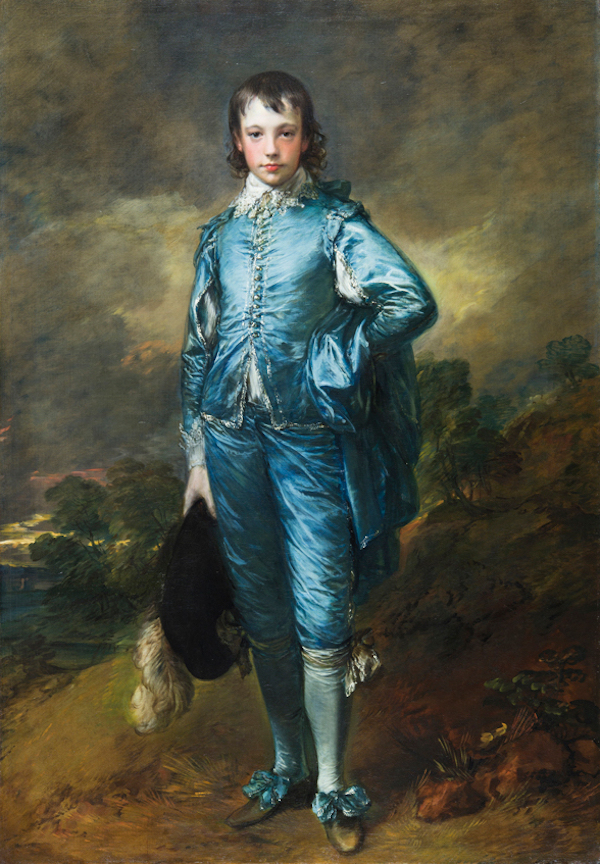 Before it left, the National Gallery’s then Director Charles Holmes wrote ‘Au Revoir’ on the painting’s reverse, in the hope that the painting would return one day. Now that dream is coming true as the painting is being generously loaned to the Gallery for an exceptional free exhibition.

The work is now owned by the Huntington Library, Art Museum, and Botanical Gardens in San Marino, California, where it has been on display for the past century. The popularity and influence of the painting has made it an icon, quoted by contemporary artists – including Kehinde Wiley (who will exhibit at the National Gallery at the same time) – and referenced in Hollywood films.

The Blue Boy has never been on loan – until now – and it is unlikely ever to be loaned again.

The Blue Boy represents the best of 18-century British art and is Gainsborough’s eloquent response to the legacy of Sir Anthony van Dyck (1599 – 1641) and grand manner portraiture – therefore, the display, Gainsborough’s Blue Boy, will not only reunite a British icon with the British public but also with grand manner paintings in the National Gallery Collection and beyond. This free exhibition in Room 46 will also include a select group of paintings that demonstrate the profound influence of Van Dyck on Gainsborough’s practice and identity.

Dr Gabriele Finaldi, Director of the National Gallery, London, says ‘The loan of Gainsborough’s Blue Boy to the National Gallery is an exceptional opportunity for visitors to see Gainsborough at his dazzling best. Rich in historical resonances, a painting of supreme poise and elegance, The Blue Boy is, without doubt, a masterpiece of British art.’

Karen R. Lawrence, Huntington President, commented ‘This masterpiece has made an indelible mark on both art history and popular culture, capturing the imaginations of a wide range of audiences. Given The Blue Boy’s iconic status at The Huntington, this is an outstanding loan, one which we considered very carefully. We hope that this partnership with the National Gallery will spark new conversations, appreciation, and research on both sides of the Atlantic.’

The National Gallery is one of the greatest art galleries in the world. Founded by Parliament in 1824, the Gallery houses the nation’s collection of paintings in the Western European tradition from the late 13th to the early 20th century. The collection includes works by Bellini, Cézanne, Degas, Leonardo, Monet, Raphael, Rembrandt, Renoir, Rubens, Titian, Turner, Van Dyck, Van Gogh and Velázquez. The Gallery’s key objectives are to enhance the collection, care for the collection and provide the best possible access to visitors. Admission free. More at nationalgallery.org.uk

The Huntington Library, Art Museum, and Botanical Gardens, collections-based research and educational institution, aspires to be a welcoming place of engagement and reflection for a diverse community.

Gainsborough’s masterpiece The Blue Boy returns to the UK – precisely 100 years, to the day, since it left 25 January – 15 May 2022 Room 46 Admission free