I first met the well known American kinetic sculptor George Rickey in 1982. In celebration of his 75th birthday. The Scottish Sculpture Trust led by Barbara Grigor, organised his first-ever major British exhibition in Glasgow, his childhood home. Over 50 works were installed in the city centre along both sides of the River Clyde – which I described in various articles for the Herald. I also hosted his 75th birthday party at my house with his wife Edie and son Philip in attendance.

Found by complete chance Triple L’ was rusting, trashed, dismembered with no protection

In 2019 his son was back here, drinking coffee with Barbara’s filmmaker husband Murray Grigor and others, to discuss the restoration of a valuable long lost sculpture. Now ‘Three Right Angles Horizontal: Triple L’, has been triumphantly installed in Queen’s Park huge boating pond. It’s a happy ending to a sorry saga. 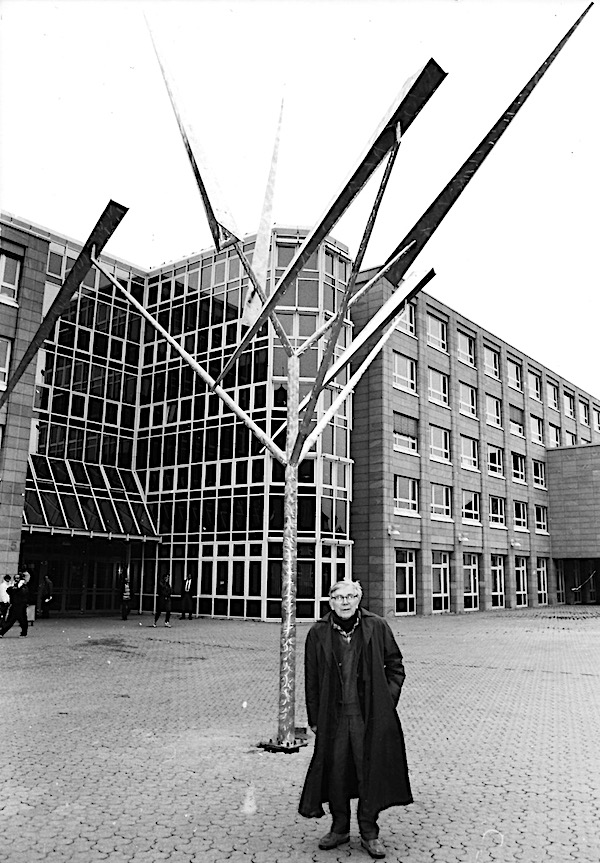 I wrote about this drama back in 1995 under the headline “Ungracious Neglect – a Scrappy Way to Handle Great Art.” Rickey’s works are often worth millions. Yet for nearly 40 years his generous 1982 gift was repeatedly misplaced, lost, damaged, forgotten, moved, dumped. In the end, it just disappeared.

Rickey’s pioneering contribution to kinetic sculpture in metal was inspired by the machinery and engineering of Clydeside. His endlessly moving, glinting, spinning metal pieces are mesmerising, hypnotic, fascinating, a conscious, bold, imaginative art. No surprise they are so popular and so many found in public places around the world. Rickey described kinetic art as “The means are movement itself: the end is a kind of order, a tectonic design of movement.”

His famous mobiles employ a system which is a variation of the gimbals used at sea. Rickey explained, “Essentially a universal joint, it permits objects to pitch and roll. As a boy, my clear purpose was to be an engineer.” His engineer father encouraged this, giving his young son a little steam engine, in parts, at Christmas. “Together, we assembled it, and I learnt the principles of the crank, valves and pistons then.” He loved the Clyde blacksmiths, the paddle steamers’ engine rooms with their ‘gleaming gyrations’ and of course, Kelvingrove’s model ships. Sailing in Scotland also taught him a lot.

Rickey’s family arrived in Scotland from Indiana in March 1913 when his father became manager of Singer Clydebank. Rickey was 6, returning to America only after education at Glenalmond and Balliol College Oxford. He told me he was delighted to have had a Scottish childhood. “It’s sentimental for me. I value what I learnt here.’ As Rickey’s sculpture is designed to move, if not in motion, the machined steel-bearings and joints rust and jam, ruining his works. Yet this is just what happened.

Found by complete chance in 1994, Triple L’ was rusting, trashed, “dismembered, stacked, piled in a muddy, fenced enclosure, with no padding or protection.” Grigor filmed this sad outcome through the imprisoning fence, zooming in on the stone inscription which highlighted Rickey’s generosity and the benefits he had received from west of Scotland engineering.

Rickey next appealed to the city, writing publicly in the Herald newspaper, “To whom can I turn? These works are far more easily damaged in storage than out in the open, where they are at home.” He wanted them, literally “up and swinging” or returned to him. It was a cry for help. “If Glasgow doesn’t want them, let other people enjoy them. Many places would love to have the sculptures.” Nothing was done.

By the following summer, most men would have sued. But Rickey, pragmatic and big-hearted, determined to make things easy for Glasgow. The city was known to want a major piece by him for its new 1996 Museum of Modern Art. Indeed the director approached Rickey in 1993 about commissioning a work and was quoted a price of £250,000.

Rickey’s next letter to the city, sent June 1995 proposed a resolution of the impasse. “I will offer to the City of Glasgow a choice between two different sculptures by me, to be approved by the city beforehand, as acceptable and appropriate for installation where the city chooses. The city will then return to me the sculpture now in storage. No money will pass either way.”

Rickey attached photographs. “I ask that the city choose the one it wants. I will promptly ship it. If the city wants advice or assistance in placing or installing the new sculpture, I will gladly offer it.” Lucky old Glasgow – yet still no response. This sad stalemate was highlighted in a 1995 TV film, Fakelore, by Grigor who, together with well-known sculptor George Wyllie, had filmed their discovery of the trashed metal at the Parks department store.

The sculpture’s fate remained unsolved. Rickey was awarded Glasgow’s Provost’s Prize in 1996 and died age 95 in 2002. By then, I was living in New York, writing for the Financial Times, and went to his Memorial Service held at the Guggenheim in October. By another twist of fate, my new American husband had been Rickey’s New York gallerist dealer for around 20 years. Though Rickey never introduced us, he did make three portrait drawings of him in Berlin on a snowy day in 1969!

Rickey had ended his letter “In sad disappointment, but not yet despair.” Luckily he did not know that Triple L would be yet again be misplaced, lost till a recent 2018 audit. Thus began the long process of restoring Triple L involved complex logistical and engineering details, replacing framework, supports, bearings, sockets, steel ‘arms’, knuckle boxes, flanges, lead ballast and such, plus obstacles from nesting baby birds to ponds with too much or too little water!

Rickey was a perfectionist, applying the highest engineering standards to his kinetic creations with their endlessly swinging, swivelling, rotational arcs and curves. The Queens Park piece, three sets of stainless steel arms which revolve through 360 degrees, is designed to float low over water.

Rickey always bragged about the professionalism of Glaswegian engineers. This expertise, courtesy of Covanburn Ltd, has saved the day, helped by the Rickey Estate in East Chatham, New York. Now, this important sculpture can delight the next generation of visitors to Glasgow’s parks. I hope George is looking down to see one bright, gleaming, rotating positive for 2021.