Gillian Ayres one of the leading British abstract painters of her generation has died age 88. Born in 1930, she studied at Camberwell College of Art between 1945-50 and worked initially in London, later moving to Wales and then to Cornwall, where she lived for many years. As well as the vibrant, heavily worked canvases for which she is best known, she was also a dedicated printmaker.

“I want an art that’s going to make me feel heady, in a high-flown way. I love the idea of that. I’d use the word spiritual. I’m not frightened of all that.” – GA

Her Gallery Alan Cristea wrote on their website today, “It is with great sadness that we report the death of Gillian Ayres who died earlier today in a hospital in North Devon. Our thoughts are with her friends and family. 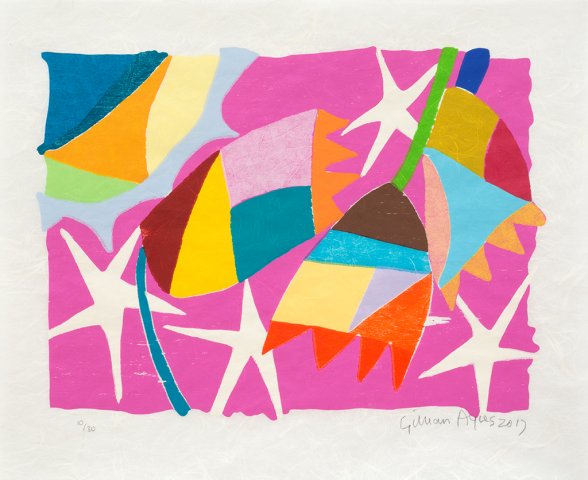 Gillian Ayres’ first solo show was at Gallery One, London, in 1956, and her work was featured in many key group shows thereafter, including the Whitechapel Art Gallery’s seminal British Painting in the 60s in 1965. Her solo shows include the Museum of Modern Art, Oxford, 1981; Serpentine Gallery, 1983; the Tate Gallery, London, 1995; the Royal Academy of Arts, London, 1997; Jerwood Gallery, Hastings, 2012 and at the National Museum Cardiff, Wales; Tremenheere Sculpture Gardens, Penzance and China Central Academy of Fine Arts (CAFA), China in 2017. She was nominated for the Turner Prize in 1989.

She taught at St. Martin’s School of Art and the Royal College of Art and was made a Royal Academician in 1991. Ayres was appointed Commander of the Order of the British Empire in 2011. Her work can be found in the permanent collections of the British Museum, Tate and the Victoria and Albert Museum, London, the Museum of Modern Art, New York and the Yale Center for British Art, Connecticut.