Fire crews have spent a third day at the scene of the latest fire to hit the historic Glasgow School of Art. The building was undergoing a £35m refurbishment after a fire destroyed the renowned C R Mackintosh library in 2014.  Glasgow, which earned its reputation as the ‘Tinderbox City’ in the 19th century has lost a key buildings of international interest and one of the finest examples of Art Nouveau architecture in the world.

“The fire has been a devastating blaze, much worse than the one that took hold of the Mackintosh building four years ago.” – Nicola Sturgeon

Fire crews are still working to extinguish the blaze which has devastated the School of Art. Thermal imaging has been used in the aftermath. The fire also badly damaged the nearby O2 ABC music venue and the Glasgow School of Art nightclub. It has now largely been contained.

The fire-ravaged structure of the Glasgow School of Art may have to be demolished, a leading construction expert has warned. Billy Hare, a professor of construction management, said there was a “growing consensus” the globally-significant building may have to be pulled down, the BBC has reported. 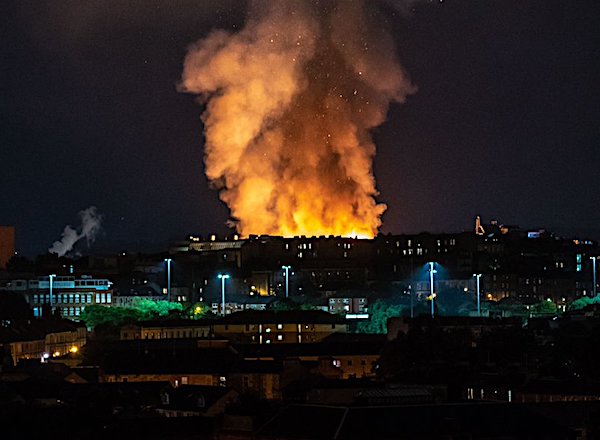 It is too early to speculate on the cause, adding that forensic experts would not be able to gain access to the building until it had been made safe. Sturgeon described the damage as “heartbreaking”.

“We will remain on the scene for as long as it takes – we are absolutely committed to preventing any further damage to surrounding properties and ensuring the area is made safe,” A spokesperson for the fire department stated. 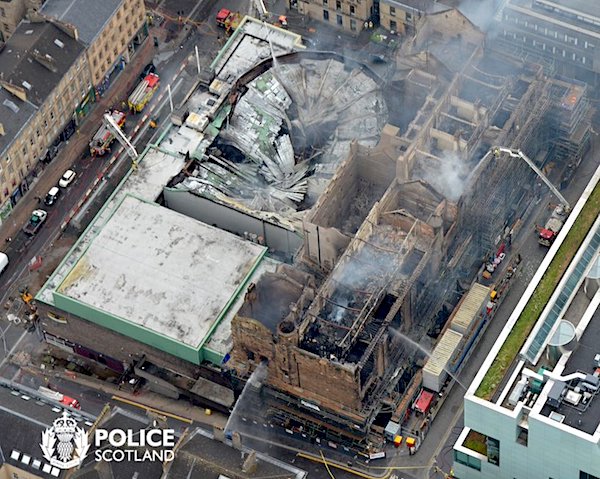 “A Glasgow School of Art project team created a digital recording reconstruction of the whole building, not just the bit that was affected before, down to the nearest millimetre, outside and in, using photos and measured drawings.” A spokesperson said, “I would be very surprised” if the building had to be knocked down and rebuilt, saying the walls could instead be reinforced.

Born in Glasgow on 7 June 1868, Mackintosh was apprenticed to a local architect John Hutchison, but in 1889 he transferred to the larger, more established city practice of Honeyman and Keppie. In 1896 Mackintosh gained his most substantial commission, to design a new building for the Glasgow School of Art. This was to be his masterwork. Significantly, the building was constructed in two distinct phases, 1897-99 and 1907-09, due to a lack of money. Stylistically, the substantial delay in completion offered Mackintosh the opportunity to amend and fully integrate his original design (of 1896) which owed much to Scotland’s earlier baronial tradition with a second half to the building that looked very much to the 20th century through its use of materials and technology. Most dramatic of all the interiors was the new Library (completed in 1909), which was a complex space of timber posts and beams. Its construction owed much to traditional Japanese domestic interiors but ultimately the building was an eclectic mix of styles and influences. Apart from being one of the finest examples of Art Nouveau architecture, the building is a major tourist attraction drawing millions of visitors to the city.