The 59th Venice Biennale’s top prize, the Golden Lion, has been awarded to Great Britain’s Sonia Boyce OBE RA for Best National Participation at La Biennale di Venezia 2022. The work for her exhibition ‘Feeling Her Way’ at the British Pavilion combined video and sound mounted on collaged installations and wallpaper. Simone Leigh from the US won the Golden Lion for the best participant in The Milk of Dreams exhibition, curated by Cecilia Alemani. Her monumental 16ft-tall sculpture, The Brick House (2019), represents a Black female figure standing at the exhibition entrance. Leigh transformed the US pavilion into a grass hut containing her oversized ceramic works. Her work at the Arsenale backed up her earning the award. There were also two special mentions for artists in the central exhibition. The lifetime achievement awards for artists in the main show were given to Cecilia Vicuña and Katharina Fritsch.

The artwork focuses on the vocal experimentation of five outstanding black female musicians as they embody feelings of power, freedom and vulnerability. Awarding the accolade, the jury said: “Sonia Boyce proposes … another reading of histories through the sonic. In working collaboratively with other black women, she unpacks a plenitude of silenced stories.”

On receiving this award, Sonia Boyce said: “This is momentous, and utterly overwhelming. I want to say thank you to everyone for their support. Their generosity has been beyond my expectations. Even more so to the great team I have been fortunate to work with. The performers in Feeling Her Way – Poppy Ajudha, Jacqui Dankworth MBE, Sofia Jernberg, Tanita Tikaram and Errollyn Wallen CBE – are stunning. They connect us in ways that are joyful, soulful and necessary. Venice is living up to its reputation as the city of dreams.”

Emma Dexter, British Council Director Visual Arts, Commissioner of the British Pavilion and Chair of the British Pavilion Selection Committee, said: “As Commissioner of the British Pavilion I could not be more delighted that Sonia Boyce’s Feeling Her Way has been recognised in this way – Sonia made a work for the Biennale that speaks of hope, experiment, joy and freedom, and the importance of remembering and celebrating women’s achievements and creativity. It is also highly significant that an artist who was part of the Black British Art movement of the 1980s has been honoured in this way – thereby bringing this crucial part of British art history into an international spotlight. On behalf of the whole British Council I congratulate Sonia Boyce on this wonderful achievement!”

Curator Emma Ridgway, (Shane Akeroyd Associate Curator) of the British Pavilion at Biennale, said: “It is such an honour to be the curator of Sonia Boyce’s Feeling Her Way – I am thrilled that her outstanding collaborative artistic practice has been recognised with this wonderful award. Sonia Boyce is so deserving of this accolade as her significant cultural contribution spans her work as an artist, academic and educator.”

Sonia Boyce’s Golden Lion winning British Council Commission for the British Pavilion, Feeling Her Way, immerses visitors in the collaborative dynamism of five Black female musicians (four British, one Swedish) brought together by the artist to improvise, interact and play with their voices. Colour-tinted video works take centre stage among Boyce’s signature tessellating wallpapers and golden 3-D geometric structures, which bring the audience into the work through their highly reflective surfaces.

The British Council has been responsible for the British Pavilion at the International Art and Architecture Exhibitions of La Biennale di Venezia since 1937, showcasing the best of the UK’s artists, architects, designers and curators. These exhibitions, and the British Council’s Venice Fellowships initiative introduced in 2016, help make the British Pavilion a major platform for discussion about contemporary art and architecture. A panel of visual art specialists from across the UK selected the artist for Biennale Arte 2022.

Sonia Boyce OBE RA was born in London, UK in 1962, where she continues to live and work. In 2019, the artist received an OBE for services to art in the Queen’s New Year Honours List, aswell as an Honorary Doctorate from the Royal College of Art.

In 2016, Boyce was elected a Royal Academician, and received a Paul Hamlyn Artist Award. Between 2012 – 2017, Boyce was Professor of Fine Art at Middlesex University and since 2014 she has been Professor at the University of the Arts London. As the inaugural Chair of Black Art & Design she led on a 3-year research project into Black Artists & Modernism, which led to a BBC documentary Whoever Heard of a Black Artist? Britain’s Hidden Art History (2018). Recent solo exhibitions include In the Castle of My Skin, Eastside Projects, Birmingham, UK (2020), touring to Middlesbrough. In 2015 she was included in All the World’s Futures, the International Exhibition of the 56th Venice Biennale, curated by Okwui Enwezor. Her work is held in the collections of Tate. 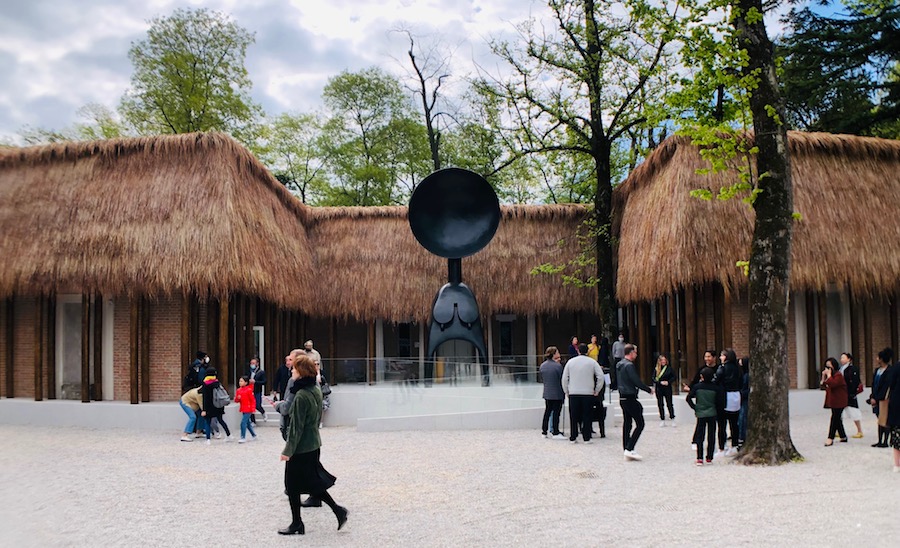 Simone Leigh’s practice incorporates sculpture, video, and installation, all informed by her ongoing exploration of black female-identified subjectivity. Through her investigations of visual overlaps between cultures, time periods, and geographies, she confronts and examines assumptions about the female body, race, beauty, and community. For the artist’s first exhibition with Hauser & Wirth, coinciding with Zurich Art Weekend, Leigh will present all new sculptures, including ceramic busts, raffia skirted figures, and new bronze works.

Simone Leigh’s practice incorporates sculpture, video, and installation, all informed by her ongoing exploration of black female-identified subjectivity. Through her investigations of visual overlaps between cultures, time periods, and geographies, she confronts and examines assumptions about the female body, race, beauty, and community. For the artist’s first exhibition with Hauser & Wirth, coinciding with Zurich Art Weekend, Leigh will present all new sculptures, including ceramic busts, raffia skirted figures, and new bronze works.

She works in a mode she describes as auto-ethnographic, employing materials, forms and sculptural traditions of West and South African provenance. Additionally recognisable within Leigh’s sculptural language are references to early African American forms, such as the face jugs of the American South, as well as Americana used to essentialise the black body, production of which spiked in the USA in the 1890s. These objects, such as the ‘Mammy’s cupboard’, were later popularised during the Jim Crow era, as the exaggerated creolisation of facial features in urns, jars, and bowls came to signify the representation of Blackness in America.

For this exhibition, the artist’s first major show in Switzerland, Leigh will present the monumental bronze sculpture ‘Sentinel (Gold)’ (2021), a material the artist began using in 2018. Standing at 10 feet (3 metres) tall and encased in gold leaf, this large-scale sculpture continues the artist’s ongoing exploration of the social reality that arises from the use, consumption, and creation of objects, and the communities that they serve. Atop an abstract but recognisably female body sits the face of a spoon in place of the figure’s head. The work takes inspiration from an object used in fertility rituals and a category described in West African Art as a power object, something that acts either through formal significance or ritual use. The elongated form inverts the idea that Black women are innately strong and invulnerable and, by rendering the work at an architectural scale, Leigh elevates the object’s traditional functionality. Moreover, by encasing the object in gold leaf, Leigh evokes the history and politics of goldmining on the African continent. She comments, ‘As an artist, African art and vernacular objects are a means of exploring a multitude of themes, particularly the notion of women’s work, authorship, anonymity, and other ways in which we perceive culture and value.’

A key part of the exhibition will be several new raffia skirted figures with ceramic torsos. Referencing dwellings and cultures across continents, these new works speak to ideas of habitat, architecture, and material culture. Leigh says: ‘Since my early 20s I have been interested in architecture as the ultimate material culture. Speaking to form, history, use and labour – carrying information from one generation to the next.’ The artist’s use of architectural structures and materials found in African cultures including raffia and ceramic, a natural yet challenging material to work with, continues her exploration into production and in particular the dichotomy of women’s labour. Looking to artists such as Beverly Buchanan and Noah Purifoy who reference the dwellings of the Global South in their practice, Leigh is currently developing her use of raffia as an exploration of marronage, a term which refers to a strategy of resistance by those who removed themselves from the plantations and created hidden, independent settlements and communities in swamps of the Southern states. For Leigh, the concept of hiding in plain sight could be considered a state of being that has subsequently informed African American artists and the diaspora.

Leigh’s investigation of make-shift dwellings is continued in a new Sphinx work, made from bronze and platinum. The form imitates the structure of a quonset, a basic corrugated building mass produced during World War II for the war effort in Europe and the South Pacific. As with her raffia skirted figures, the artist combines this architectural structure with the abstracted female form, exploring the relationship between the Black female body and the historical and social contexts that it appears in. However, the work does not prioritize the physical form as its subject matter – the facial features are simplified and rendered anonymous. Rather than seeking to represent a singular person or figure, Leigh depicts many things simultaneously: a state of mind, an interior or external experience, an invisible history.