Has Grayson gone mad? Has Trump lost it?  Is Taylor Wessing heading for an all-women final. All the news in brief

The Turner Prize-winning artist Grayson Perry has said in an interview that the consequences of coronavirus on culture would lead to “a bit of deadwood” being trimmed from the arts scene.

“I think every part of life has probably got a bit of fat that needs trimming, a bit of deadwood,” he told The Arts Society magazine. “It’s awful that the culture sector has been decimated, but I think some things needed to go.”His comments have attracted a torrent of outrage from some in the arts, but others backed him up.

He lamented; “Too often, the audience for culture is just the people making it – theatres with whole audiences of actors, or exhibitions only put on to impress other curators”. “With Covid, it’s been like turning a computer off and on again, and seeing which files reappear. Some of them we don’t really give a damn about. What’s interesting is what might not re-emerge.” These comments have not gone down well with many sectors of our industry. 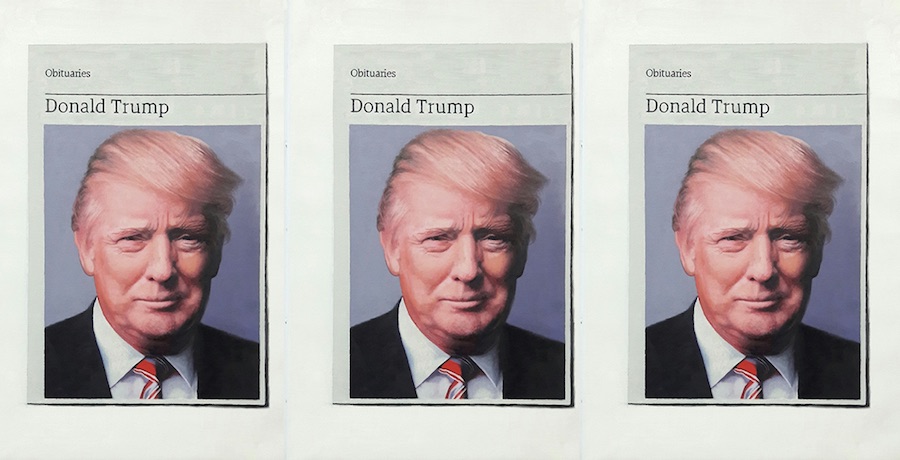 The London based artist Hugh Mendes has created his most controversial image to date. Known internationally for his realistic depictions, inspired by obituaries which appear in the Guardian/Observer Newspapers, this painting, one of his first living/dead subjects depicts Donald Trump’s political obituary.

“My depiction of President Trump is in the style that I am known for and that is recreating obituaries out of the newspaper. This is the first I have painted of a living subject, in many years. Maybe it’s just a statement that Trump is ‘a sitting duck President’.” Whatever the sentiment, the painting has pre-sold to a German collector, for an undisclosed figure.

“Newspapers create ‘advance obituaries’ so why shouldn’t an artist do the same”, he explained adding; “This cathartic work of art reminded me of a quote used in the film ‘Field of Dreams’, “If you build it (a ballpark) people will come. So I thought, maybe if I painted this subject Trump would just go away!”; The artist stated in an exclusive chat with Artlyst. 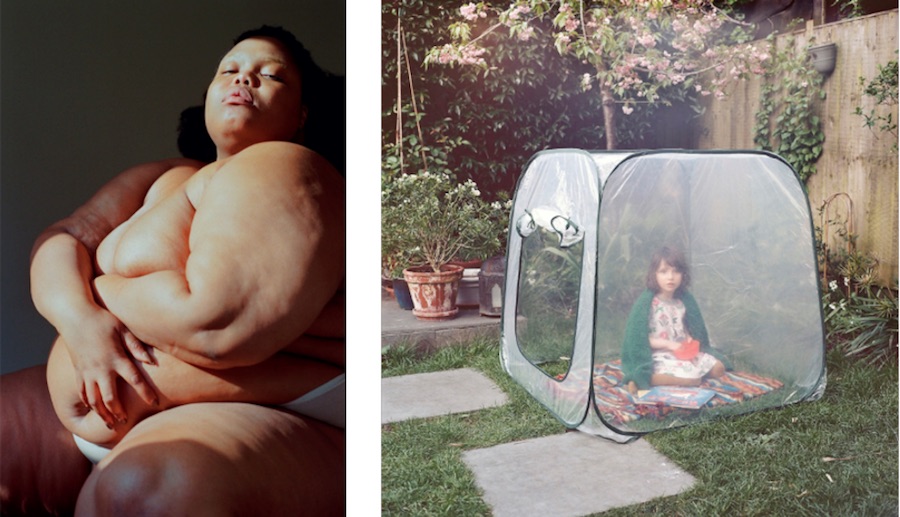 Three photographers have been shortlisted for the Taylor Wessing Photographic Portrait Prize 2020, the international photography award organised by the National Portrait Gallery, London. Judged anonymously by a panel of judges including Edward Enninful, editor-in-chief of British Vogue and photographer Mark Neville, for the first time all the prize-winning photographers are women.

The shortlisted photographs include a portrait of model, plus-size advocate and Instagram influencer, Enam Ewura Adjoa Asiama; an image of an artist’s three-year old-daughter in her garden during lockdown, and a series of black and white portraits of London school leavers dressed up for their cancelled end of year prom.

The annual Taylor Wessing Photographic Portrait Prize, now celebrating thirteen years under Taylor Wessing‘s sponsorship, is one of the most prestigious photography awards in the world and showcases new work submitted by some of the most exciting contemporary photographers. The winner of the first prize will receive £15,000. The second prize-winner receives £3,000 and the third prize £2,000. The winner will be announced on the Gallery’s social media channels on Tuesday 24 November 2020.

The following three photographers have been shortlisted for the Taylor Wessing Photographic Portrait Prize 2020:

Lydia Goldblatt was born in 1978 in London where she continues to live and work. She studied for a Masters Degree in Photography at London College of Communication. Her work has been exhibited and published internationally with group and solo shows in the UK, France, Germany, the Czech Republic, Greece, China and Malaysia. This is the first time she has been selected for the Taylor Wessing Photographic Portrait Prize exhibition.

Lydia’s shortlisted portrait Eden is part of a larger series made during 2020, titled Fugue. Created with four people within a 50 metre radius of her home, the work draws on mothering and family life as a central theme, and is driven by her need to explore and respond to the fundamental themes of intimacy and distance, brought to the fore through lockdown and Covid-19. As Lydia explains: “In such close, sometimes blissful, sometimes painful proximity to my children, I am aware of all that remains unknown. We are fused and separate, elusive. The child protected but alone in her den, the perfect spring blossom, articulate a psychological suspension in which both joy and fear oscillate.”

Yolanda Y. Liou is a 30-year-old, Taiwan-born photographer and moving image maker, based in London & Brighton. Her work has been featured in publications including The British Journal of Photography, i-D, and It’s Nice That. Her commissioned fashion work includes GQ, Marie Claire and Rouge Fashion book. This is the first time she has been selected for the Taylor Wessing Photographic Portrait Prize exhibition.

Yolanda’s shortlisted portrait is from a collaborative on-going project Thank You For Playing With Me with artists Enam Ewura Adjoa Asiama (the sitter) and Vanessa Charnell Marshall Russell. Speaking about the photograph, she highlights how it captures the uncompromising energy and confidence of the sitter: “The expectation of being skinny as standard is relentless in Asian culture. I’ve experienced the stress of this since a very young age. I was taken by Enam’s confidence and charisma. A key component of the photo was to demonstrate self-love and being comfortable with who you are in your own body.”

Alys Tomlinson for Samuel, Jack and Jameela from the series Lost Summer

Born in 1975 in Brighton, Alys Tomlinson lives and works in London. She studied photography at Central Saint Martin’s College of Art and Design. Alys was selected for the Taylor Wessing Photographic Portrait Prize exhibition in 2017 and won the Sony World Photographer of the Year Award in 2018. Her book Ex-Voto, the culmination of a five-year photographic journey to Catholic pilgrimage sites in Ireland, Poland, and France, was published in 2019.

Alys’ shortlisted series Lost Summer was born out of her frustration at not being able to travel for work. She decided to photograph local teenagers whose proms were cancelled, dressed up in what they would have worn, but captured in their gardens, backyards or local parks. Reflecting on the works Alys says: I feel that there is a vulnerability and sadness to the portraits, but also a resilience. The school year ended abruptly, with no opportunity to say goodbye to friends and nothing to mark the occasion of leaving school. I wanted to photograph each teenager framed by nature, merging their inner and outer worlds. There is a quietness to the images and they represent a loss and longing, but also celebrate each teenager as an individual, navigating this extraordinary time.”