I’m what you could call a seasoned Frieze regular. I may have missed the first London fair but I was soon sucked into the great black hole of mega-international art fairs and beamed myself out beyond London to Art Basel and Art Basel Miami Beach, not to mention the first Frieze in New York.

Galleries have joined the Instagram game. Stands are clearly designed to cater for this phenomenon – PCR

All of the fairs are currently going through a game-changing transition and I don’t think it’s entirely the fault of the fair organisers. I blame the dealers themselves. This year’s fair is not so much about a good hang with a showstopper piece, usually by an artist who is currently this season’s flavour of the month. It is about a new ‘look at me’ aesthetic which rather than blending in a consistent flow from booth to the next stand the fair has become a frantic struggle to out-garish thy neighbours with something brighter, something more psychedelic, something blingier. 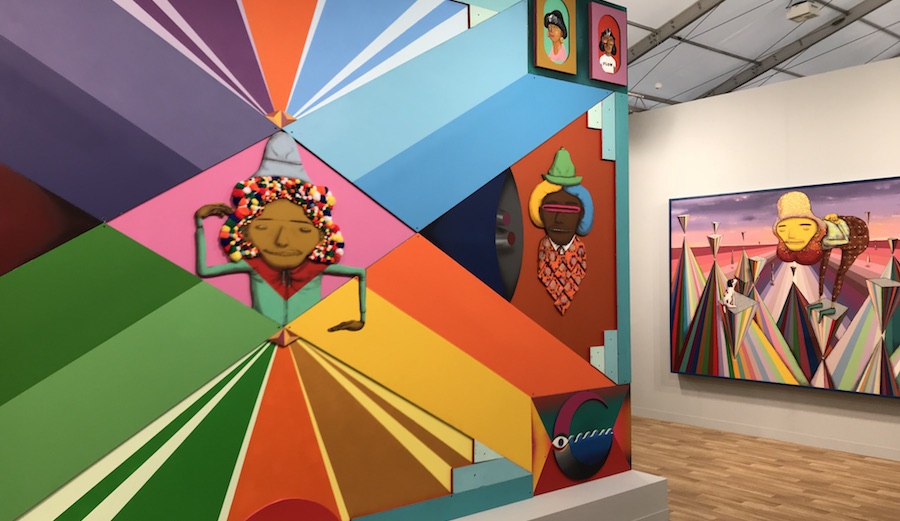 When not addressing issues such as the gender gap in the art world, migration, race relations and white male privilege Frieze has become clogged with either minimalism or maximalism depending on the gallery.

In the past, this was less evident on the stands of the more established galleries but a few years ago all had changed. Perhaps it was Gagosian with his Jeff Koons’ solo exhibition or the appearance of a giant red Anish Kapoor on Lisson or was it 2016’s Pink Project: Table by Portia Munson at P.P.O.W Gallery. I really can’t pinpoint the exact timing but it seemed to coincide with the onset of the Instagram generation and needs to stop now! 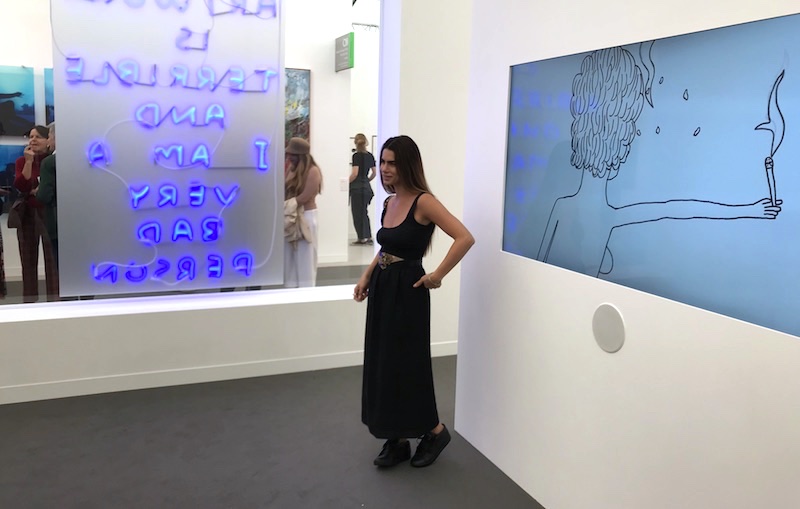 Art Fairs are becoming crass and ugly and so are the fairgoers. Frieze’s VIP opening day was as crowded as an Oxford Circus tube train at rush hour. Sure the core collectors were there at 11:00am and yes there was some interesting work by obscure artists from the nether-regions of the planet to look at and buy. But there was also a slightly seedy crowd of well healed young people whose main ambition was to get in as many Instagrams as possible. They posed in front of work that served as a backdrop for their carefully chosen outfits and completely impractical shoes. They came in twos or threes. They took selfies or photos of each other mainly from above pouting and laughing. I’m not saying that art should be approached with reverence but please give it some sort of respect. Galleries have joined the Instagram game. Stands are clearly designed to cater for this phenomenon. But don’t lose sight, ‘I am not a backdrop I am an installation’ has become my mantra.

Frieze now sports a hilarious VIP programme with a two-day preview, staggered entry times and no regular VIP lounge provided. Unless you are on the list of the Deutsche Bank wealth management lounge or the BMW lounge (other than 5:00pm where they actually offer cardholders a glass of Ruinart) forget any special privileges. Eat at Gails… On the opening day, everyone is a VIP anyway or you wouldn’t be there. 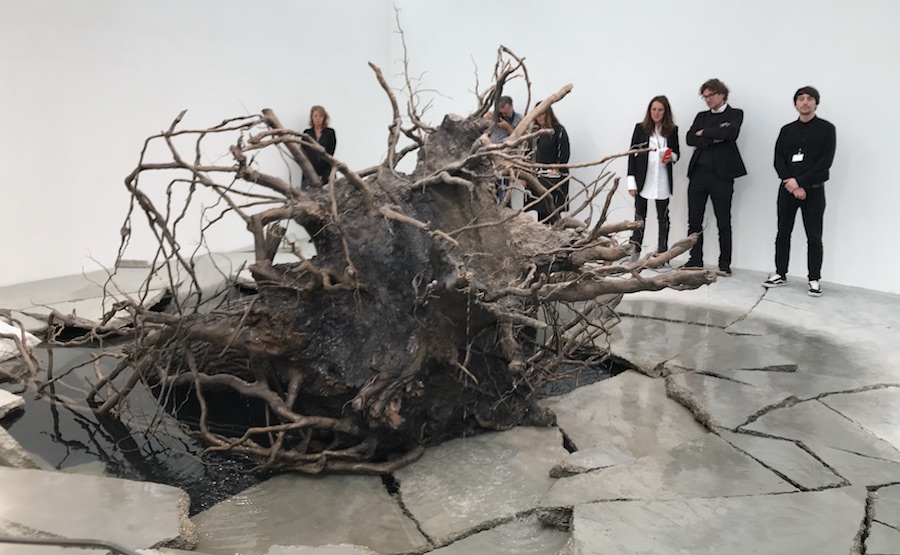 Frieze takes elitism to the next level with a Tracey Emin curated special exhibition celebrating Female Political Empowerment held in Deutsche Bank wealth management lounge. It includes Kara Walker, Marlena Dumas and of course Tracey herself who has created a special edition postcard which benefits domestic abuse charities. Seeing this exhibition is tricky as you need to have a Deutsche Bank wealth management pass to view.

Don’t get me wrong there is a shining light at the end of the marquee which includes an excellent talks programme, ‘Frieze Talks’, a dynamic series of panel discussions, conversations and keynote lectures. With subjects like Social Work featuring eight women artists who challenge the status quo and the role of autobiography in art with international participants including Laurie Anderson, Nan Goldin, Kemang Wa Lehulere and Olivia Laing. 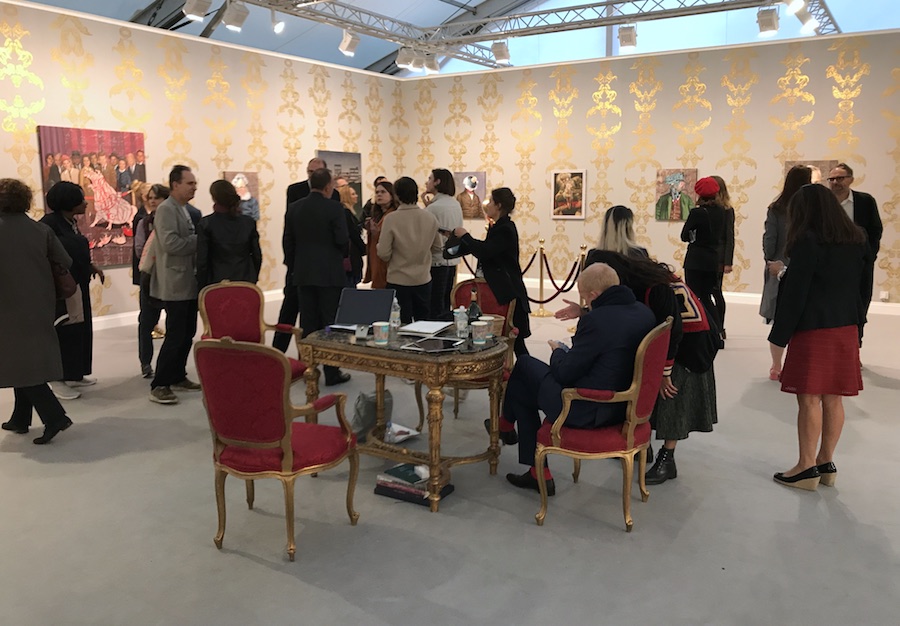 The Emerging galleries section is carpeted this year which sheds the separation between up and coming and the establishment. This is still the place to see and discover. The energy level remains high.

I don’t know, call me jaded. I’ve been to these affairs all over the world and some are inspiring and fun, some are places to look and discover, some are just too damn big and some are just pleasure domes for narcissists. Frieze has it all so it depending on your frame of mind and mine is exhausted do not miss this fair. – Paul Carter Robinson

One of the highpoints of London’s Autumn cultural calendar Frieze London and Frieze Masters is open to the public 4-7 October. The UK’s most influential art fair showing over 1000 artists from the world’s leading galleries, don’t miss the many performances, talks and film screenings taking place across both fairs.