The Health Secretary Matt Hancock has briefed the nation on COVID19 in front of a ‘Spin Art’ painting by YBA artist Damien Hirst. The painting chosen from the Government Art Collection is in-situ in the former Culture Secretary’s office. 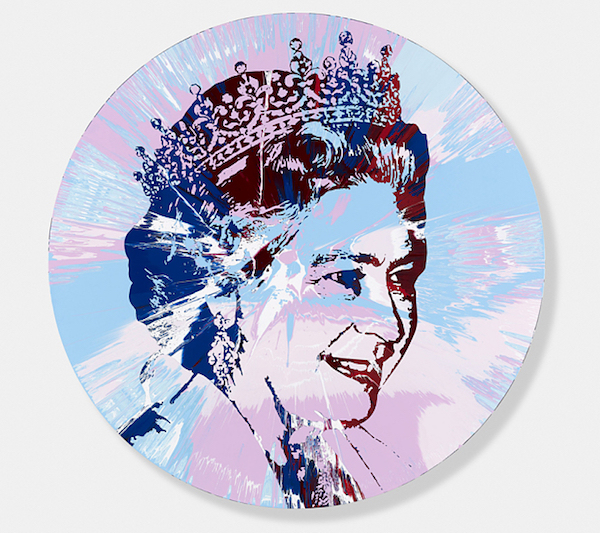 The painting was donated to the nation by the artist in 2014. The artwork, which is not a typical example of the Turner Prize winner’s work, depicts the Queen in a Street Art style. It went directly from the artist’s studio to the Government Art Collection (GAC) and has never been shown in public until now.

According to the report, Hirst donated the portrait to the collection on March 23, 2015, after officials approached his studio looking to purchase another work by the artist. The collection already owns one of Hirst’s dot paintings.

Hirst describes his “Spin” paintings, the psychedelic compositions that harken back to his youth in the 1960s, as “childish…in the positive sense of the word.” By the mid 1990s, spin paintings formed an integral part of his work and a spin machine in his Berlin studio allowed him to further play with the process. Since then, his spinning works have become as iconic as his meticulous “spot” paintings.

Damien Hirst (British, b. 1965) is a contemporary, conceptual artist, best known for his role in the Young British Artist (YBA) movement of the 1990s. Always revolving around themes of mortality and science, his artistic practice varies widely—from dead animals submerged in formaldehyde to pristine, ominous medicine cabinets to multi-colored paintings of butterflies and spots. He was awarded the prestigious Turner Prize in 1995, and has had over 80 solo exhibitions and 260 group exhibitions worldwide at the Gagosian Gallery, Serpentine Gallery, Tate Modern, and more. His work currently resides within the collections of the Tate and the Hirshhorn Museum.

For over 120 years, the Government Art Collection has championed British art, history and culture around the world. Find out how it all began and the many different ways the Collection is developed and maintained today.

Works of art from the Government Art Collection (GAC) are displayed in UK Government buildings in nearly every capital city, making it the most dispersed collection of British art in the world. The role of the Collection is to promote British art while contributing to cultural diplomacy. Dating from 1898, the Collection has expanded over the years and now contains over 13,500 works of art from the 16th century to the present day by mainly British artists in a broad range of media.  These maps show the locations where works are on display.

New works of art are purchased with the approval of an Advisory Committee. The collection mainly acquires works by artists who have a strong British connection: for example, those who were born in Britain, or who have lived or are living in the country. Works must be robust enough to withstand being displayed in a non-gallery environment – a Minister’s office or a working building such as an Embassy or Residence.

Matthew John David Hancock is a British politician serving as Secretary of State for Health and Social Care, since 2018. A member of the Conservative Party, he has been the Member of Parliament for West Suffolk since 2010. Hancock was born in Cheshire, where his family runs a software business.