Heather Phillipson (b.1978, London) will be the next artist to undertake the annual Tate Britain Commission. To be unveiled when the museum reopens, this major commission will be the latest response to the unique architecture and context of the neo-classical Duveen Galleries at the heart of Tate Britain.

Audacious and disconcerting, Heather Phillipson’s expansive multimedia projects include video, sculpture, installation, music, poetry and digital media. Described by the artist as ‘quantum thought-experiments, her works often carry a sense of latent threat – a feeling that received ideas, images, and the systems that underpin them may be on the verge of collapse.

Philipson’s commission for Tate Britain, entitled RUPTURE NO 1: blowtorching the bitten peach, will coincide with THE END, her 2020 commission for the Fourth Plinth in Trafalgar Square, on view until spring 2022. Her sculpture for the plinth, a ten-metre-tall dollop of whipped cream topped with a cherry, a fly and a drone that transmits a live feed of the surrounding area, is characteristic of Phillipson’s strange and striking works.

Heather Phillipson’s recent solo projects include VOLTA, an online audio collage for Art on the Underground to coincide with the launch of the Fourth Plinth (2020), a full-length audio broadcast for BBC Radio 3 (also 2020), and new multimedia installations for the Martin Gropius Bau, Berlin and Sharjah Biennial 14 (both 2019). In 2018 she produced a major solo show at BALTIC Centre for Contemporary Art, a vast installation at Gloucester Road Underground station for Art on the Underground, and a new online work for the Museum of Contemporary Art Chicago. Other recent shows include the Whitechapel Gallery, London (2016), 32nd Bienal de Sāo Paulo (2016), Schirn Kunsthalle Frankfurt (2015) and the 14th Istanbul Biennial (2015). Phillipson received the Film London Jarman Award in 2016, the European Film Award Selection at the International Film Festival Rotterdam in 2018, and is also an acclaimed poet.

Alex Farquharson, Director, Tate Britain, said: “Heather Phillipson is one of today’s most exciting British artists, and we’re thrilled to be working with her on this year’s Tate Britain Commission. She is renowned internationally for her unforgettable installations, which tackle pressing contemporary issues in singular and remarkable ways. Right now, it’s also vital to support and give a platform to artists such as Phillipson who are directly addressing the future of our planet.” 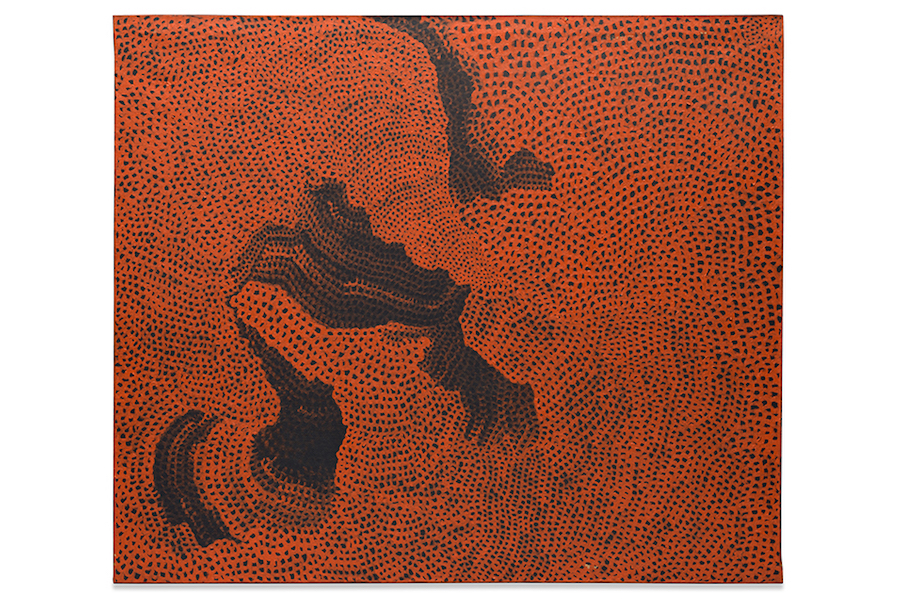 This is, without doubt, the rarest group of Kusama works from the late 1950s and 1960 to ever come to the auction.

Early Yayoi Kusama Works To Be Sold At Bonham’s NY

Early paintings and artworks by Yayoi Kusama, some never before exhibited in public, will go under the hammer in a special single-owner collection sale at Bonhams New York on Wednesday, 12 May.

The sale, Kusama: The Collection of the late Dr Teruo Hirose, comprises three paintings and eight works on paper, gifted by Kusuma herself to Dr Hirose, her lifelong friend and doctor whom she consulted in her early years in New York in the 1960s when she was a struggling young artist in need of medical aid.

The sale highlights include two of Kusama’s River paintings – Mississippi River and Hudson River – featuring early examples of her famous Infinity Net motif. Both were created in 1960 and offered each with an estimate of $3,000,000 – 5,000,000. These early works are exceptionally rare due to Kusama’s use of the colour red – almost all her other works of this period are white. The third painting in the collection, Untitled, is a very early example of Kusama combining vibrant colours and the scale of the work lends an immersive quality, something that foreshadows the artist’s later work, such as her Infinity Rooms.

The eight works on paper, executed by Kusama before she arrived in the United States in 1957, are cornerstones of the artist’s practice, laying the aesthetic groundwork for her career to follow. Painted when Kusama was in her twenties, the works show the genesis of her Infinity Nets, as well as elements such as polka dots and flower imagery for which she would become known.

Both Yayoi Kusama and Dr Teruo Hirose arrived in the US from Japan in the 1950s. Though the routes they took in life were very different – one was a trailblazing contemporary artist, the other a skilled medical surgeon and physician based in the Bronx (who was also part of the team pioneering open heart and bypass surgery). However, their paths crossed in New York in the 1960s, when Kusama visited Dr Hirose for medical treatment. Dr Hirose was one of two Japanese-speaking doctors in Manhattan in the 1960s, and he built a reputation within the community providing affordable medical care to Japanese patients after hours. He was especially generous to artists, often treating them pro bono. Kusama arrived in the US with little money but everything she felt she needed: 2,000 of her works on paper and 60 silk kimonos which she planned to use in lieu of currency. With one exception, all of the works on paper offered in the sale were part of the collection she brought with her from Japan – and which were given to Dr Hirose as gifts in recognition for his kindness in treating her. The pair would become lifelong friends.

Bonhams Post-War & Contemporary Specialist, Amy Thompson, commented: “This is an exceptional collection of rare early works by Yayoi Kusama. Not only do these works have an incredible provenance, but they are also extremely significant in Kusama’s oeuvre, expressing many early features and themes which she would continue to explore and develop throughout her career. The two River paintings are early examples of her famous Infinity Net motif, rare for this period in a striking and unusual red. Moreover, her Untitled painting demonstrates Kusama’s experimentation during the 1960s, while also foreshadowing her recognisable mirror boxes – where images grow and radiate from a single point.”

Writing in the Spring edition of Bonhams Magazine, Lucinda Bredin said: “Kusama traces the idea of the river back to her childhood where she would gaze at tiny pebbles “each individually verifiable” and yet part of a current that gradually gathers unstoppable force. But what is particular about these works – which have never been on public display since they were given to Dr Hirose – is that, unlike most of Kusama’s net paintings painted in ethereal white, these are an earthy, magnetic red. Because there is no fixed perspective, the works draw the eye in and gradually the dots that initially appear equal and part of a universe stretching to infinity take on their own singular presence. They at once embrace and surrounds themselves; they are tangible and yet on the brink of dissolving. It is as if the eye is an element that is being immersed and tumbled about in water.” 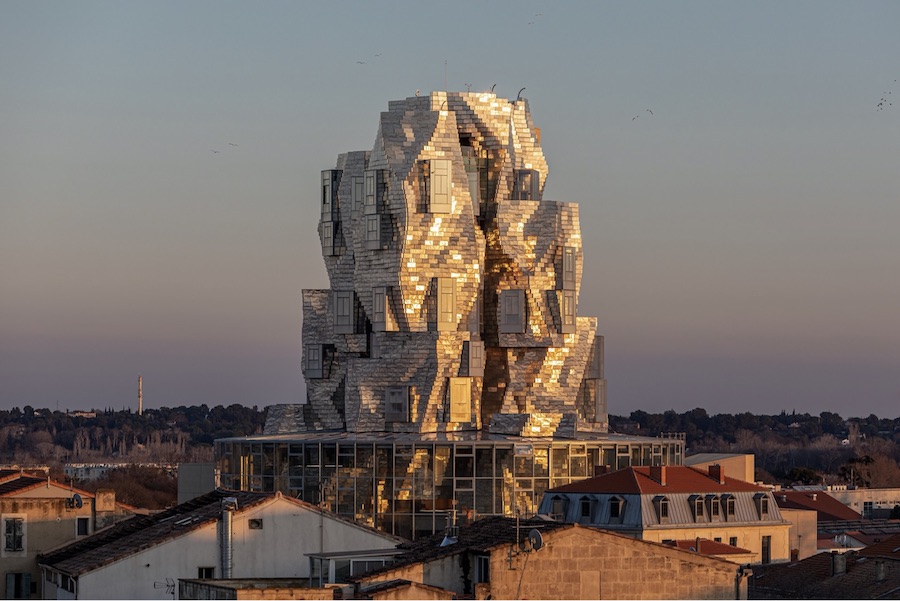 With its Spectacular new building by Architect Frank Gehry, the LUMA Foundation has announced an opening date for LUMA Arles’ on 26 June 2021. The 27-acre creative campus at the Parc des Ateliers in the city of Arles made famous by Vincent van Gogh; artists and innovators of the future will come together.

At its heart is Frank Gehry’s spectacular 15,000 square meters tower, a twisting geometric structure finished with 11,000 stainless steel panels. It will house exhibition galleries, project spaces and the LUMA’s research and archive facilities, alongside workshop and seminar rooms. The campus is also home to seven former railway factories, four of which have been renovated by Selldorf Architects as exhibition and performance spaces. The surrounding gardens and public park designed by the landscape architect Bas Smets.

The Arles project is Maja Hoffmann’s brainchild, who established the LUMA Foundation in 2004 as a leading international philanthropic organisation. The Foundation focuses on the direct relationships between Art, culture, environmental issues, human rights, education and research. It is dedicated to providing artists with opportunities to experiment with new work, in close collaboration with other artists from various disciplines, with curators and diverse audiences.

From 2008 to 2020, the development of this creative campus in Arles has been led by Maja Hoffmann, working with a small dedicated team, and the collective input from a Core Group of advisers (Tom Eccles, Liam Gillick, Hans Ulrich Obrist, Philippe Parreno, and Beatrix Ruf). LUMA has already commissioned and presented more than 100 artists and innovators at sites in Arles, including the ancient Roman amphitheatre and the LUMA Arles campus.

In July 2010, Maja Hoffmann, Founder and President of the LUMA Foundation, said:

“There is one driving-metaphor for LUMA at the Parc des Ateliers: that of a living organism. As such, the balance between form and function determines its viability. It is about composing a polyphonic score where everything is ordered, yet where everything is possible. Là où, toujours, quelque part quelque chose se passe.”

Alongside the construction and renovation works, the ongoing exhibitions and living archive programme,

The Library is on Fire, Offprint, Atelier LUMA and LUMA Days; the residencies and the first steps to define the LUMA Winterschool have been, over the past ten years, the continuation of this vision more relevant than ever in these times of planetary transition.

Describing his building, which will house seminar rooms, exhibition spaces, research facilities, an auditorium and a café, Frank Gehry said:

“We wanted to evoke the local, from Van Gogh’s ‘Starry Night’ to the soaring rock clusters you find in the region. Its central drum echoes the plan of the Roman amphitheatre.”

The city of Arles is located in the French region of Provence-Alpes-Côte d’Azur in the Mediterranean South of France, between two nature reserves, the Camargue wetlands and the mountain range of Les Alpilles. Arles became a UNESCO World Heritage Site in 1981, incorporating its Roman and Romanesque legacy, which includes the monumental Arles Amphitheatre, the Alyscamps and the antique theatre.