An outstanding painting by Claude Monet ‘Le Palais Ducal’ 1908 is at risk of going abroad unless a UK buyer can be found . The picture valued at more than £28 million is one of a number of the artist’s works depicting Venice. An export bar has been placed on the painting, which now seeks a UK buyer. Last week a similar bar was placed on a £10m Turner watercolour as high-value paintings queue up to be exported due to the low value of Sterling during Brexit uncertainties.

This is a rare and beautiful example of Monet’s Venetian studies, and I hope that the funds can be raised to keep this treasure in the UK – Arts Minister Rebecca Pow

Arts Minister Rebecca Pow has led a call to save the treasures for the nation by placing a temporary export bar in the hope that a UK buyer can be found to keep the work in the country.

The latest painting in question was completed following Monet’s 1908 visit to Italy with his second wife, Alice. The work shows a sun-lit Doge’s Palace in Venice and its reflection in the water. 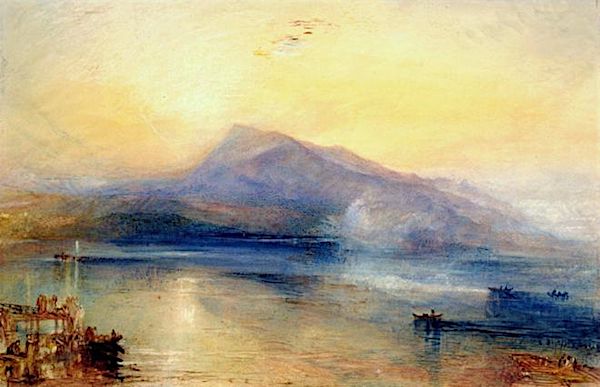 The Dark Rigi, the Lake of Lucerne by JMW Turner Export Bar instated

Monet visited Venice as a respite from working on his famous water lily series, and during the holiday he began to paint. The artist had anticipated a return to the city; however, Alice’s failing health hindered the couple from returning to Venice in 1909.

This meant that the Venetian series has a smaller number of completed canvasses and the images have a more extensive range of motifs compared to Monet’s other series of works. The artist worked on this particular canvas in situ during the 1908 visit, but it is thought that the work was completed at his home in Giverny during 1911-1912.

Monet’s inability to return to Venice and paint a complete series, combined with the phenomenal success of the water lily paintings, has led to the Venetian paintings remaining relatively overlooked.

Arts Minister Rebecca Pow said; “Monet is one of the world’s most famous and celebrated artists and his works still resonate more than 100 years on. With his trademark ingenuity, he managed to capture the changing ways people viewed nature and the world around them at the turn of the century.”

Born in Paris in 1840, Oscar-Claude Monet (1840 – 1926) was a prolific French painter and a principal founder of the Impressionist movement. Monet was introduced to painting from nature by Eugène Boudin and went on to become one of the foremost artists of the late nineteenth and early twentieth century.

The term ‘Impressionism’ comes from the title of Monet’s work ‘Impression, Soleil Levant’ which was first exhibited in 1874. Monet’s style of painting focused on capturing the same scene many times over with changing levels of light and the seasons.

The Minister’s decision to place an export bar on this outstanding painting by Monet will hopefully avert the risk of the artwork going abroad. Unless a UK buyer can be found , the picture valued at more than £28 million and one of a few of the artist’s major works depicting Venice will leave our shores. follows the advice of the Reviewing Committee on the Export of Works of Art and Objects of Cultural Interest (RCEWA). The committee noted that the work was a beautiful painting from a vital period in the career of one of the foremost artists of the late nineteenth and early twentieth century. They also noted that examples of the artist’s post-1900 travelling works are rare in UK public collections.

The RCEWA made its recommendation on the grounds of the painting’s outstanding aesthetic importance and its interest in the study of Monet’s Venetian series.

Sotheby’s said; “Claude Monet arrived in Venice on 1 October 1908 – and, taken aback by the splendour of what he saw, the artist declared the city ‘too beautiful to paint’. Enchanted by the city, Monet painted just under forty canvases during the course of his three month stay, the greater part of which adorn the walls of museums across the globe. This spectacular painting depicts the historic Gothic façade of the Doge’s palace, and it belongs to a celebrated group of three works painted from the vantage of a boat moored along the canal, one of which is held in the collection of the Brooklyn Museum in New York.”

The Reviewing Committee on the Export of Works of Art and Objects of Cultural Interest is an independent body, serviced by The Arts Council, which advises the Secretary of State for Digital, Culture, Media and Sport on whether a cultural object, intended for export, is of national importance under specified criteria.

The Arts Council champions develop and invest in artistic and cultural experiences that enrich people’s lives. It supports a range of activities across the arts, museums and libraries – from theatre to digital art, reading to dance, music to literature, and crafts to collections. www.artscouncil.org.