I met Howard Hodgkin in New York at the opening of his first US solo show at the Jill Kornblee Gallery, when I had just turned 18. As a first-year Fine Art student at the Boston Museum School, I had travelled down to NY with Stuart Cary Welch a Professor at Harvard, who by special arrangement with the Museum School and Tufts allowed me to take his course in Indian and Islamic Art. Cary was the father of a friend, of a friend, and I was the same age as his daughter Adrienne or (Little Edith as she was known to her parents).

Cary arranged accommodation for me with James Ivory the Film Director.  I recall his apartment on the upper west side stuffed with Indian paintings, cultivating that faux English look that Ralph Lauren does so well. We then made our way to the notorious Doris Weiner Gallery on Madison Ave to look at a superb Afghani bronze, which Welch later purchased for $75,000, a vast sum at the time. At around 5:00 pm we met up with Howard and some friends for a drink in an ‘authentic’ English Pub, which must be long gone now. In hindsight, it was a remarkable line-up of characters that included James Ivory, Bruce Chatwin the writer (who was married to Cary’s wife Edith’s cousin Elizabeth) Louis Grant, a teacher at St Paul’s Academy, Toby Falk who worked at Sotheby’s, Cary and myself. I have never lacked confidence meeting new people and all of the above were on their way to achieving stellar marks in their various practices including of course Howard.

Howard told the art critic Edward Lucie-Smith in 1981, “The reaction (to my first NY show) was such that I felt I was communicating with an audience. I’ve rarely felt that in England.”

The Kornblee Gallery was at 58 East 79th Street. Unlike contemporary art galleries today, it was not a vast white space but the ground and lower ground floor of a once grand townhouse. The most striking thing about the show, which contained only 9 paintings, was the compact scale of the works. Hodgkin had a lot to say in the smallest confines of space. I remember speaking to Jill Kornblee about the work at the time and she was struck by how much Howard could express in a painting approx. 15cm wide. New York was used to seeing vast canvases, the popular norm in 1973. This was an original approach most likely influenced by Howard’s interest in Indian miniatures. The show was a sellout.

I only stuck the Boston Museum school for a year and planned a trip to India with my then girlfriend Sherard Russell bizarrely the daughter of a four-star general in the Air Force. It was at this point that Cary Welch came to the rescue and offered to pay for my trip with the help of a grant he received from the Rockefeller Foundation. My job for the next three months was as a photographic assistant mainly driving around to faded palaces and photographing what was left of their post-Raj Royal art collections. It was a fascinating insight into the lavish lifestyles that the Maharajas must have lived. Cary knew everybody and we were even invited to tea by the Raj Mata of Jaipur who showed us many things that were out of reach to the public and government. 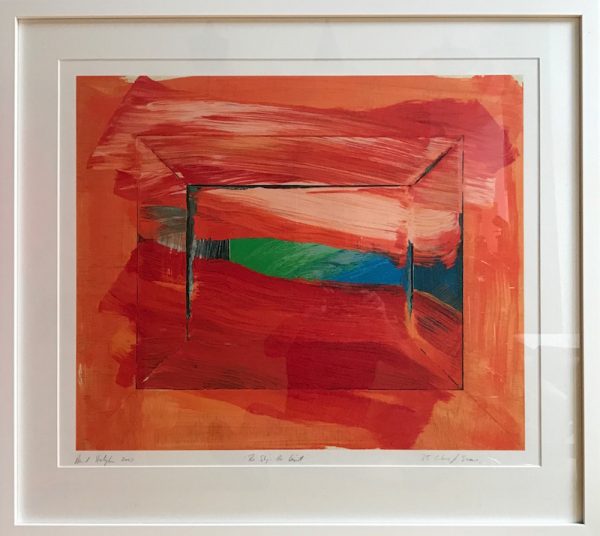 Howard Hodgkin The Sky’s The Limit 2003

About a month into my trip, we were joined by Howard and flew from Delhi to Mysore, travelling by car to Hydrabad. We were crammed into a Hindustan Ambassador taxi which had no suspension and the roads and driving in India made it one of the most uncomfortable, hair-raising experiences of my life. Howard was very moody but you could see he was taking in everything from the temples and palaces that we visited to the various palettes of colours that burst from every corner of your sightline. Even though I was an aspiring painter Howard did not want to talk about Contemporary Art, he was far more interested in the visual languages that chaotically occurred in the villages and cities that we were passing through. I do remember stopping off to see textiles drying in the sun with masses of clay pots of rich dye. We stopped the car and Howard photographed them. Howard didn’t have a sketchbook or if he did I never saw him make drawings. He did have a camera and photographed many of the places visited. I recall a conversation that I had with Cary during the journey, he described Howard as, “so uptight that he was like water being wrung out of a washcloth”. He was someone that was about to explode. Howard was unable to express what he was feeling in a conventional way. This is perhaps what made him such a good painter. Cary and Howard had a volatile relationship for many years. The unspoken was that Howard was in love with Cary and this was not reciprocated. Howard was jealous of Cary’s natural ability to engage with others and make them feel comfortable, where Howard lacked many of the social graces typical of his background.  By the end of our road trip, Howard was barely speaking to me. He became insanely jealous of the time I was spending with Cary and chose to ride in the front of the car. The trip ended in Bombay as it was called then. Cary’s wife Edith and Howard’s wife Julia were waiting for us at the Taj Mahal Hotel – we dined separately. Julia and I went to visit the Elephanta Caves as everyone else had been many times before. I remember her as a very strong and sturdy woman. I think she had put up with a lot in her relationship with Howard, who was difficult, to say the least.

I ran into Julia many years after she divorced Howard. She ran a florist stand that was between Habitat and Heal’s on Tottenham Court Rd. I introduced myself and asked if she remembered me, she returned a one-word answer … Yes. She then ignored my presence until I left. Howard was sick for many years. Cary thought he was going to die. I thought it may be AIDS as it was the late 1980s, but it turned out to be something less sinister. Cary was on and off speaking terms with Howard. It was difficult to gauge whether to ask about him, so I stopped. Cary would write long letters to me mentioning Howard. Some of the content had to do with Howard’s bidding him up at auction, Cary was often furious that Howard had decided to bid on the same lot that he had come to London to bid on. Cary grew paranoid, he told me not to mention to anyone which lots he was interested in as if I were still in touch with Howard. It was a bitter rivalry.

I visited Howard’s Museum Street flat when Cary was staying there but Howard was away. The walls were covered with beautiful fragments of Mogul carpets and Indian paintings but no sign of work by H.H. Cary who was a talented artist himself hated Howard’s work. Howard had given him a small painting that resided in his New Hampshire residence. I asked about it in the 1990s and Cary told me he had loaned it to Harvard’s Fogg Art Museum . Years later I saw it hanging there.