Hugh Mendes has created his most controversial image to date, for a group show at CHARLIE SMITH LONDON. Mendes is known internationally for his realistic depictions, inspired by Obituaries which appear in the Guardian/Observer Newspapers.

“My depiction of President Trump is in the style that I am known for and that is recreating obituaries out of the newspaper. This is the first I have painted of a living subject, in many years. Maybe it’s just a statement that Trump is ‘a sitting duck President’.” Whatever the sentiment, the painting has pre-sold to a German collector, for an undisclosed figure.

“Newspapers create ‘advance obituaries’ so why shouldn’t an artist do the same”, he explained adding; “This cathartic work of art reminded me of a quote used in the film ‘Field of Dreams’, “If you build it (a ballpark) people will come. So I thought, maybe if I painted this subject Trump would just go away!”; The artist stated in an exclusive chat with Artlyst.

For their first exhibition of the year, CHARLIE SMITH LONDON presents a unique opportunity to view the gallery artists and key collaborators in context. 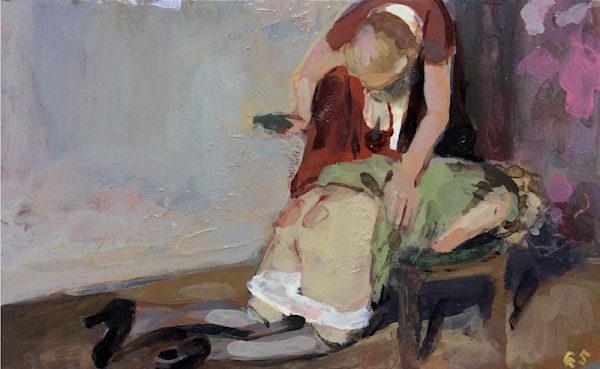 Gallery Director Zavier Ellis states: “In some ways, gallery artists show is a pretty dull and unimaginative thing to do. But, on the upside, it enables our audience to digest our stable in context. We are mostly a painter’s gallery, albeit with a curatorial emphasis that embraces every medium when appropriate. The artists we exhibit are technical, but this is nowhere near enough in itself. You will find that each one of them makes work with an intensely emotional, philosophical or psychological charge, and so their work operates in a challenging, profound way.

These artists are lateral thinkers who know that the trajectory of history is not as linear as is often presented and that everything operates in a complex, non-hierarchical, interconnected way. Embracing doctrines and tendencies from the modern and postmodern periods, as well as near and deep history, they conduct their investigations without irony or sentimentality, but rather with positive affirmation, intelligence and deliberation.

Added to the gallery artists in this show, we have invited others with whom we collaborate regularly, who work in paint, pencil, charcoal and installation. So in fact, a potentially dull and unimaginative idea becomes an intriguing and engaging proposition. This is not for everyone, but those that get it will be rewarded for their conviction.”

Hugh Mendes has been painting images of newspaper clippings for about ten years now. They came to prominence in my work following 9/11, the day of my MA graduation, when I showed a painting of Osama Bin Laden pointing a gun at a triumphant George Bush. It had been painted about a month previously in response to his contested election victory. The use of newspaper clippings provides a very flat spatial field, recalls certain trompe l’oile 17th century still life and can deal directly with contemporary issues such as cloning and terrorism. These are contemporary manifestations of the timeless themes of birth and death. Recently I have been working on an ongoing, and never-ending, series of obituaries. Obituaries condense a life into a few column inches and a single image – a scrap of newsprint that becomes a heavy token, a memento, even an icon when rendered in paint.

The act of painting and therefore sustained concentration brings a degree of focus and depth to what otherwise would be fleeting moments in the press.