The Performance Artist Marina Abramović has made a statement to the people of Italy in association with Palazzo Strozzi as part of project IN TOUCH. The international artist joined Ai Weiwei and Tomás Saraceno in sending a message of solidarity and encouragement emphasising how Italians are demonstrating “great courage and a great feeling of community and humanity” and that the COVID-19 crisis represents an emergency now global that must serve us as an opportunity to rethink our relationship with the planet: “human consciousness must change, our approach to the world and the planet must change”.

This is my message to Italy and to the people of Italy, which I love deeply – MA

I know this is a moment of crisis, and the virus is everywhere, but at the same time from the disasters, we have to learn a lesson. And the Italian people are showing great courage, great feeling for community and humanity. We are going to fight this together. It is something going to pass but what is really left is a very valuable experience that human consciousness should change, our approach to our world and our planet should change. This is the lesson that we have to learn. Italy, I love you. And my heart is with you. 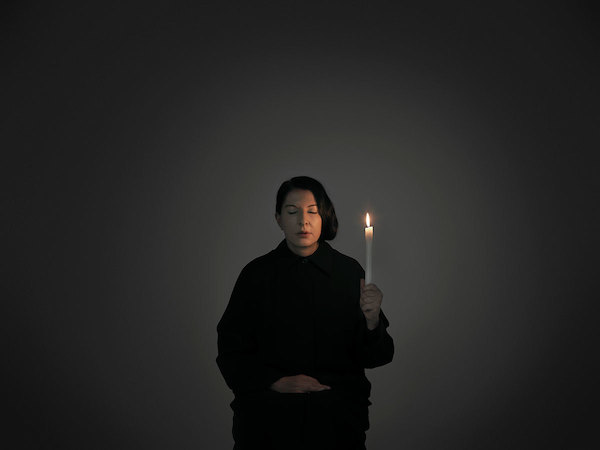 Italy I Love You My Heart Is With You – Marina Abramović

Since the beginning of her career in Belgrade during the early 1970s, Marina Abramović has pioneered performance art, creating some of the form’s most important early works. The body has always been both her subject and medium. Exploring her physical and mental limits, she has withstood pain, exhaustion, and danger in her quest for emotional and spiritual transformation.

Abramović was awarded the Golden Lion for Best Artist at the 1997 Venice Biennale. In 2008, she was decorated with the Austrian Commander Cross for her contribution to art history. In 2010, Abramović had her first major U.S. retrospective and simultaneously performed for over 700 hours in The Artist is Present at the Museum of Modern Art in New York. In 2014, she completed the three-month performance 512 Hours at the Serpentine Gallery in London. Abramović founded Marina Abramović Institute (MAI), a platform for unnecessary and long-durational work, to create new possibilities for collaboration among thinkers of all fields. The institute inhabited its most complete form to date in 2016 in partnership with NEON in As One, Benaki Museum, Athens.

Her most recent publication is Walk Through Walls: A Memoir, Published by Crown Archetype in October 2016, and it has subsequently been translated into 19 languages internationally. Her retrospective, The Cleaner, opened at Moderna Museet, Stockholm in February 2017 and had toured to the Louisiana Museum of Modern Art in Denmark, Henie Onstad Kunstsenter in Oslo, Bundeskunsthalle in Bonn, and Palazzo Strozzi in Florence. The exhibition will continue on to Centre for Contemporary Art Znaki Czasu, Toruń, and Museum of Contemporary Art, Belgrade in 2019.

Abramović has a new show scheduled to open at the Royal Academy in September the RA is optimistic that it will go ahead.

In Abramović’s first major exhibition in the UK, the RA bring together works spanning her 50-year career, along with new works conceived especially for these galleries. As Abramović approaches her mid-70s, her new work reflects on changes to the artist’s body, and explores her perception of the transition between life and death.

Audiences will be able to engage with the ongoing debate that Abramović explores throughout the exhibition: can performance art outlive the moment of performance? ​Abramović examines the question of legacy through photographs, videos, installations and re-performances by younger performers.

Curated in close collaboration with Abramović, this exhibition will offer visitors the sort of intense, physical encounter for which she has become known. Abramović will participate in the programme of talks and events surrounding the exhibition