The ownership of a period portrait of Jackie Kennedy Onassis, in the possession of an East Hampton, NY art dealer is being challenged in court by the estate of the former First Lady’s cousin, Edith Beale.

The executor of the estate, Bouvier Beale Jr, the nephew of Ms Beale has stated that the oil painting was stolen from the infamous Grey Gardens estate. Terry Wallace, the art dealer/proprietor of Wallace Gallery, has told a local newspaper that the work of art was not stolen and that he will “show its provenance, or record of ownership when he mounts his defence in court”.

The painting is of particular historic value as it is one of the only portraits painted from life of this iconic figure in private hands.

A U.S. District Court lawsuit was filed on Thursday, February 8, by Bouvier Beale Jr. He was Ms Beale’s estate executor, as well as the first cousin, once removed, of Ms Kennedy Onassis. The portrait was painted by Irwin Hoffman in 1950. When Ms Kennedy Onassis, was 19, three years before she married John F. Kennedy, the tragically assassinated President of the United States. 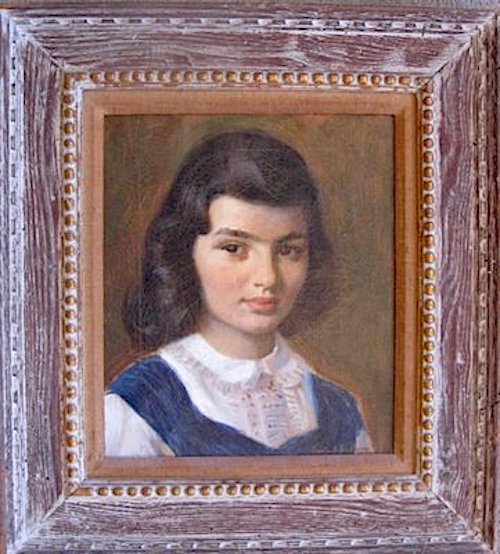 Onassis’s father, John Vernou “Black Jack” Bouvier III, commissioned the painting and gave it to his sister Edith “Big Edie” Ewing Bouvier Beale before his death. The painting was in-situ at Grey Gardens, the centrepiece of the 1975 American documentary film by Albert and David Maysles. The film depicts the everyday lives of two reclusive, American aristocrats, a mother and daughter both named Edith Beale, who lived in poverty at Grey Gardens, a derelict mansion at 3 West End Road in the wealthy Georgica Pond neighbourhood of East Hampton, New York.

The painting was in the tumbling down mansion until the late 1960s, when it suddenly disappeared. The lawsuit states when Big Edie died in 1977, the ownership of the portrait would have passed to Little Edie, who died in 2002, but it couldn’t be found.

The lawsuit also mentions a September 1998 article in Hamptons magazine, in which Mr Wallace told a writer that he purchased the painting from an unnamed dealer who had possessed it since the mid-1970s.

Mr. Wallace said. “I can only tell you a few things,” “First, I bought the painting in the late ’80s. Second, I’ve been in the same location in East Hampton for 25 years. 1

The lawsuit states that Mr Beale’s wife, Eva Beale, visited the Wallace Gallery in 2004 and saw the painting, and in 2016 while archiving Little Edie’s personal records she came across a copy of the Hamptons magazine article and realised that it referenced a painting that Little Edie had said was stolen during a burglary, according to the court filing. Mr Wallace refused requests to divulge the provenance of the painting, but he told the family that it was “impeccable” and “confidential,” the filing states. 2

For decades, Grey Gardens belonged to Sally Quinn, the journalist, and Ben Bradlee, the longtime executive editor of The Washington Post who died in 2014 (Bradley was played by Tom Hanks in the Oscar nominated film,The Post)

The summons filed by the estate’s lawyers on February 8 states that Mr Wallace has 21 days to respond, or face a default judgment.