The long-awaited court appeal case between Jeff Koons and the photographer Frank Davidovici over copyright infringement concerning a sculpture appropriated from a 1970s ad campaign has ruled in favour of the plaintiff for a second time.

The work (Koons’s 1988 sculpture Fait d’hiver, from his “Banality series) was removed from a major Pompidou Centre exhibition. It depicts a woman lying in the snow with a pig, almost exactly replicating a Naf Naf advert that Mr Davidovici created.

Davidovici was alerted to the 2014 exhibition catalogue, which travelled from the Whitney Museum in New York then to the Centre Pompidou in Paris.

Sotheby’s said the sale price was a record for the Dutch artist in France, where Thursday’s auction took place.

It had previously estimated A Street Scene In Montmartre could fetch up to eight million euros (£6.9m).

A rarely seen Van Gogh painting depicting a Street Scene In Montmartre has gone on view for the first time after being hidden away for more than 100 years.

The painting owned by a single French family since it was painted in 1887 has consigned the artwork to Sotheby’s, where it is expected to realise £7m when it goes under the hammer next month.

The painting is a transitional work between Van Gogh’s darker canvases like the ‘Potato Eaters’ painted in Holland, which utilises earthy colours and the vividly coloured pictures executed in the South Of France. During this period in Paris, Van Gogh was exposed to Impressionism and the painting reflects this breakthrough.

The picture will be exhibited in Amsterdam, Hong Kong, and Paris before the sale on 25th March in Paris at Mirabaud Mercier, a Paris auction house jointly associated with Sotheby’s. 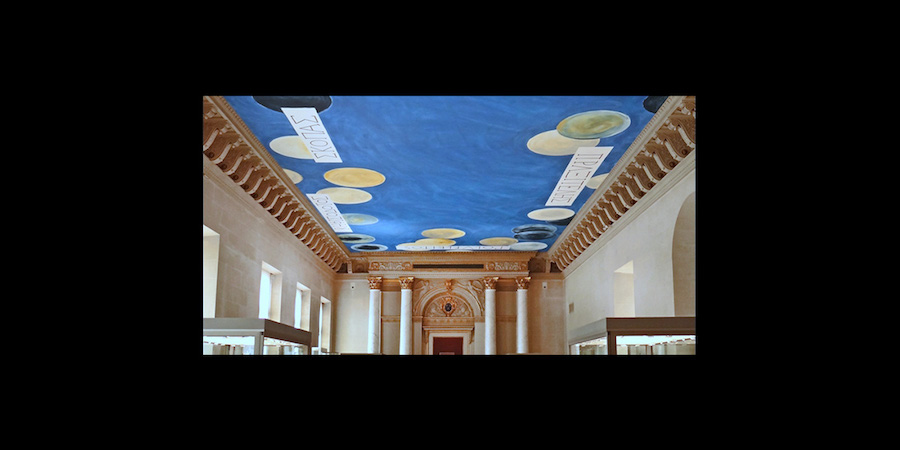 The Cy Twombly foundation is furious with the Louvre for redecorating a room that houses a site-specific ceiling painted by the artist created towards the end of his life in 2010. The Foundation is now in the process of threatening legal action.

The museum has recently renovated the room, replacing the marble floor with wood parquet, painting the walls a dark red, which clashes with the ceiling’s blue hues. A black dado around the perimeter has also been added.

The tones of the mural were developed in response to the “character and light of the room as well as to the content,” Sir Nicholas Serota, the former director of the Tate and a current member of the Twombly Foundation board, told the Telegraph last week. “For Twombly,” he said, “the room was a whole.” “If this is not an ‘affront’ to one of the great painters of the twentieth century, I don’t know what would be.”