Franck Davidovici, the creative director of the clothing brand Naf Naf who is embroiled in a long-running dispute with the artist Jeff Koons has had his day in a Paris court. The artwork Fait d’Hiver was purchased by the Prada Foundation for $4.3m in 2007 at Christie’s New York.

The legal spat broke out in 2014 when Koons was accused of plagiarising a high profile advertising campaign by the French clothing brand. Jean Aittouares, Davidovici’s lawyer, stated Koons’s 1988 porcelain sculpture, Fait d’Hiver, is a “slavish copy” of an advert created by Naf Naf r in 1985. The black and white photo features a trendy model lying in the snow attended to by a pig with a barrel of rum tied around its neck like a St Bernard rescue dog. 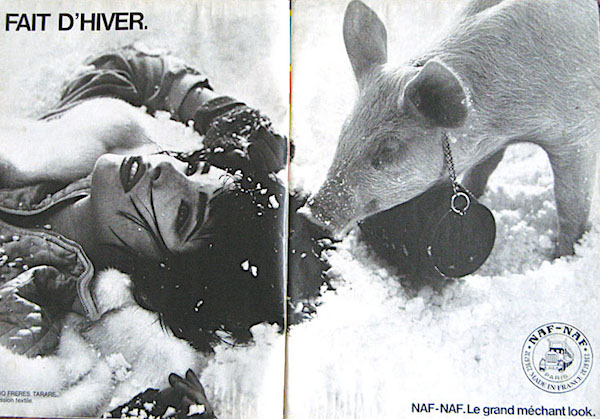 Alain Seban, Centre Pompidou director came to Koons’s defence when the allegations emerged, explaining that appropriation was a common artistic strategy. However, Davidovici’s lawyer isn’t convinced. In an open letter, he writes, “Legally, appropriation as you understand it is nothing other than counterfeiting. As such, it undermines the author of the original artwork’s fundamental rights, in the same way, theft undermines the owner of the stolen good’s fundamental rights.” He adds that it is “unimaginable” that Seban and the institution he represents would support Koons’s actions.

This is one of several cases where the Post Pop artist has been singled out for copyright infringement related to works.  On 17  December 2014, Mr. Koons was under public scrutiny for plagiarising another 1985 advertisement used for promoting the French Clothing brand Naf Naf. The Frenchman, Franck Davidovici, who is credited for creating the original ad claimed in letters that Mr. Koons’s 1988 sculpture Fait d’Hiver is derived from his work. Lawyers for Davidovici stated that his client would be “pursuing legal action against the artist”.

Fait d’Hiver was removed from the Koons retrospective at the Pompidou, according to a Pompidou spokesperson. The owner of the sculpture had requested the piece be returned before the end of the show’s run in Paris. Koons has been charged with plagiarism from this particular series, which is based on a number of kitsch images from the 1980s. String of Puppies (1988) and Wild Boy and Puppy (1988) are the other sculptures in question.

The €300,000 copyright infringement case is likely to be resolved next month.