John Anthony Baldessari (June 17, 1931 – January 5, 2020) has died aged 88. He was an American conceptual artist best known for his work featuring found photography and appropriated images. Baldessari lived and worked in Santa Monica and Venice, California. Baldessari was one of many artists during the 1960s who helped challenge the progression of art history by making use of photography and text. 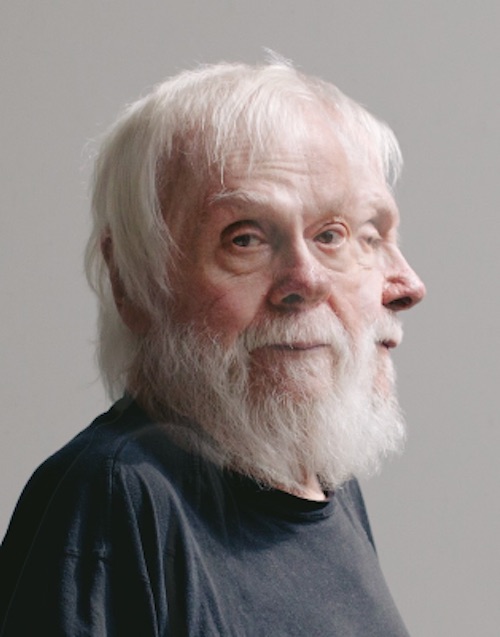 Initially a painter, Baldessari began to incorporate texts and photography into his canvases in the mid-1960s. In 1970 he began working in printmaking, film, video, installation, sculpture and photography. He has created thousands of works that demonstrate and, in many cases, combine the narrative potential of images and the associative power of language within the boundaries of the work of art.

He proceeded to engage in post-graduate work at Chouinard Art Institute and the University of California, Los Angeles (UCLA). Baldessari taught at the California Institute of the Arts in Valencia, CA from 1970-1988 and UCLA 1996-2007.

In the summer of 1970, all paintings in the artist’s possession dating from the thirteen years 1953–66 were incinerated at a local crematorium. He took the precaution of making slides of most of them but the exact number of works destroyed is unknown.

Baldessari conceived of the destruction of his early works as an artwork in itself called Cremation Project and in a letter to a critic shortly afterward he wrote, ‘I really think it is my best piece to date’.

Baldessari’s earliest major works, made in the 1960s, were canvases of statements culled from contemporary art theory, painted by sign painters so as to remove all traces of the artist’s hand. In 1970 he publicly renounced painting, marking a new stage of his studio practice through the photographically documented performance Cremation Project (1970), in which he burned nearly all the paintings he had made between 1953 and 1966. He then continued to produce photo-based works that used arbitrary, found constraints as their underlying structure. For example, for his California Map Project (1969), Baldessari observed where the letters of the word “California” fell geographically on a state map: he then created physical forms that resembled each letter near that geographic location, and photographed each form, arranging the images to again spell “California.”

A similarly conceived work is the iconic Wrong (1966–68), a combination of photographs and text constructed around the violation of a set of basic “rules” on snapshot composition from an amateur photography book. In Baldessari’s recreation of the mistakes of photographic amateurs (e.g., a photograph of Baldessari standing in front of a tree, so that it appears to grow out of his head), he both appropriates a system of art-making and ironically explores the authority behind artistic production—themes that resonate throughout his later work.

With the advent of the commercial portable video camera in the early 1970s, Baldessari began to experiment with the medium, continuing to explore issues of authority, temporality, and irony. In I Will Not Make Any More Boring Art (1971) he repeatedly writes the title statement for 13 minutes. Introduction the 1980s, he also began to use the medium of the film still to further explore similar issues of disjunction, creating highly suggestive and inconclusive juxtapositions such as Kiss/Panic (1984), which combines images of hands holding guns with an extreme close-up of a kiss. In recent years, Baldessari has overpainted appropriated images with brightly colored areas of acrylic, isolating elements of imagery to complicate the relationship of parts to the whole.

Baldessari’s artwork has been featured in more than 300 solo exhibitions and in over 1000 group exhibitions in the U.S. and Europe. His projects included unique works, prints, artist books, videos, films, billboards and public works. His awards and honors included the 2014 National Medal of Arts Award, an award from the International Print Center New York in 2016, memberships in the American Academy of Arts and Letters and in the American Academy of Arts and Sciences, the Americans for the Arts Lifetime Achievement Award, the Rolex Mentor and Protégé Arts Initiative, the Golden Lion for Lifetime Achievement, awarded by La Biennale di Venezia, the City of Goslar Kaiserring in 2012, and the BACA International 2008. He has received honorary degrees from the National University of Ireland, San Diego State University and Otis Art Institute of Parsons School of Design. He currently lives and works in Venice, California.

Recently Museo Jumex held a retrospective titled “Learning to Read with John Baldessari,” in Mexico City, 2017. Editions have been showcased at Gemini G.E.L. and Mixografia in Los Angeles, CA 2017-2019, and the Laguna Museum of Art in 2019. Mai 36 showcased a series of unique works titled “Windmills” in Zurich, Switzerland 2018. Marian Goodman exhibited a series of unique works titled “Hot & Cold Series,” in New York 2019.