Judy Blame the artist, designer and style icon credited with changing the face of London culture in the 1980s and 90s has died age 58. Blame had a retrospective at the ICA covering both his work as an artist and stylist in 2016.

“He was an artist, a genuine one, someone who could cherry pick cultural detritus and then mix it all together” -Dylan Jones

Born Chris Barnes in 1958 or 1960 (as it was never a question one never asked) in Leatherhead, Surrey, Blame grew up in Spain and Devon. He ran away to London aged 17 but decided to spend the next two years in Manchester.

While active on the club scene, returning to London, Barnes changed his name to Judy Blame; “Judy” was a nickname given to him by the fashion designer Antony Price, and the surname “Blame” was suggested by Scarlett Cannon, a hairdresser friend. Blame said he deliberately assumed a female name to confuse people. When asked his birth name, Blame refused to answer. Along with Scarlett, Blame ran a club-night called “Cha-Cha” at the London nightclub Heaven. 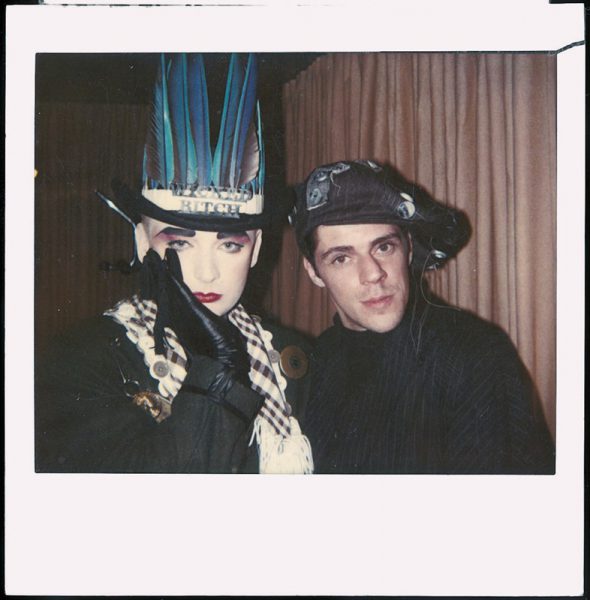 Along with Boy George, Leigh Bowery and (the so named after the club) ‘Blitz Kids,’ Blame helped style and cultivate the defining look of the end of the 20th century. Blame’s punk aesthetic as a stylist and image-maker influenced magazines such as The Face and i-D throughout the 1980s and 1990s. During the mid-1980s, along with designers John Moore and Christopher Nemeth, Blame was part of a collective called “The House of Beauty and Culture”.

Blame’s creations, often on a large scale, deployed a wide range of scrap metal and found objects to create statement pieces. During the 1980s he worked closely with the stylist Ray Petri, who was a significant figure on the London club scene of the 1980s and also collaborated with Leigh Bowery. Blame designs were worn by Duran Duran and The Transmitters. Blame also worked as a stylist for Neneh Cherry, Boy George, Björk and Kylie Minogue. Blame’s work first made an impact in U.K. clubs early in the 1980s, most notably the practice he dubbed “mudlarking,” which involved found objects fished out of the Thames  and repurposed as jewelry.

Among the designers Blame collaborated with were John Galliano, Richard Nicoll, Christopher Shannon and Louis Vuitton. For Rei Kawakubo at Comme des Garçons Blame designed a male accessories line. In 2005, he was selling his work through Kawakubo’s Dover Street Market, and also provided designs for Gareth Pugh.

Judy Blame died on 19 February 2018, Dylan Jones, editor-in-chief of GQ, wrote: “He was an artist, a genuine one, someone who could cherry pick cultural detritus and then mix it all together to create something new, something lasting.”

The life and work of this influential Artist, designer, art director and fashion stylist was celebrated at the ICA London in 2016. It featured Blame’s work since the 1980s; the ICA staged Artistic Differences in the Upper Gallery. This group exhibition aimed to present Blame’s work within a wider artistic context, drawing on connections in the art and design worlds in the UK from the 1980s and 1990s. Artistic Differences brought together artists and designers that had been directly linked to Blame throughout his career and those who had been influenced by his work and shared his distinct artistic approach and style. Participants included Charles Atlas, Dave Baby, Jake & Dinos Chapman, Malcolm Garrett, Derek Jarman, Jim Lambie, Mark Lebon, Linder, John Maybury, Peter Saville, Juergen Teller, Trojan, Nicola Tyson and Tim Noble & Sue Webster and others.

Charles Atlas’ film Hail the New Puritan (1987) evoked a particular moment in British cultural history associated with Blame and his work during 1980s London, it also provided context to contributions by other artists and designers of that time such as Dave Baby, Mark Lebon, Linder, John Maybury and Trojan. The work of graphic designers Malcolm Garrett and Peter Saville, as well as artist Linder, also provided a reference to the time Blame spent in Manchester during the emerging music scene of the late 1970s and 1980s.