Keith Haring’s (1958-1990) ‘Velum’ painted by the NY street artist in 1986 as a centrepiece for his solo show at the Dutch museum has been reinstalled and is on display again at the Stedelijk Museum.

The American artist painted the canvas, which filters daylight into the grand hallway as a site specific installation. Haring didn’t simply want to present artwork he’d already made – he insisted on making new work. Laying out the velum (which measures almost 40 x 66 feet, 12 x 20 meter) on the floor of one of the museum galleries, he painted it in just one day, using spray paint. Haring turned the event into an energy-fueled performance: while photographers and journalists looked on, he painted rapidly and rhythmically, moving over the canvas, hip-hop playing in the background. He filled the canvas with dancing, waving figures, crawling babies and squirming animals. Known as the ‘Keith Haring velum’, the painting was stretched below the monumental glass cupola above the historic staircase. The painting was an instant hit. Now, more than thirty years later and restored, the velum is back for everyone to enjoy. 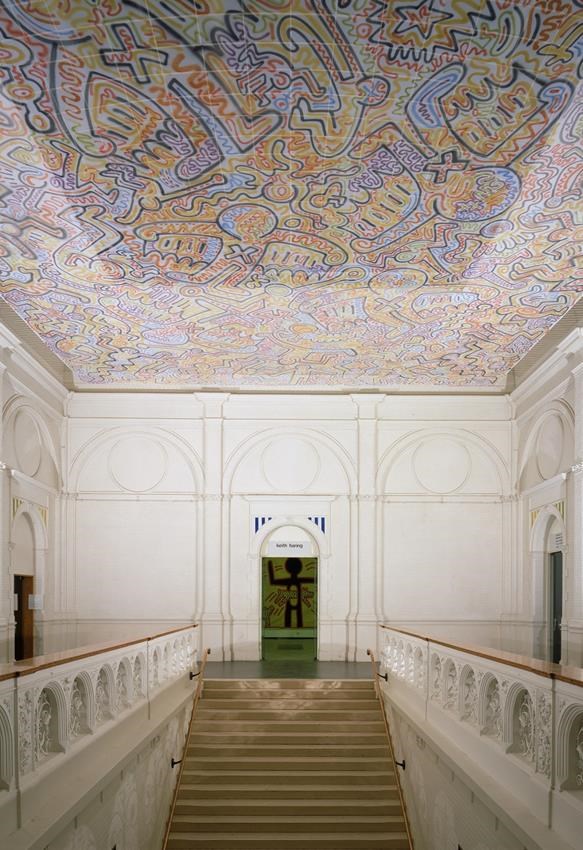 Incredibly, during this period, Haring also took part in activities outside the museum, in the city of Amsterdam. With the city as his canvas, he joined young graffiti artists and produced artworks, including a mural on the facade of the former Stedelijk storage depot on the Jan van Galenstraat, painted while working from a crane. This is Haring’s largest surviving public artwork in Europe and consists of a single thick, white line. “A kind of happy dinosaur with an elongated neck, like a CoBrA-style mythological creature. And astride the creature is a figure, its head encircled by a halo of rays. As if it’s been taken by surprise,” says Amsterdam artist Jan Rothuizen, who was there at the time, in 1986. Today, in 2017, the painting is still hidden from view, concealed by weatherboarding installed to protect the building against damp.
Keith Haring began his career in 1980, drawing graffiti in the New York subway. In 1982, he started to show his work at the Tony Shafrazi Gallery, after which he began to exhibit worldwide. He had his first solo museum show in the Netherlands at the Stedelijk Museum Amsterdam in 1986 and had this to say about his exhibition: “…because it’s a major museum in Amsterdam, the show had phenomenal attendance. For me, it was an overwhelming experience, showing at the Stedelijk Museum. I felt I had accomplished something”. Haring’s activist art addresses themes which continue to hold relevance today, such as war, racism, drugs and AIDS – Haring died of complications related to the disease in 1990.

The Stedelijk has always maintained close ties with artists and given them space to develop new work. The relationship with the building of the Stedelijk also plays a prominent role. On many occasions, this has inspired the Stedelijk to commission artists like Daniel Buren and Dan Flavin, and currently, Seth Price, to create extraordinary site-specific installations for spaces in the building, such as the area surrounding the grand staircase.

On display at the Stedelijk From 12 October 2017