“What are the odds of finding a De Kooning in a storage unit?” – David Killen

David Killen purchased the contents of the locker for $15,000 in Ho-Ho-Kus, NJ from the estate of an art conservator who started the restoration and conservation department at the Guggenheim in the upper east side of NYC. The hoard of work was passed by a well known auction house which decided provenance would be too problematic to risk valuing the paintings.

The six paintings dating from the 1970s are apparently in the artist’s unique style and when shown to De Kooning’s former assistant as well as the expert Lawrence Castagna who worked for De Kooning and his wife, painter Elaine de Kooning. Castagna told the NY Post: “In my opinion, they are [by Willem de Kooning]. There’s no doubt about it.”

The 200 works contained in the lock-up were from the studio of art conservator, Orrin Riley, who died in 1986, and his partner Susanne Schnitzer, who died in 2009. Also found among the stored art was a work possibly by the early 20th-century Swiss-German Modernist Paul Klee. 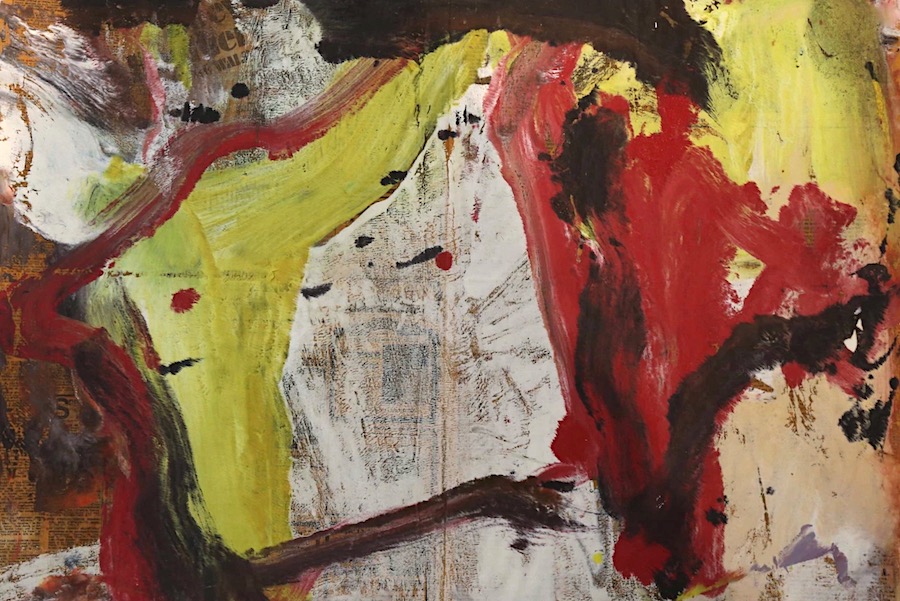 If the hoard of paintings discovered are authenticated they will be worth several million dollars. The paintings are not signed but were labelled De Kooning by Orrin Riley. The Willem de Kooning Foundation, in Manhattan, does not authenticate works. It will be difficult to prove whether the paintings are the real deal and Mr Killen will need to jump through a number of hoops to further establish the art. This will include pigment testing and an extensive search for the artist’s fingerprints on the canvases. An added question would be the establishment of ownership. Where were they acquired? and were they in Mr Riley’s possession to be restored by a client?

It’s not so long ago that a New York millionaire filed a lawsuit against the now defunct Knoedler & Company, once New York’s oldest commercial art gallery. The litigation sighted its former president, Ann Freedman with conspiracy to defraud by hard selling a fake Willem de Kooning painting for $4 million. The suit was settled for an undisclosed sum.

Willem de Kooning was born in Rotterdam, the Netherlands, in 1904. After training in the graphic and fine arts, he immigrated to the United States in 1926, where he quickly became part of the evolving modernist art movement in New York. His first solo exhibition—which included black-and-white abstractions—was held in 1948 at the Charles Egan Gallery, and was met with critical acclaim. A flurry of international exhibitions followed. In 1963, de Kooning moved from Manhattan to the East End of Long Island, New York, where he lived until his death in 1997. His work has been the subject of numerous museum retrospectives, including The Museum of Modern Art, New York (1969 and 2011–12), the Whitney Museum of American Art (1983–84), and the National Gallery of Art, Washington, DC (1994). In 1995, the San Francisco Museum of Modern Art organized the first major exhibition of paintings from the 1980s, which travelled to international venues, and to The Museum of Modern Art, New York. Recent exhibitions of the 1980s works include Willem de Kooning: Late Paintings, which opened at the State Hermitage Museum in St. Petersburg, Russia, in 2006, and travelled to the Carlo Bilotti Museum, Rome.