Francis Bacon’s late large-format Triptych Inspired by the Greek tragedy Oresteia of Aeschylus, will go under the hammer at Sotheby’s. This will be the highlight their Contemporary Art Evening Auction in New York on 13 May 2020, when it will be offered with an estimate in excess of $60 million.

The painting/group was acquired in 1984 by the Norwegian Collector Hans Rasmus Astrup. The Triptych Has Been in the Care of Astrup Fearnley Museet in Oslo Since Its Founding by Mr Astrup in 1993

Inspired by Aeschylus’s trilogy of Greek tragedies dating to the 5th century B.C., the present Triptych stands as one of the most ambitious, enigmatic, and essential works of Bacon’s oeuvre, and a landmark of 20th-century art. In this work from 1981, Bacon revisits the same classical text that inspired Three Studies for Figures at the Base of the Crucifixion, which announced his debut on the world stage in 1962 – which now resides in the Tate Collection, London. A parallel to that early triumph, Triptych Inspired by the Oresteia of Aeschylus reveals in a single work the entire range of Bacon’s iconography, developed over three decades of painting. 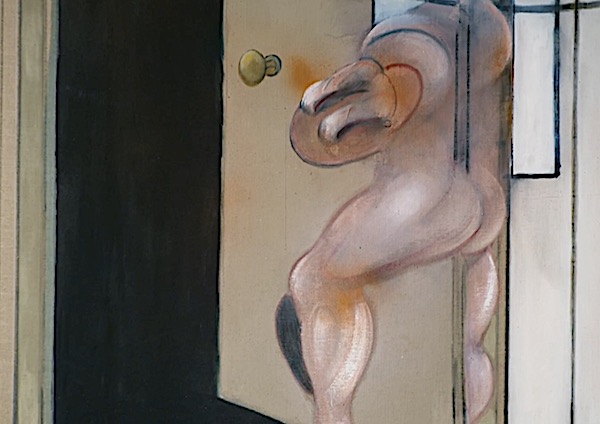 The triptych is one of 28 large-format triptychs (78 inches / 198 cm tall) that Bacon created between 1962 and 1991. The present example represents only the 6th large-format Triptych ever to appear at auction and the first to be offered since 2014. Triptych Inspired by the Oresteia of Aeschylus was most recently on view in the Centre Pompidou’s celebrated exhibition Bacon: Books and Painting.

Norwegian collector Hans Rasmus Astrup acquired Triptych Inspired by the Oresteia of Aeschylus from Marlborough Fine Art Ltd., London in 1984. The work has been in the care of Astrup Fearnley Museet in Oslo, a private museum founded by Mr Astrup in 1993 to manage his collection and allow public access to these private holdings.

In 2013, Mr Astrup donated all of his commercial assets and their holdings of art to the Hans Rasmus Astrup Foundation. Proceeds from the sale of Triptych Inspired by the Oresteia of Aeschylus will strengthen the Foundation and underlying entities to ensure long-term support of the Astrup Fearnley Museet, and in particular to expand and diversify the Astrup Fearnley Collection housed therein.

Alex Branczik, Head of Contemporary Art for Sotheby’s Europe, commented: “Francis Bacon is the great tragedian of his age. In this ambitious Triptych, the painter confronts Aeschylus, the progenitor of tragedy, so that the timeless power of the Ancient Greek genre is brought to bear on the human condition in the 20th century. The result is an arresting and original vision, a true masterpiece that confirms Bacon’s standing in the pantheon of modern masters.”

Branczik continued: “Over the decades, Hans Rasmus Astrup has put together one of the preeminent collections of Contemporary Art in Europe. An early advocate for the art of our time, he has never shied away from collecting and exhibiting the most radical and challenging contemporary artists, contributing significantly to the cultural landscape in Norway and beyond. At Sotheby’s, we are delighted to help support his vision so that Astrup Fearnley Museet can continue to be a Nordic beacon for contemporary artistic practice for decades to come.”

Bjørn Rønneberg, Chairman of Astrup Fearnley Museet, said: “While it is undoubtedly difficult to part with such an important work, this sale will support Astrup Fearnley Museet and secure a long, sustainable future for the institution as it enters a new chapter. In particular, the sale will provide significant funding to further support and diversify our collection through future acquisitions.”

Hans Rasmus Astrup added: “Astrup Fearnley Museet is meant to be a lasting resource for the public, as it builds on the existing collection and grows beyond it. With this single sale, we can ensure that the museum and collection are here in perpetuity.”

A masterpiece of the first order, Triptych Inspired by the Oresteia of Aeschylus provokes a range of interpretations, matching the tragic grandeur of the Greek playwright Aeschylus in a 20th-century setting.

Bacon’s theme of divine punishment is found in Aeschylus’ most famous trilogy, The Oresteia, in which Clytemnestra murders her husband Agamemnon in revenge for the sacrifice of their daughter, Iphigenia. When the son Orestes finds out, he kills his mother to avenge his father’s death, provoking the avenging Furies, also called the Eumenides, who determine to drive Orestes insane as punishment.

Bacon received a copy of William Bedell Stanford’s Aeschylus and his Style: a Study in Language and Personality soon after it was published in 1942. Aeschylus’s imagery provided Bacon with a vehicle for expressing “something very powerful and very fundamental about existence”. From Aeschylus’ imagery, Bacon compiled motifs that struck a chord with his own experience and filtered into his art. As he explains, “I’ll tell you what I really read: things which bring up images for me. And I find that this happens very much with the translations of Aeschylus. They open up the valves of sensation for me”.

Bacon used literary references to jolt his own imagination, having no interest in the lofty goals of narrative history painting. The purpose of Greek tragedy was to incite catharsis in the viewer – in appropriating its iconography, Bacon exorcised something in himself. The enduring appeal of his work is its power to provoke the most fundamental of human emotions endlessly. Although Bacon frequently cited Aeschylus as an inspiration, this was the only instance where the Greek dramatist was referred to in the title of a painting.

Matching the epic grandeur of the progenitor of tragedy, Bacon recorded something primal about the 20th century in Triptych Inspired by the Oresteia of Aeschylus. In doing so, he created a masterpiece of the modern age.