Sir Michael Craig-Martin has created a new work for an iconic site in London’s Oxford Street, which will be launched on Monday 29 June, presented by W1 Curates. The installation, Cornucopia Galactica, will run 24hrs a day until 12 July 2020.

For many years the artist has had an interest in creating public artworks for digital screens on the architectural scale now familiar in advertising. Still, the opportunities for artists to do so are rare. W1 Curates, a permanent digital art platform that launched in September 2019, seeks to address this situation by offering artists the creative use of their extraordinary 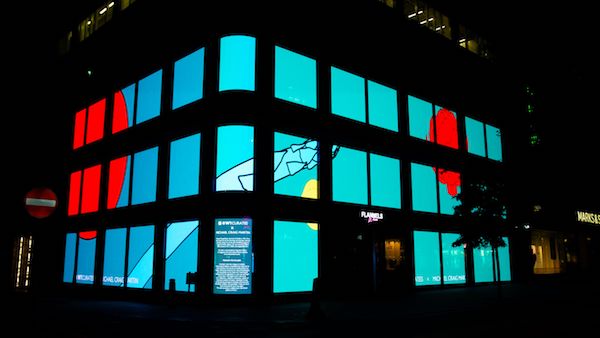 Describing his new work, Cornucopia Galactica, the artist said: “Normally I only draw images of ordinary mass-produced objects, everything from safety pins to shoes and chairs, from books to mobile phones and laptops. During the lockdown, the only direct shopping that was possible was for food, and I found myself looking at fruit and vegetables in a new way and began to draw them. This digital work is the result.

It is a celebration, a dynamic cornucopia, a galaxy of these magnificent wonders of nature, always moving, turning, spinning through an intensely coloured space like planets, satellites, and spaceships. I hope you never look at broccoli the same way again.”

Michael Craig-Martin was born in Dublin in 1941. He was educated in the United States, studying Fine Art at the Yale University School of Art. He came to Britain on completion of his studies in 1966 and has lived and worked there ever since.

His first solo exhibition was at the Rowan Gallery, London in 1969. He participated in the definitive exhibition of British conceptual art, The New Art at the Hayward Gallery in 1972. He is best known for his intensely coloured paintings, sculptures, prints and installations.

Over the past 50 years, he has done numerous exhibitions and installations in galleries and museums across the world, including the Centre Pompidou Paris and Museum of Modern Art NY, Kunsthaus Bregenz Austria, the Himalayas Museum Shanghai and the Hubei Museum Wuhan.

He represented Britain in the 23rd Sao Paulo Biennal. A retrospective of his work was presented at the Whitechapel Art Gallery London in 1989, and a second at the Irish Museum of Modern Art in Dublin in 2006.

His work is included in many museum collections, including the Tate, the British Museum, the V and A, the National Gallery of Scotland, the Museum of Modern Art New York, Centre Pompidou Paris, and the Reina Sofia Museum Madrid.