Restitution is proving to be a complex and challenging problem for many museums and private collections. This week alone, several cases have been filed. Reputations that were once beyond question have now been brought into question. 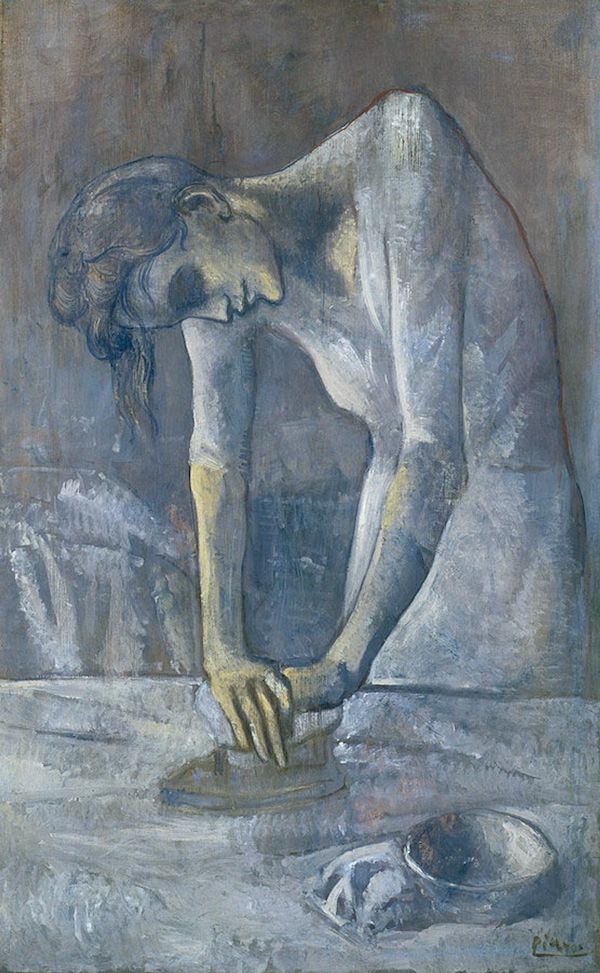 New York’s Guggenheim Museum is currently embroiled in a new lawsuit calling for the return of a critically important ‘Blue Period’ painting ‘Woman Ironing’ (1904) by Pablo Picasso. The papers state that it was sold under duress due to Nazi persecutors eight-five years ago. The painting was sold to the art dealer Heinrich Thannhauser’s son, Justin Thannhauser, for $1,552, $32,000 in today’s money.

The masterpiece was owned by Karl Adler and his wife Rosi Jacobi, who fled Nazi persecution, having sold all of their collection at a below-market value. The plaintiffs in the case, including one of Adler and Jacobi’s descendants, Thomas Bennigson and numerous Jewish charities, are seeking the return of the artwork or $100m to $200m in damages.

“Adler would not have disposed of the painting at the time and price that he did, but for Nazi persecution to which he and his family had been, and would continue to be, subjected,” the lawsuit reads.

The case, which was filed under the provisions of the 2016 Holocaust Expropriated Art Recovery Act, will be judged on whether the artwork was sold illegally or through extortion.

Picasso’s “Woman Ironing” was Completed during his pivotal Blue period (1901–04). It is a celebrated demonstration of the sensitivity, skill, and emotion with which Picasso depicted the working poor. The painting’s melancholy surface palette of whites and blue greys evokes empathy for the complex, labour-intensive daily life of the subject—a life Picasso experienced himself during his first years in Paris when Woman Ironing was painted. Picasso was a young, unknown artist living in relative poverty at that time.
The painting is an evocative portrait of a Parisian laundress. A study of Woman Ironing completed in 1989 revealed a clear picture of a man beneath the surface of the 1904 composition. However, technological limitations prevented further discovery about the underlying portrait until recently, when developments in imaging techniques allowed researchers to see it with greater clarity. 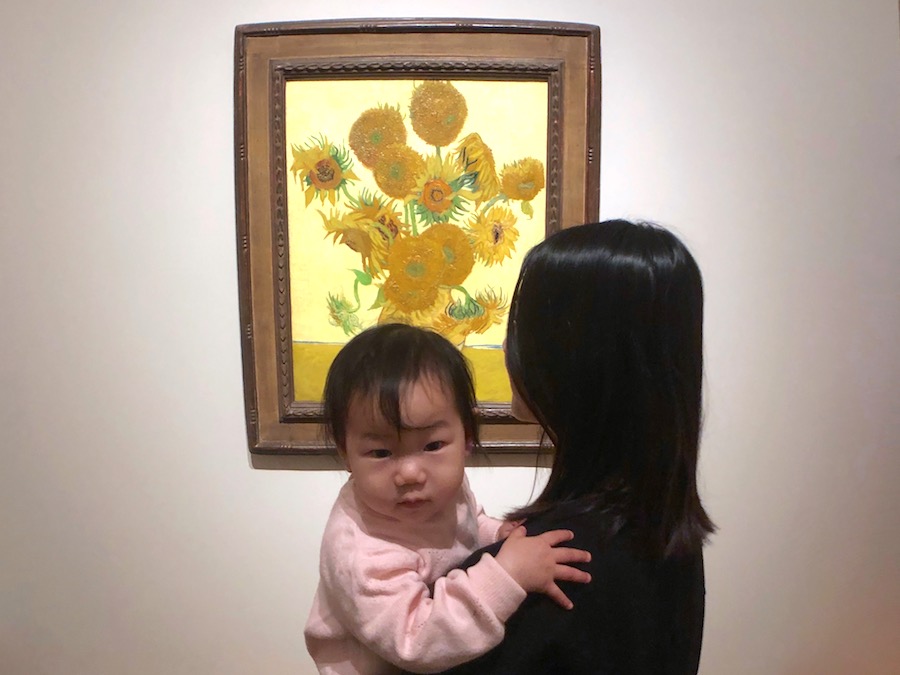 Vincent Van Gogh’s “Sunflowers,” currently on display in a private Tokyo museum, has been deemed by plaintiffs to have been sold under duress by its owners when the Nazis came to power in Germany in the 1930s. As a result, a lawsuit by the family is asking for its return.

The masterpiece was sold in an auction in 1987, achieving a record price for the artist’s work at the time. The Yasuda insurance company acquired it to display in the Sompo Museum, a private art museum on the 42nd floor of its Tokyo headquarters.

The heirs of a German/Jewish banker Paul von Mendelssohn-Bartholdy, now want it returned to the family. In December 2022, a 98-page “complaint for restitution and unjust enrichment” was filed in the U.S. District Court of the Northern District of Illinois. It states Defendants have commercially exploited, as a corporate emblem, what they have long known was a Nazi-tainted artwork.

The plaintiffs are Julius Schoeps, Britt-Marie Enhoerning and Florence von Kesselstatt, who is claiming on behalf of more than 30 Mendelssohn-Bartholdy beneficiaries. The case is handled by Chicago-based lawyers K&L Gates and Washington, DC-based Byrne Goldenberg & Hamilton.

The Sompo Museum describes the artwork, “This is a painting that is one of the most famous works by Vincent van Gogh. On February 1888, Van Gogh departed from Paris for Arles in southern France, where he planned to live and work together with his close friend painters. He also invited a painter, Paul Gauguin, whom Van Gogh respected strongly, as a leader of this community. The Sunflowers was painted while Van Gogh was waiting for Gauguin’s arrival with the purpose of decorating his room. The Sunflowers, which is now in our collection, must have been painted between late November and early December, when Van Gogh and Gauguin lived together, and based on the first ‘Sunflowers on yellow background’, painted in August 1888, now in the collection of the National Gallery in London. Though the basic colour and composition of the Tokyo version is the same as London’s, the brush strokes or colour tones of these two paintings are slightly different. It suggests that Van Gogh worked on this painting with many considerations rather than making a mere copy.” 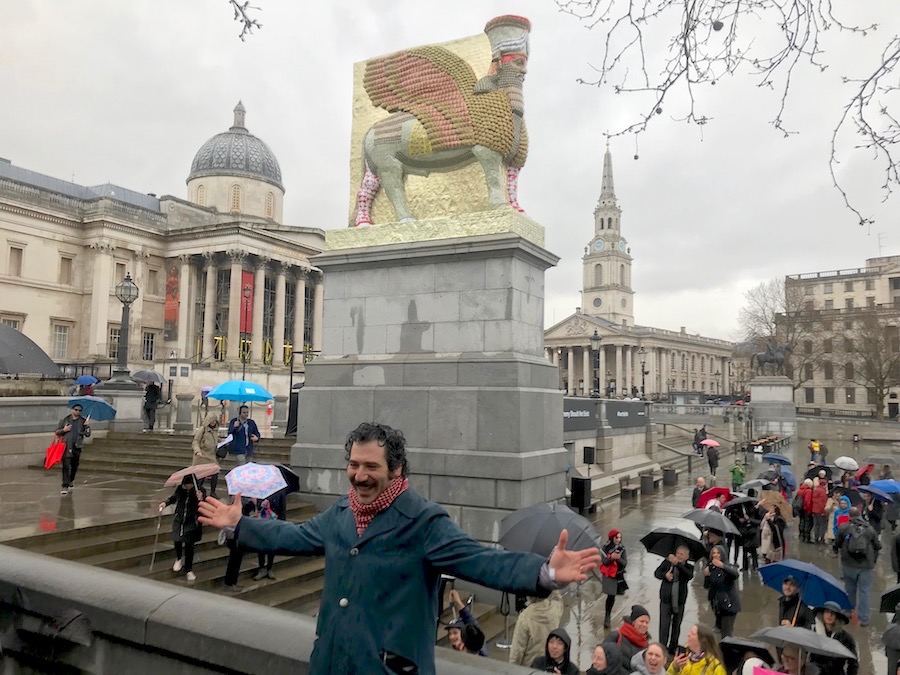 The Iraqi American artist Michael Rakowitz has offered to trade his Fourth Plinth Sculpture depicting a Babylonian Lamassu made from date tins in exchange for repatriating the ancient original held in the British Museum to Iraq. The proposal will be addressed next month during a visit of Iraq’s culture ministry to London.

The Invisible Enemy Should Not Exist a project that Rakowitz started in 2006 that attempts to recreate over 7,000 archaeological artefacts looted from the Iraq Museum during the war or destroyed in its aftermath; for the Fourth Plinth, Rakowitz will recreate the Lamassu, a winged bull and protective deity that stood at the entrance to Nergal Gate of Nineveh from c 700 B.C. until it was destroyed by ISIS in 2015. The Lamassu will be made of empty Iraqi date syrup cans, representing a once-renowned industry decimated by the Iraq Wars. It will occupy the plinth for two years, until March 2020.

The proposal comes at a time when many museums have given back high-profile artworks including Benin Bronzes, Italian antiquities and other fragments from the Parthenon that were returned last month by the Vatican. There are also signs that a resolution between the British Museum and Greece could form a share deal between the two countries in respect to the Elgin/Parthenon marbles.

Michael Rakowitz was born in New York in 1973 and lives and works in Chicago, where he is a professor at Northwestern University. His first museum survey, Backstroke of the West, was at the Museum of Contemporary Art in Chicago in 2017/18. Rakowitz’s work explores global issues and invites others into the conversations fostered by his public projects, installations and events.