The Danish Icelandic artist Olafur Eliasson has announced a new Earth Day project in association with the Serpentine Galleries. Earth perspectives, a new participatory artwork will be launched on Earth Day on Wednesday 22 April 2020 as part of Back to Earth, a new, multi-year project by the Serpentine Galleries that invites artists, scientists, architects, musicians and more to make work that responds to the climate emergency.

The current health crisis has affected our economies, our freedoms, and even our social ties – OE

Olafur Eliasson’s relationship with the Galleries dates to his commission for the Serpentine Pavilion made with Kjetil Thorsen in 2007 and his participation in the Experiment Marathon that autumn. Eliasson’s new work, Earth perspectives encapsulates how maps, space, and the Earth itself are human constructs, which we have the power to see from other perspectives, whether individually or collectively. 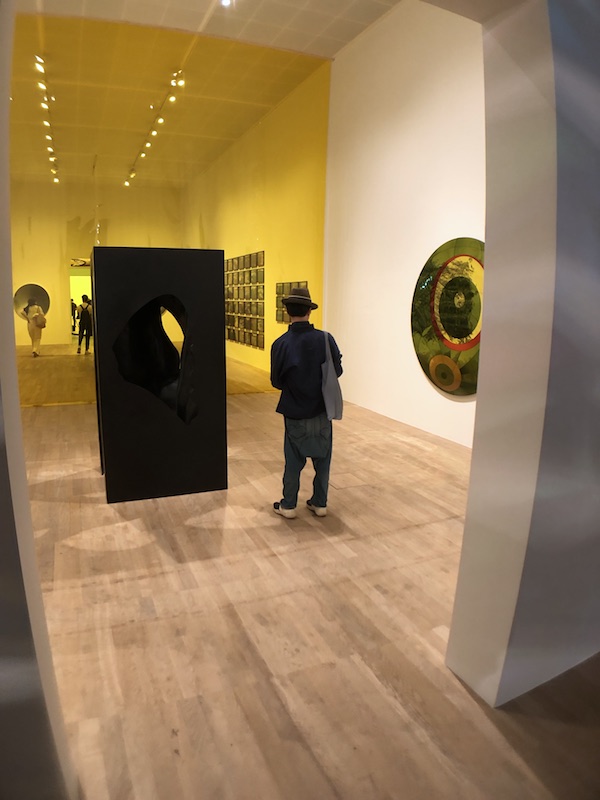 Hans Ulrich Obrist, Artistic Director and Bettina Korek, Chief Executive, Serpentine Galleries said: “For our 50th-anniversary programme, we have invited artists, thinkers, designers and architects from across the world to create works that respond to the climate emergency. Ecology is an integral component of the Serpentine’s history, and very much of our present, as well, as we now exist in a society adapting to a world changed by a coronavirus. We must look to artists for guidance on how to shape the future and we are honoured that Olafur Eliasson has produced a new work for Back to Earth.”

“Today, ‘the world as we know it’ is a phrase of the past. The current health crisis has brought our societies close to a halt, affecting our economies, our freedoms, and even our social ties. We must take the time to empathise with all those struck by the crisis and also seize this opportunity to imagine together the Earth that we want to inhabit in the future – in all its wonders and beauty, in the face of all the challenges ahead of us. – Olafur Eliasson

Earth perspectives envision the Earth we want to live on together by welcoming multiple perspectives – not only human aspects but also those of plants, animals, and nature. A glacier’s view deviates from that of a human. The same goes for a river. On Earth Day, I want to advocate – as on any other day – that we recognise these various perspectives and, together, celebrate their co-existence.”

Back to Earth will run throughout the Galleries’ programmes onsite, offsite and online, in 2020 and beyond.

Olafur Eliasson’s art is driven by his interests in perception, movement, embodied experience, and feelings of self. He strives to make the concerns of art relevant to society at large. Art, for him, is a crucial means for turning thinking into doing in the world. Eliasson’s works span sculpture, painting, photography, film, and installation. Not limited to the confines of the museum and gallery, his practice engages the broader public sphere through architectural projects, interventions in civic space, arts education, policy-making, and issues of sustainability and climate change.

Eliasson was born in 1967. He grew up in Iceland and Denmark and studied from 1989 to 1995 at the Royal Danish Academy of Fine Arts. In 1995, he moved to Berlin and founded Studio Olafur Eliasson, which today comprises a large team, including craftsmen, architects, archivists, researchers, administrators, cooks, programmers, art historians, and specialised technicians.

Since the mid-1990s, Eliasson has realised numerous major exhibitions and projects around the world. In 2003, Eliasson represented Denmark at the 50th Venice Biennale, with The blind pavilion. Later that year, he installed The weather project in Tate Modern’s Turbine Hall, London. Take your time: Olafur Eliasson, a survey exhibition organised by SFMOMA in 2007, travelled until 2010 to various venues, including the Museum of Modern Art, New York. Innen Stadt Aussen (Inner City Out), at Martin-Gropius-Bau in 2010, involved interventions across Berlin as well as in the museum.

Similarly, in 2011, Seu corpo da obra (Your body of work) engaged with three institutions around São Paulo – SESC Pompeia, SESC Belenzinho, and Pinacoteca do Estado de São Paulo – and spread out into the city itself. In 2014, Riverbed filled an entire wing of Denmark’s Louisiana Museum of Modern Art with stones and water, emulating a river in a rocky landscape; later that year, Contact formed the inaugural exhibition at Fondation Louis Vuitton, Paris. Verklighetsmaskiner (Reality machines), at the Moderna Museet in Stockholm in 2015, became the museum’s most visited show by a living artist. In 2016, Eliasson created a series of interventions for the palace and gardens of Versailles and mounted two large-scale exhibitions: Nothingness is not nothing at all, at Long Museum, Shanghai, and The parliament of possibilities, at Leeum, Samsung Museum of Art, Seoul. Green light – An artistic workshop, created in collaboration with TBA21 (Thyssen-Bornemisza Art Contemporary), offers a response to the challenges of mass displacement and migration. Hosted initially by TBA21 in Vienna in 2016, the project was part of Viva Arte Viva, the 57th International Art Exhibition – La Biennale di Venezia, in 2017. Eliasson’s site-specific installation Reality projector opened at the Marciano Foundation, Los Angeles, in March 2018, the same month as his solo exhibition The unspeakable openness of things at Red Brick Art Museum, Beijing. Olafur Eliasson: WASSERfarben opened at the Staatliche Graphische Sammlung in the Pinakothek der Moderne, Munich, in June 2018. In July 2019, Eliasson’s In real life opened at Tate Modern, London, and, in 2020, the exhibition travelled to Guggenheim Museum Bilbao. In 2020 Eliasson also opened Symbiotic seeing at Kunsthaus Zurich. 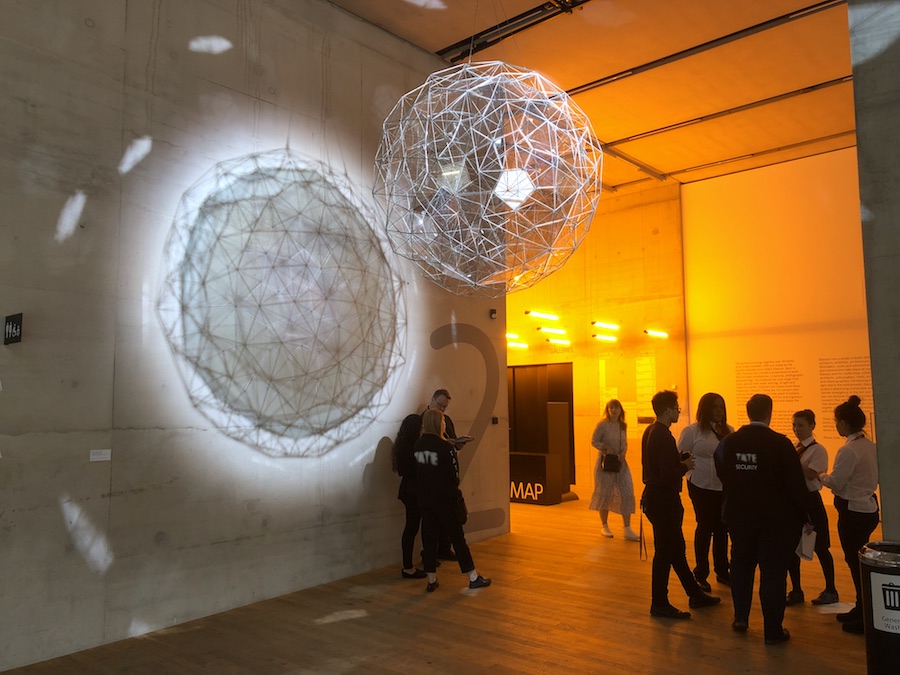 Eliasson has also produced numerous projects in public space. Green River was carried out in various cities between 1998 and 2001. Eliasson designed Serpentine Gallery Pavilion 2007 together with architect Kjetil Thorsen for London’s Kensington Gardens. The New York City Waterfalls, commissioned by the Public Art Fund, were installed along the city’s waterfronts in 2008. Your rainbow panorama, a circular coloured-glass walkway atop ARoS Museum, Aarhus, Denmark, opened in 2011. Harpa Reykjavik Concert Hall and Conference Centre, 2011, for which Eliasson created the facades in collaboration with Henning Larsen Architects, won the Mies van der Rohe Award 2013. Ice-Watch brought melting icebergs from Greenland to Copenhagen in 2014 and to Paris on the occasion of the COP21 Climate Conference in 2015. Fjordenhus in Vejle, Denmark, the first building designed entirely by Eliasson, Sebastian Behmann, and Studio Olafur Eliasson, was completed in June 2018.

In 2012, Eliasson and engineer Frederik Ottesen founded the social business Little Sun. This global project provides clean, affordable energy to communities without access to electricity, encourages sustainable development through sales of Little Sun solar-powered lamps and chargers, and raises global awareness of the need for equal access to energy and light (www.littlesun.com).

In 2019 Eliasson was appointed Goodwill Ambassador for renewable energy and climate action by the United Nations Development Programme. He lives and works in Copenhagen and Berlin.

Back to Earth emerges from the Serpentine’s long-standing engagement with ecology and the entanglement of topics it touches. Key thematic commissions include artist Gustav Metzger’s landmark solo show Decades (2009), and the 2014 Extinction Marathon, which Metzger co-curated. Now well established, General Ecology is the Serpentine’s multi-disciplinary and multi-platform strand that embeds environmental and ecological concerns across the Galleries’ programmes, infrastructure and networks.

The Serpentine was the first contemporary art institution to appoint a curator dedicated to ecology, Lucia Pietroiusti, who oversees General Ecology.

Back to Earth is a new multi-year project that invites over sixty leading artists, architects, poets, filmmakers, scientists, thinkers and designers, to devise artist-led campaigns, protocols and initiatives responding to the environmental crisis, with the support of partner organisations and networks. Interdisciplinary at its very core Back to Earth will manifest throughout all of the Galleries’ programmes onsite, offsite and online, sharing its resources to amplify ongoing projects or campaigns or develop new ones.