Pierre Soulages, 1919 – 2022 (b. Rodez, France) French artist internationally known as “the painter of black and light,” who created a vast body of abstract paintings has died aged 102.  Soulages forged a career of great inventiveness and longevity that sealed his place in art history.

When light is reflected on black, it transforms and transmutes it. It opens a mental field all its own – PS

Growing up in Rodez, France, Soulages was fascinated by the stone monoliths and other archaeological artifacts displayed at the local natural history museum, the Musée Fenaille. Deeply influenced by the concept of prehistoric men painting on the walls of caves, prehistoric art became his main source of visual inspiration. 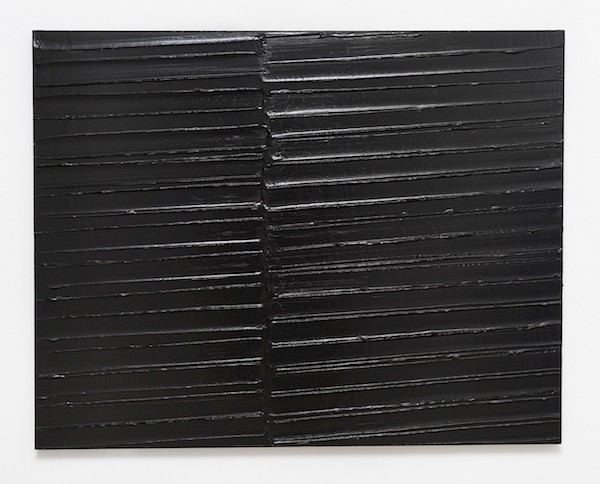 Soulages moved to Paris at the age of eighteen, where he practiced as an artist until he was drafted into military service in Montpellier at the start of World War II. Following the war Soulages returned to Paris, where he opened a studio and held his first exhibition at the Salon des Indépendants in 1947.

Soulages said, “My instrument is not black but the light reflected from the black.” Black, manipulated both as a medium and tool, is the essential foundation of Soulages’ work. His enormous oeuvre, a large proportion of which is housed in Rodez’ devoted Soulages Museum, is united by his fascination for the changing appearance of black in light. Since the beginnings of his career as an artist Soulages has consistently been drawn to the reflective and absorptive qualities of black paint. Soulages began exploring the relationship between black and light in the 1940s in the form of boldly gestural abstract paintings . In 1979, Soulages began to forgo colour entirely in favour of thickly encrusted all-black paintings that he calls ‘ultra black’ or outrenoir. Since then, Soulages has worked exclusively in black. Rejecting traditional painting equipment, Soulages frequently uses wood panels, cardboard and miscellaneous objects from his studio to apply, scrape and hatch paint into defined areas of the canvas. On the genesis of his signature style, Soulages once remarked: ‘I found that the light reflected by the black surface elicits certain emotions in me. These aren’t monochromes. The fact that light can come from the color which is supposedly the absence of light is already quite moving, and it is interesting to see how this happens. I realized I needed to find a word that could convey the mental field opened up by these paintings.’

In celebration of the artist’s 100th birthday in 2019, the Louvre honoured the French painter with a solo show. Significantly, the only other artists given this privilege during their lifetimes have been Picasso and Chagall. Soulages has been the subject of dozens of major retrospectives held at institutions across the world, including the National Art Museum of China, Beijing; Centre Georges Pompidou, Paris; The Museum of Fine Arts, Bern; Taipei Fine Arts Museum; and The National Museum of Modern and Contemporary Art, Seoul.

LGDR his gallery had this to say:

It is with profound sadness that we share the news of the passing of our dear friend and artist Pierre Soulages. The most significant and internationally recognized artist of his time in France, he was 102 years old. Our thoughts and most sincere condolences are with Colette Soulages, the artist’s wife and partner of 80 years, as well as his family, friends, studio, and Alfred Pacquement, president of the Musée Soulages. We have been immensely privileged and honored to work closely with Soulages for nearly two decades. While to most, he is known as the painter of black, we hope he will forever be remembered as the painter of light. Soulages was a prolific creative force—a painter, sculptor, and draftsman—who approached his work not only with skill and intuition, but also with conceptual, philosophical, and alchemical rigor. He forged a career remarkable for its openness to reinvention and its longevity. Through his astonishing body of work, Soulages beckoned us to look at art with incisiveness, curiosity, and wonder. He leaves a legacy of influence that can be felt throughout generations of artists and around the world. We are so grateful to have shared in the gift of his and Colette’s friendship, and his artistic collaboration and breathtaking work.
“Saying goodbye to Pierre is saying goodbye to not only an incredible artist, but a man of exceptional generosity, kindness, and intelligence. It has been an honor knowing him, working for him, and being one of his many ambassadors in the art world. He leaves an indelible mark on 20th-century art.”
— Dominique Lévy, Co-Founder, LGDR