The children’s author and illustrator Raymond Briggs, best-known for his 1978 book/film The Snowman, has died aged 88.

The Snowman went on to win Bafta Awards and has become a Christmas classic eagerly awaited by generations of fans worldwide. It was first broadcast on Channel 4 on Boxing Day 1982 and has aired during the Christmas season annually. In the 1990s, he produced When the Wind Blows, a frightening story about the effects of nuclear war on ordinary people.

His death was confirmed by his family, who said he “was much loved and will be deeply missed”.

Issey Miyake, who died this week, aged 84, was an innovative Japanese fashion designer who seamlessly merged art and fashion. He was best known for his technology-driven clothing designs.

In 1969, Issey Miyake moved to New York City, where he met artists like Christo and Robert Rauschenberg. He enrolled in Columbia University’s English classes and worked on Seventh Avenue for designer Geoffrey Beene. Returning to Tokyo in 1970, he founded the Miyake Design Studio, a high-end producer of women’s fashion. ISSEY MIYAKE’s first collection was launched in New York in 1971 and began to be shown in Paris Fashion Week from AUTUMN WINTER 1973.

From the very beginning to this day, Issey Miyake’s design has focused on the concept of “A Piece of Cloth”. ISSEY MIYAKE broke the boundaries between East and West and pursued “the body, the fabric covering it and a comfortable relationship between the two” as a fundamental concept, shocking and resonating with people worldwide.

MIYAKE has grown to include many creative personnel and innovative new techniques. Still, its core design style – creating clothes from original materials starting with the research of a single thread – has transcended generations.

In a town not unfamiliar with colourful personalities, Peter Waldron was for several decades one of the most familiar figures about the streets and pubs of Hastings Old Town, in later years given to striking attire which might include a flamboyant shirt, unusual spectacles, or those notorious bright yellow shoes.

Many people felt they had a special relationship with Pete and would have all been right because he had an extraordinary gift for friendship with both men and women. He was wonderful, humorous company when with a group but could also be perceptive and sympathetic when discussing the more serious aspects of life with a friend in the corner of The Filo or The Crown. 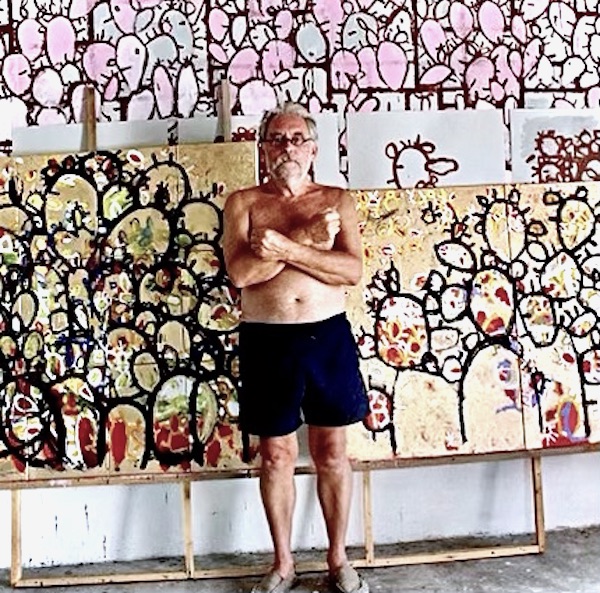 Pete was born into a Swindon railway family and had a happy childhood. Later, as a student, he gave up his engineering studies for fine art, first at Swindon and then Chelsea Art College, where he met life model Chris and moved to live in Notting Hill with her and her young daughter Sarah.

In 1969 Richard Hamilton was instrumental in getting him his first solo show, which took place at Nottingham University. From 1967 to 1969 he was studio assistant to Patrick Caulfield. He has had solo exhibitions at the Serpentine Gallery and The Museum of Modern Art, Oxford. His work was also shown at The Royal Academy’s Big Paintings exhibition and at the Whitworth in Manchester.

In the mid-1970s, Pete and Chris moved to Hastings joining a new wave of painters arriving in the town attracted by the low property prices, fine light and picturesque surroundings. They lived in George Street and later bought a small village house In Crete, which he adored. He absorbed the Cretan lifestyle, took Greek lessons and painted to his heart’s content.

Back home, Pete earned a living as an antique dealer specialising in the Arts & Crafts period but not ruling anything of quality out if it happened to catch his eye. He charmed both sellers and buyers alike and unearthed many treasures, but painting was always the real focus of his attention.

Following Chris’s death, he lived happily in Croft Road with his new wife, Lois. A studio was built in the courtyard behind the house, and they spent half of every year living in Crete.
Pete was always passionately committed to his vocation as an artist. Over the years, his work was subjected to many changes in style and did not always find favour with the wider public, but Pete never lacked self-belief at the time of his death. He was finding real success with one-person shows in London, Bath, Chichester, Rye, Hastings and Crete. Following Lois’s death in 2019 and towards the end of his own life, Pete met Anne and found her new hope for the future, which sadly was not to be.

Matthew Burrows, MBE, of the Artist Support Pledge, where Peter had developed a new outlet for his work during lockdown, said, ” Peter used black with such lightness. You could even say his paintings were black and light. I always enjoyed seeing this lightness in action in his studio, where work evolved over long periods. Like his paintings, Peter was good company. Witty without malice or self-aggrandisement, he could laugh at himself whilst maintaining a confident torch to his commitment as an artist. A commitment to form and shape and its tension across a surface. It always amazed me that he could contain so much with so little.