It is rare for a major painting by Antoine Watteau (1684 – 1721) to surface on the open market. Most are held in leading museums and public collections around the world.

The announcement of the rediscovery of  ‘Le Pèlerinage, a l’Ile de Cythère’, has created quite a stir in the artworld. The small canon of paintings by the French master are well documented in Watteau’s existing catalogue raisonne, so the addition of this painting is much to excite the academic community and a vast number of Watteau fans. The painting provides a crucial, previously unknown stage in the artist’s oeuvre. One of the artist’s most celebrated masterpiece, ‘The Embarkation to Cythera’, in the Louvre Museum in Paris is comparable. 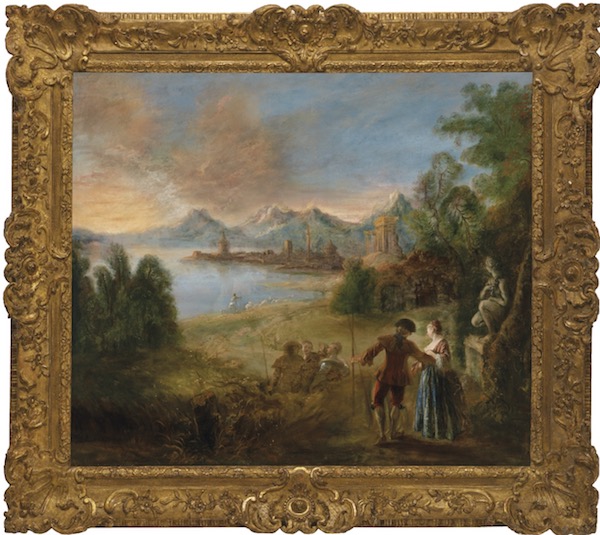 ‘Le Pèlerinage, a l’Ile de Cythère’, is more extensive in scale than most existing Watteau paintings, audacious in its sweeping and panoramic conception of the landscape, and bold in its quick and fluent brushwork.

The picture was catalogued in detail in a number of 18th-century collections and sales, clearly identified as a work by Watteau by people who were contemporaries or near contemporaries of the artist. During the 19th century, the attribution was lost. Now, the picture has been re-attributed to Watteau. The contemporaneous attributions to Watteau are further supported by recent and extensive scientific examination, which has revealed, among other details, that the painting was created using Watteau’s distinctive methods using materials consistent in age and type with his work. The present painting will be included in the forthcoming catalogue raisonné of Watteau’s paintings by Alan Wintermute.

Jean-Antoine Watteau 1684 – 1721
Watteau was one of the most influential French painters of the early 18th century. He painted numerous scenes with Commedia dell’Arte characters. Also, he invented a type of painting known as the Fête Galante – small cabinet pictures which explored the psychology of love, usually in a landscape setting. Other painters, including Lancret and Pater, took up the theme.

Watteau was born in Valenciennes in the north of France and arrived in Paris in 1702. The influence of Rubens and other Flemish and Dutch painters of the 17th century, including Teniers, remained with him during his years of training in Paris with (possibly) Abraham Metayer, Claude Gillot (about 1705/8) and Claude Audran III (about 1708/9). In 1712 he was admitted as a probationer to the French Academy, becoming a full member in 1717 with the presentation of his ‘Pilgrimage to the Isle of Cythera’ (Paris, Louvre), for which the Academy created the new category of Galante. He also made many paintings of Italian comedy, or Commedia dell’Arte, in which he explored the expressive potential of its famous characters, Pierrot, Columbine and Harlequin.

‘Le Pèlerinage, a l’Ile de Cythère’ will be offered as part of Christie’s Old Masters sale on 25 January in New York. Alan Wintermute, the author of the forthcoming catalogue raisonné of Watteau’s paintings, has also been excited by the discovery with an overview of its history and a thrilling technical analysis of the painting itself.