Applications hosted on a website raising money by selling an edition of 50 Banksy Prints have been under cyber attack by Russia. The limited-edition artworks received several thousand suspicious bids originating from sources in Russia.

The print on sale in December depicts a white rat hanging on for dear life as he slips down a sheet of cardboard. The word “Fragile” is printed on the box. Proceeds will go to international efforts in Ukraine regions devastated by the war.

Collectors were asked to register interest online to buy one of the prints, priced at £5,000 ($6,000) each. However, when applications opened, the hosting service was overwhelmed by spammed entries from sources in Russia.

“We are currently sifting through the registered entries and will notify successful applicants shortly,” the Legacy of War Foundation wrote in a message published on the print sale landing page. “The site received over 1 million requests (and 3,500 hostile attacks from Russian IP addresses), so we would appreciate your patience at this time,” the U.K.-based charity further explained.

Representatives from the foundation did not immediately respond to a request for more information, including how “successful applicants” are being chosen and why the attacks from Russians were deemed “hostile.” 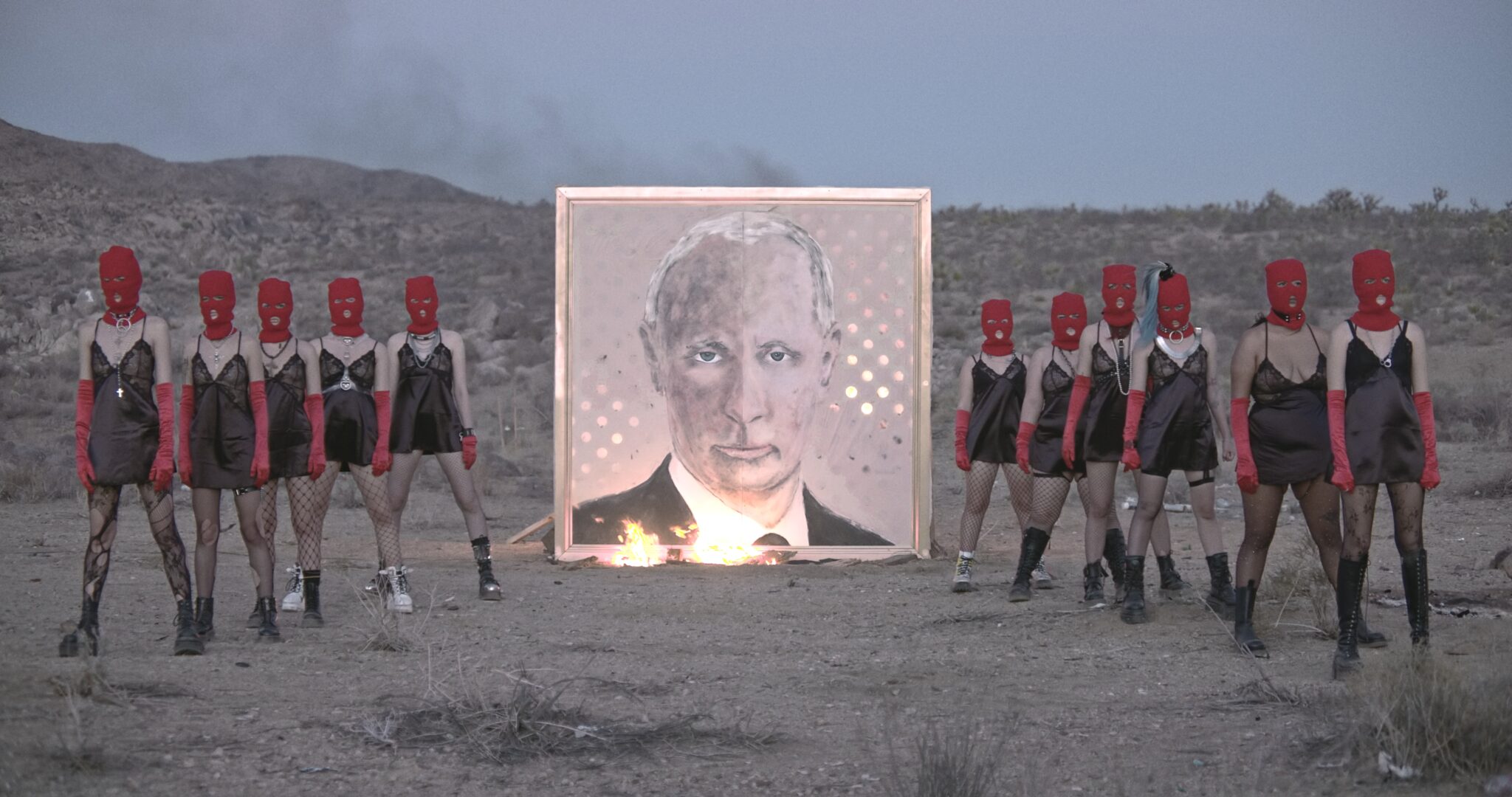 Created in response to Putin’s war in Ukraine, Putin’s Ashes was initiated in August 2022, when Pussy Riot burned a 10 x 10-foot portrait of the Russian president, performed rituals, and cast spells aimed at chasing Putin away. Twelve women participated in the performance. To join, women were required to experience acute hatred and resentment toward the Russian president. Most of the participants were either Ukrainian, Belarusian, or Russian.

Pussy Riot’s founding member Nadya Tolokonnikova bottled the ashes of the burnt portrait and incorporated them into her objects that are being presented alongside her short art film, Putin’s Ashes, directed, edited, and scored by Tolokonnikova. See the trailer video for Putin’s Ashes here.

“While working with artefacts, bottling ashes, and manufacturing the faux furry frames for the bottles, I used skills that I learned in the sweatshops of my penal colony. I was forced to sew police and army uniforms in a Russian jail. I turned what I learned in my labour camp against those who locked me up. Putin is a danger to the whole world and has to be stopped immediately,” says Tolokonnikova.

Conceptual performance artist and activist Nadya Tolokonnikova is the founding member of Pussy Riot, a global feminist protest art movement. Today, hundreds of people identify as a part of the Pussy Riot community.

In 2012, Tolokonnikova was sentenced to two years imprisonment following an anti-Putin performance. Tolokonnikova went through a hunger strike protesting savage prison conditions and was sent far away to a Siberian penal colony, where she managed to maintain her artistic activity and, with her prison punk band, made a tour around Siberian labour camps. In addition, Tolokonnikova published the book Read and riot: Pussy Riot’s guide to activism in 2018.

Tolokonnikova is co-founder of the independent news service and media outlet Mediazona. She had spoken before the United States Congress, British Parliament, and European Parliament and appeared as herself on season 3 of House of Cards.

Pussy Riot’s Punk-prayer was named by The Guardian among the best art pieces of the 21st century (“feminist, explicitly anti-Putin, protesting the banning of gay pride and the Orthodox church’s support of the president”). The movement has collaborated with Bansky on his Dismaland exhibition, was endorsed by Marina Abramovic and Ai Weiwei, and has created an immersive experience at Saatchi Art Gallery in London. 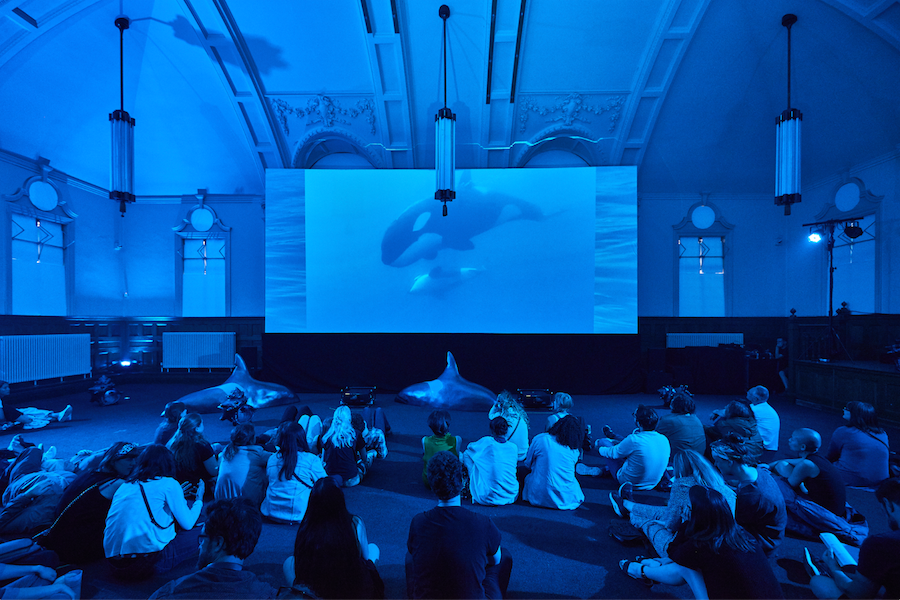 Internationally renowned art festival set to take place in Dundee in 2023 in collaboration with local organisations and community groups  In 2023, the internationally renowned contemporary art festival Art Night will deliver its first complete iteration in a city outside London – Dundee. In June 2023, over one packed weekend, organisers will present ten major new commissions in civic spaces across the city by internationally significant and emerging artists. The free festival will be brought to Dundee in partnership with Dundee Contemporary Arts (DCA). The scheduled date is the evening of the 24th of June, 2023. Art Night will also collaborate with V&A Dundee; Creative Dundee; NeoN Digital Arts; Cooper Gallery, Duncan of Jordanstone College of Art & Design (DJCAD) at the University of Dundee; GENERATORprojects; Dundee City Council, Dundee Heritage, and Hospitalfield, Arbroath.

The commissions will comprise ambitious live events, installations and performances and be presented in well-known Dundee locations, bringing to audiences and participants world-class cultural opportunities in the city.

Art Night has delivered four editions of the festival in London (2016-2019) in collaboration with major partners such as The Hayward Gallery and the ICA and showing work by globally significant artists such as Barbara Kruger; Joan Jonas; Zadie Xa; Celia Hempton; Mark Leckey; Christine Sun Kim; Frances Stark and Alberta Whittle. In addition, one edition took place across the UK and online (2021) during the Pandemic, including an outdoor commission by the Guerrilla Girls in Dundee, which was also installed in further sites across Scotland, England and Wales alongside other works and projects. The Dundee festival will be the first time an entire festival has occurred in a city outside London. Since 2019, Art Night has been curated by Artistic Director Helen Nisbet, a Shetland and London-based curator and a team of curators and project workers based in Dundee.

Art Night Dundee will take place primarily around the city centre of Dundee. Many commissions will be developed in partnership with local communities, and the majority will be produced as co-commissions with local, national and international partners. The festival will employ local artists and arts workers. Some works will be installed longer than the ‘festival’ weekend for audiences to engage with across the summer of 2023. One piece will be gifted to a local collection after the project ends, creating a further legacy of the festival in the city. It can be announced now that one commission will be a new work by Turner Prize-winning artist Tai Shani.

Art Night will take place in Dundee in June 2023