Louvre Abu Dhabi – The influx of immigrants into any vernacular urban culture has always been a gamechanger, and there is no better example than Paris at the turn of the 20th century. It was a hotbed of activity which sparked the creation of what would become known as the ‘École de Paris’ (‘School of Paris’).

Rendez-vous in Paris spotlights a crucial moment in art history. It is a landmark showcase for this region – Manuel Rabaté Director of Louvre Abu Dhabi

After the Impressionist and Post-Impressionist movements, the French Capital saw a remarkable artistic reawakening. This can be directly credited to the influx of painters, sculptors, and photographers – many of them women – disenfranchised from their own countries across Europe, Asia, and the Americas. The global climate had reached an insufferable level of religious and political intolerance (sound familiar?) with many seeking solace in the ‘City of Light’.

France’s intellectual openness and tolerance allowed artists to live and work amid new-found liberalism where almost anything was acceptable. A number of artists gained stimulus from Primitive Art and looked to the developing world for inspiration, long before it was deemed cultural appropriation. 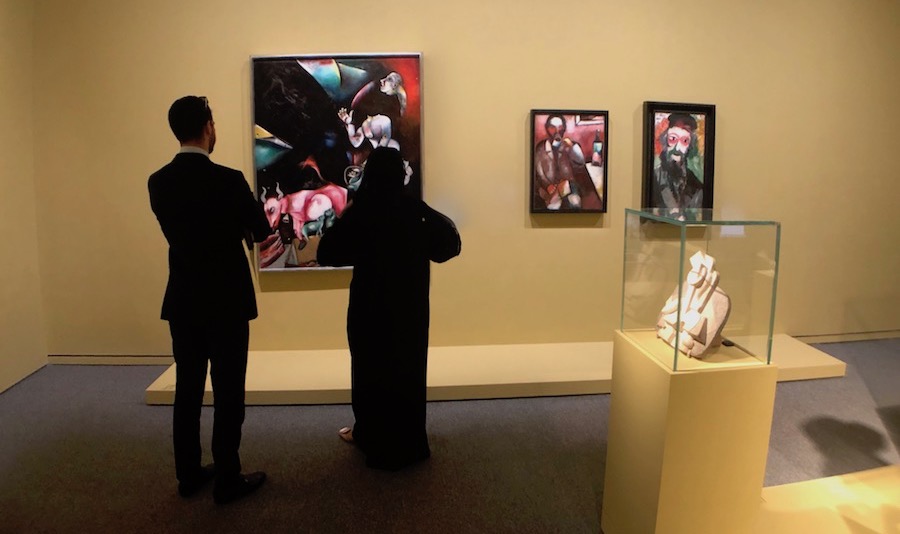 Now a new exhibition titled ‘Rendezvous in Paris’ at the Louvre Abu Dhabi addresses this seminal period with a thoughtfully-curated exhibition by Christian Briend, Chief Curator, Head of modern collections, MNAM-CCI assisted by Anna Hiddleston-Galloni, Assistant Curator, Modern collections, MNAM-CCI. It has been organized in partnership with the Centre Pompidou in Paris and Agence France-Muséums.

This major show displays some of the best-known names of the Modern movement including Picasso, Modigliani, Soutine, Chagall, Kupka and Sonia Delaunay. These artists represent an era that created many isms along the way. The exhibition contains eighty-five avant-garde works of the highest quality. The show champions a wave of artists of all nationalities and many religious backgrounds, who made Paris their home, fostering cross-fertilization of visual styles.

At the time of this loose formation, The School of Paris group were frowned upon by the French art establishment. They also suffered at the hands of hostile, nationalistic art critics who resented their presence in the Capital, garnering attention and dealers ready to promote these often revolutionary new styles of painting and sculpture. Today, the work is often taken for granted as the acceptable face of Modernism, but in the early part of the 20th-century, it was radical and daring.

The Louvre show marks the first time that many of these iconic artists have been shown in the middle east. The exhibition will no doubt have a profound impact on the local community of artists and enthusiasts in this culturally enlightened country.

Fauvism, Cubism, Surrealism, and Orphism are explored alongside the beginnings of non-objective paintings by Kupka and Delaunay. There are examples of works by Picasso, Gris and Braque exhibited side by side, allowing for comparisons between the different Cubist styles.

The show also has examples of sculpture by Modigliani (who began his career as a sculptor, not a painter) and Brancusi along with lesser-known names like Csaky, Zadkine, Archipenko, and Lipchitz.

Interestingly enough, the exhibition also has a section of contemporary photographs by Kertesz, Brassai, Krull, and Florence Henri, Marianne Breslauer and Ilse Bing which for the first time features woman photographers in context to the period.

This was my first visit to the Louvre Abu Dhabi, which opened its doors to the public in November 2017. The museum is housed in a spectacular building designed by the French architect Jean Nouvel with an intricate shade producing dome, covering the walkways leading to the exhibition spaces. You need it in soaring temperatures of 40º plus.

The museum also houses a rotating permanent collection that sets out to tell the story of art from the Neolithic period to the Modern movement allowing the viewer to gather knowledge of all-encompassing art from all ages.

My first thoughts were of how uncluttered and well lit the works of art appear in this state of the art museum. It is one of the most impressive new spaces I’ve had the opportunity to see and shows just what a seemingly unlimited budget can buy. I was thrilled to be welcomed by the Louvre team who have made every effort to bring great art to an audience both old and young. The museum is a catalyst for inclusivity merging great art from the west with important Islamic art from the middle east. This has created the perfect opportunity to bring both cultures together in an environment for learning and celebrating our cultures.

Louvre Abu Dhabi hours are: Saturday, Sunday, Tuesday, and Wednesday, 10 am–8 pm; Thursday and Friday, 10 am–10 pm. The museum is closed on Mondays.

A Family Weekend on 25-26 October will host fun activities inspired by the Cubist artworks displayed at the exhibition, providing children and families a chance to discover how modern artists used colours and shapes in paintings and explore the different art movements in Paris during the 1900s.

The cultural programme will be followed by an electro-night on 21 November from 10 pm – 2 am, with live sets from international DJs playing against the backdrop of cubism-inspired visuals, lighting the facades and the iconic dome of the museum. Featuring Amon Tobin and his Two Fingers DJ Set, Molecule Live and Boogie Box DJs, Hassan Alwan and Tristan Girault will perform in the open air. The event is in collaboration with the Institut Français in the UAE, cultural department of the French Embassy. Tickets are for 150 AED (including VAT) and are available online.

There will also be a series of filming screenings proposed by artist Hind Mezaina and a selection of films for children by Rinku Awtani.

To explore the exhibition, Louvre Abu Dhabi offers group guided tours and free mini tours through the exhibition as well as a multimedia guide available in Arabic, English, and French. A catalogue of the exhibition that includes reproduction of all the artworks with their presentation, curatorial text as well as we biographies of the artists is available for sale at the museum’s boutique.

The museum also offers free Exhibition Mini Tours each Sunday, Tuesday, Wednesday and Thursday at 2:30 pm and Friday and Saturday at 11:30 am and 2:30 pm.