Sculpture in the City, the annual public art programme set amongst well-known architectural landmarks, has launched, celebrating their ninth edition. Nineteen artworks make up this year’s outdoor sculpture park in the Square Mile, to include a new artwork by Jonathan Trayte to be unveiled in Autumn 2019.

The exhibition includes works from internationally renowned artists including Nathan Coley, Jennifer Steinkamp, Nina Saunders and Lawrence Weiner. The artworks are displayed next to some of the City’s most famous buildings, including 30 St Mary Axe (the Gherkin), The Leadenhall Building (the Cheesegrater), as well as new public spaces that have opened this year, including 70 St Mary Axe and Aldgate Square. 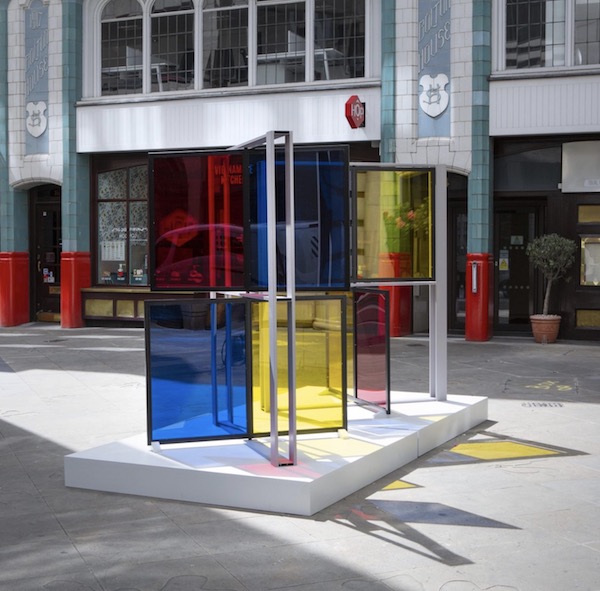 For Sculpture in the City’s ninth edition, the artworks are spread across the Sculpture in the City area (a triangle defined by Bishopsgate, Fenchurch Street and Bevis Marks), and range significantly in form, scale and medium. This year’s edition also sees works from the 8th edition remain on show including Do Ho Suh’s Bridging Home, London (2018) a co-commission by Art Night and Sculpture in the City, Nancy Rubins’ Crocodylus Philodendrus (2016-17), Clare Jarrett’s Sari Garden (2018), Juliana Cerqueira Leite’s Climb (2011) and Shaun C Badham’s I’M STAYING (2014).

Kevin Francis Gray presents Reclining Nude I (2016), which marks a turning point in his practice away from figuration and classicism. Situated in St Botolph’ s-without-Bishopsgate Churchyard, the work explores the materiality of marble and offers a fresh take on ancient stone-carving techniques. Further along, the road, Bridging Home, London (2018) Do Ho Suh’s site-specific installation, co-commissioned by Art Night and Sculpture in the City, is a replica of a traditional Korean house, his childhood home, which appears to have ‘fallen’ onto the Wormwood Street footbridge.

Stagnight (1985) by Michael Lyons is displayed on the corner of Bishopsgate and Wormwood Street. A fascinating sculpture developed from a drawing residency in Grizedale Forest (Cumbria, UK), Stagnight transforms the light and shade of the original drawings into the solid and void of the Sculpture; its configuration refers to animals, masks and cavorting forms. Leo Fitzmaurice presents Arcadia (2019) in three locations in the City of London: 99 Bishopsgate, Lime Street, and the Plaza outside of Fenchurch Street Station. Arcadia is a multi-part sculpture based on the conventions of UK public signage, exploring how these objects are designed to communicate within a given environment.

Adjacent to St Helen’s Churchyard, Nancy Rubins’ Crocodylius Philodendrus, (2016-17), a large-scale bouquet-like arrangement comprised of a wide range of animal forms in cast iron, bronze, brass and aluminium, remains on view. Across the street, Salvatore Arancio’s It Was Only a Matter of Time Before We Found the Pyramid and Forced it Open (2017) is presented at 1 Great St Helen’s. Created under the influence of hypnosis, Arancio’s work forms a sculptural garden of totemic clay sculptures that recall the petrified trees of the ‘Lava Trees State Park’ in Hawaii. Through the work, Arancio seeks to create a ‘healing area’ for visitors that aims to enhance their creativity.

ALL TOGETHER NOW (2019) by Lawrence Weiner is situated at The Leadenhall Building (the Cheesegrater). Inspired by the language and words written across public spaces in the South Bronx, Weiner’s work is reformed and informed by the location in which it is exhibited. Around the corner, Nina Saunders’ Abstract Mass (2008) is situated on Undershaft. By casting these discarded and second-hand armchairs in concrete, Saunders captures the original while playing light-heartedly on visitors’ expectations of comfort. Recreated in life-size, the work emphasises the vast scale of the surrounding buildings.

Patrick Tuttofuoco’s The Source (2017) a neon-light installation depicting the artist’s hands hangs in the historic Leadenhall Market. Shaun C Badham’s I’M STAYING (2014), a neon artwork remains from the 8th edition of Sculpture in the City just off the main atrium in Leadenhall Market, as a unique fit mirroring the historic market’s resilience over the centuries as the landscape around it has changed.

Just down the road, Botanic (2019) a video installation by Jennifer Steinkamp is on display at 120 Fenchurch Street. The work is displayed on the most substantial LED ceiling-mounted screen in Europe. Inspired by botanical gardens, Steinkamp’s work animates flowers by breaking them apart into a diaspora of seeds, twigs, leaves and petals and bringing them together again and again. Alongside these works, Nathan Coley presents The Same for Everyone (2017) near the Gherkin in Cunnard Place, a work from his important ongoing series of illuminated texts. In this series, Coley pairs provocative and ambiguous found phrases and the surroundings in which they are displayed to influence how viewers might understand the work. ​

Visitors will be able to see Juliana Cerqueira Leite’s three-metre-tall obelisk Climb (2012) in Mitre Square, a ‘pocket-park’ in the City which remains on display from last year. Around the corner, Jyll Bradley returns to Sculpture in the City for a second year running to display Dutch / Light (for Agneta Block) (2017) in Aldgate Square, a new public space in the heart of the City. Made from coloured sheets of edge-lit Plexiglas turned on their side and leant against a south-facing wall, Dutch / Light (for Agneta Block) creates an open-glasshouse pavilion that is activated by the sun. The work references the so-called ‘Dutch Light’ a horticultural revolution that hit British shores over three centuries ago as Dutch growers pioneered early glasshouse technology.

Sari Garden (2018) by Clare Jarrett, a work consisting of lengths of vibrant Indian sari material hanging between Victorian lampposts, remains from the 8th edition of Sculpture in the City in Heneage Lane. Situated in Bury Court, Reza Aramesh’s Site of the Fall – study of the Renaissance garden: Action 180: At 9:15 am Sunday 28 May 1967 (2016) is a larger than life hand-carved polished male body. From research on reportage images of the Vietnam War, a single composition was selected, the image of which has been reconstructed through a process of rendering based on live subjects.
Finally, in a newly-pedestrianised space outside 70 St Mary Axe, Elisa Artesero presents The Garden of Floating Words (2017) a neon poem that appears to float in the darkness from within the foliage of a garden space. During the daytime, the words are revealed to be on tall rectangular acrylic stands while at night, the words alone become the main feature.

Later in the Autumn, The Spectacle (2019), new artwork by Jonathan Trayte, will be revealed at 100 Bishopsgate. An ambitious site-specific installation that will comprise of seating, lighting and Sculpture. Situated in a busy thoroughfare for pedestrians, these striking visual devices will perform collectively as a meeting place, or somewhere to pause.

Further to the main programme, Sculpture in the City will once again be the associate programme partner with the Whitechapel Gallery for the second edition of Nocturnal Creatures, taking place on Saturday 20 July. Nocturnal Creature is a one-off event that brings together installations, artist performances, music, film and culinary experiences in the heart of the East End for a late-night contemporary arts festival.

For this year’s edition, Sculpture in the City will host Guillaume Vandame’s Notice Me (LGBTQIA+ Walk) and Graeme Miller’s On Air (2012) both social sculptures as well as a series of performances and tours led by Sculpture in the City artists including Reza Aramesh, Shaun C Badham, Marisa Ferreira, Leo Fitzmaurice, Clare Jarrett and Nina Saunders. Acclaimed street photographer Nick Turpin will document the evening and judge an Instagram-based street photography competition.

Notice Me (LGBTQIA+ Walk) is a participatory artwork led by Guillaume Vandame taking the form of a peaceful walk among LGBTQIA+ individuals of all ages and backgrounds as well as queer allies seeking to support the cause of equality and free love. Inviting participants to dress in one of the seven colours associated with the LGBTQIA+ community (red, orange, yellow, green, blue, purple, pink), the Walk will explore the Sculpture in the City area, highlighting the diversity of sculptures on display along the way.

Graeme Miller’s On Air is a broadcast work staged between an aerial vantage point and an audience at ground level. The landscape is translated into words by a duo of commentators and relayed to the remote audience, where an act of faith between the listeners and speakers ensues. A score of shifting grammatical tools reveal juxtaposition, synchronicity, action, space, the common and the unique. Each presentation is an unscripted and singularly composed response to its location. Visitors to Nocturnal Creatures are invited to listen to On Air at St Botolph’s without Aldgate.

This year’s edition will be dedicated to Michael Lyons (1943-2019), who was also one of the participating artists in the 6th edition of Sculpture in the City. Michael Lyons gained recognition in the 1960s when he was included in exhibitions such as the ICA’s ‘Young Contemporaries’ and the Whitworth’s ‘Northern Young Contemporaries.’ By the mid-1970s he was one of the finest steel sculptors of his generation exhibiting works at London’s Serpentine Gallery, Manchester’s Whitworth and York Sculpture Park. His Sculpture ranges from steel constructions, rooted in the tradition of Picasso, González and David Smith, to organic bronzes modelled on an intimate or monumental scale. Michael Lyon’s work is currently on display in a major retrospective, Michael Lyons: Ancient and Modern, at York Art Gallery until May 2020.

As a way of giving people greater access to Sculpture, Art UK will be adding artworks from the Sculpture in the City exhibition to Artuk.org, along with accompanying stories about the sculptures. The artworks will be added to the growing online sculpture catalogue as part of Art UK’s ongoing sculpture project– sitting alongside more permanently located public sculptures in London and across the UK.

Sculpture in the City has built a rapport with many who live and work in, as well as visit the City of London. Over the past nine years, Sculpture in the City has gained attention for bringing both established international artists and rising stars to the broader public’s attention. With works juxtaposed against the tall buildings in the Square Mile, this open-air exhibition not only enriches the workday experience of City workers but draws cultural visitors into this most ancient part of the City.

Gavin Turk says “Having been one of the artists in ‘Sculpture in the City’, it was fascinating to be part of the selection team this year, linking strong artworks to the sites and architecture of the City of London: a place that I have known intimately for the last 30 years – so I’m really looking forward to seeing all the work in place”