As a sculptor who has used Victorian and other found sculptures in my work for some time, the increasingly heated debate on the future of public Victorian statues, buildings and street names across the country has resonated with me. As a white British man, I am up there, on those plinths, but like the sometimes subversive approach taken with my own found sculptures, I can’t help but bristle positively with what might happen out of this extraordinary moment in time.

As historian and broadcaster David Olusoga noted this week: “The toppling of Edward Colston’s statue is not an attack on history. It is history.” (Guardian) We are undoubtedly witnessing a visceral subversion of sculpture’s archetypal solidity, as false heroes are being called into question, felled, or removed. It is equally reigniting conversations around what public statues and public sculpture have been, currently are, and should be.

From protests for the removal of Christopher Columbus in Boston, Robert E Lee in Virginia and the Robert Mulligan statue in East India Dock, London, the public have never been as engaged in issues of sculpture and monument in our public spaces. One only needs to cast one’s mind back in recent history too, to the striking with a metal stanchion of the Margaret Thatcher statue at the Guildhall in 2002 which caused a public furore equally from supporters, as well as detractors.

With all this in mind, this week’s events, whilst feeling familiar, somehow, right now, feel distinctly different.

Paul Carter Robinson, Editor of Artlyst, notes: “This question has surfaced time and time again as the debate rages to remove all public sculpture celebrating connections to imperialism and the slave trade. There is no doubt that the great British Empire was built off the back of slavery and exploitation, much of it connected to agriculture such as sugar, cotton, tea, cocoa, and tobacco. Plantations in the Americas, India, China, the Caribbean thrived due to forced labour built off the backs of slavery.”

My own perspective is that in toppling the Edward Colston statue in Bristol as with other sculptures, spaces are opening up for what I hope can be authentic conversations about race, art, culture and mutuality. I personally think authorities should act much sooner when works like these are contested, often for months, if not years before. Dialogue and action should always triumph over rebellion or violence. I also agree with many that keeping truth to history and educating future generations with it rather than erasing or rewriting it completely is necessary, be that on the streets or within a (certainly renewed) context of the museum.

This is a parallel I drew out within the title of my bronze work entitled ‘when history falls silent, the future will fail’ shown at the Guildhall, London in 2017. The work too sought to explore the fallibility of the heroic masculine. 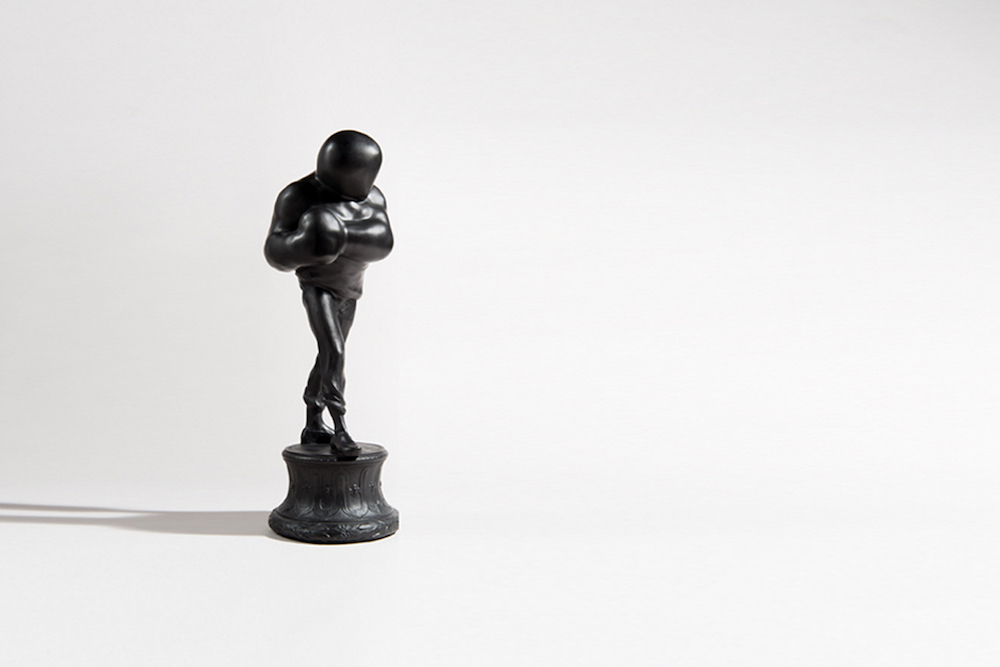 But the real questions are, what do we do with our recent history? And what should we do about our collective future?

With the focus on the removal of traditional public sculptures, London Curator, Aindrea Emelife is much more interested in the works that might take their place, citing a proposed and an actual work for our public spaces that sensitively deal with issues of race and gender: “Hew Locke’s ‘Restoration Series’ proposed in 2006 took the Colston statue with the intention of making the semi-invisible more visible because like magpies, we can be drawn to the glitter to understand the grit. His proposed covering of the statue with trinkets, beads and shells – the latter of which was used for trading slaves becomes heightened visually and viscerally, symbolic of the excesses of greed.”

Emelife goes on, “Equally powerful is the existing sculpture ‘Brick House’ by Simone Leigh currently installed on New York’s Highline which serves as a monumental, robust, resistant sculpture of an African-American woman, a beacon of hope in these troubling, turbulent times. As advocates for change, can we find energy in her presence? And isn’t that what public art’s all about, inspiration, hope, power and universal beauty that can reflect us all?” 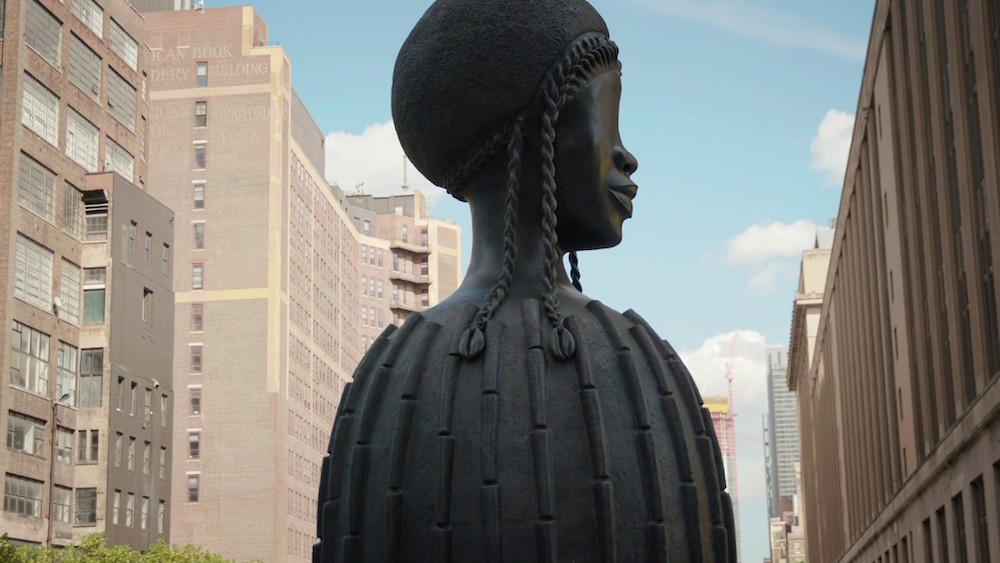 Caroline Worthington, Director of the Royal Society of Sculptors, is keen that everyone takes a role: “We welcome the current debates around public sculpture and art, which has been given new urgency by the Black Lives Matter protest, about how Britain’s past is commemorated through public art and who we choose to remember. Indeed, a previous member, John Cassidy, was the artist who made the statue of Edward Colston.

Worthington continues: “We believe that history should be explored and debated, but not forgotten. Public sculpture is a powerful way to reflect our rich and diverse cultural history. We urge those in decision making positions to think creatively and commission high quality and challenging work that highlights injustices and uncomfortable histories. There is danger in simply leaving an empty plinth that the moment for critical debate and reshaping our public spaces will pass.” 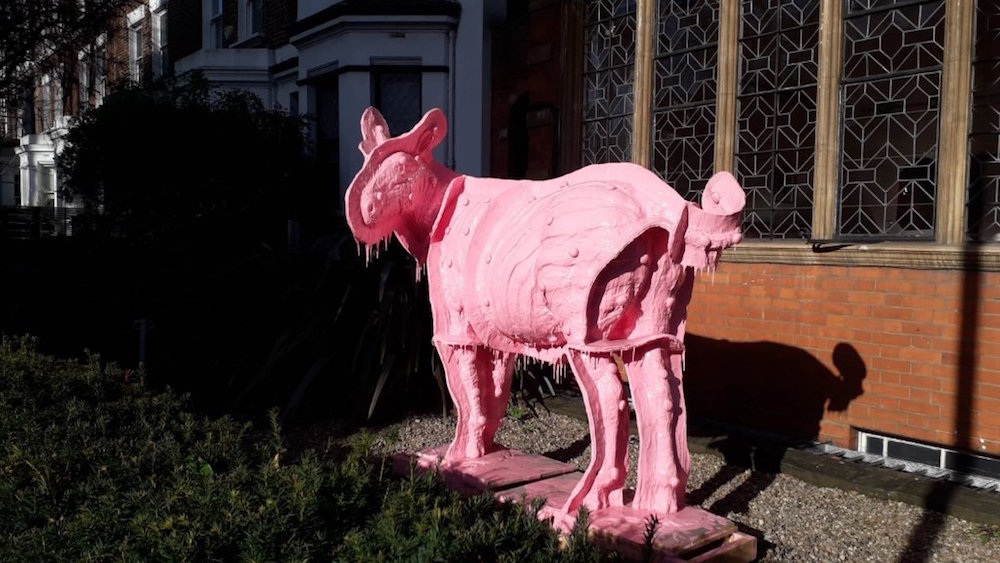 This surely brings us back to this moment, where we have the opportunity to strive towards a new unity in humanity, reflected in our public spaces. To find works that speak to time and place, yes, but recognise that this isn’t simply about taking people off and on plinths because of their achievements or because of their gender, race or sexuality. Perhaps we would do better in reaching for something beyond the literal that instead invites us to explore transcendence, something that can connect us timelessly, beyond our achievements, genders, race or sexuality and address the contemporary and future urgent issues that are facing us.

I cannot think of a more powerful work that transcends with these ideas than East Window at St Martin’s in the Field by Shirazeh Houshiary. This elegant, bold work for me is technical and conceptual perfection. It exists in that magical realm of confounding expectations, of what a public artwork might be, but equally, purposefully and meaningfully, reclaiming a space, all whilst going against the grain of patriarchy, not only in religion but in culture, history and society and how this has often been represented in the public space.

I was also moved by recent public work, a memorial plaque laid in Iceland to commemorate the loss of Okjokull, a glacier, with the words: “Ok is the first Icelandic glacier to lose its status as a glacier,” it continues:

“In the next 200 years, all our main glaciers are expected to follow the same path. This monument is to acknowledge that we know what is happening and what needs to be done.

Gestures like this are powerful; they resonate with urgency and meaning; they connect us equally. Sculpture can be as powerful too, in fact, it can be more potent if we come together and reconsider meaning and mutuality when we make decisions, especially about public statues and public art that will last well beyond our lifetimes.