Talk about the Bilbao effect!  Qatar Museums have announced the opening dates for the National Museum of Qatar (NMoQ), housed within a spectacular new building designed by architect Jean Nouvel, will open to the public on March 28, 2019, under the patronage of His Highness Sheikh Tamim bin Hamad bin Khalifa Al Thani.

To fuse these contrasting stories, I needed a symbolic element. Eventually, I remembered the phenomenon of the desert rose – Jean Nouvel

The immersive and experiential NMoQ tells the story of Qatar and its people from more than 700 million years ago through to today, giving voice to Qatar’s rich heritage and culture and expressing a vibrant community’s aspirations for the future. The new museum embraces, as its centrepiece, the restored historic Palace of Sheikh Abdullah bin Jassim Al Thani (1880-1957), son of the founder of modern Qatar: a building that in former times was both the home of the Royal Family and the seat of government, and was subsequently the site of the original National Museum. Jean Nouvel’s new 40,000-square-meter (430,000-square-foot) building incorporates the Palace while seamlessly integrating innovative artworks commissioned from Qatari and international artists, rare and precious objects, documentary materials, and interactive learning opportunities. 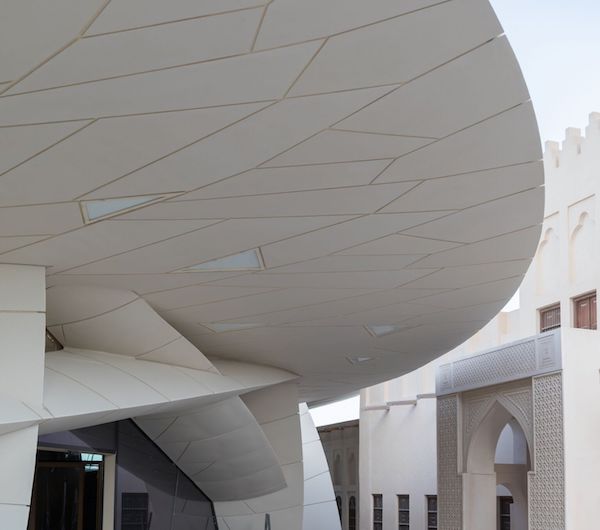 Her Excellency Sheikha Al Mayassa bint Hamad bin Khalifa Al Thani, Chairperson of Qatar Museums, said, “Qatar is an ancient land, rich in the traditions of the desert and the sea, but also a land that hosted many past civilisations. While it has modernised its infrastructure, it has still remained true to the core cultural values of our times. We look forward to sharing new museum experiences with our proud and diverse communities, as well as welcoming international guests in the spring of next year.”

Jean Nouvel’s dynamic architectural design echoes the geography of Qatar while evoking the history and culture of the nation. According to Nouvel, “Qatar has a deep rapport with the desert, with its flora and fauna, its nomadic people, its long traditions. To fuse these contrasting stories, I needed a symbolic element. Eventually, I remembered the phenomenon of the desert rose: crystalline forms, like miniature architectural events, that emerge from the ground through the work of wind, salt water, and sand. The museum that developed from this idea, with its great curved discs, intersections, and cantilevered angles, is a totality, at once architectural, spatial, and sensory.”

Sheikha Amna bint Abdulaziz bin Jassim Al Thani, Director of the National Museum of Qatar, said, “The National Museum will give visitors an unprecedented museum experience, with people at the heart of its vision and development—this is a museum that narrates the story of the people of Qatar and shares this story in an innovative, holistic, and immersive way. Central to the vision of the Museum is intergenerational learning, for school children, for adults, for all, through our multi-layered thematic exhibits, interactivity and programming. At the core of the museum’s permanent exhibits and accessible to the public is a digital archive of thousands of images, videos, and documents from Qatar and abroad. And all these elements will be made accessible to as many people as possible.”

The National Museum of Qatar is organised in three “chapters”—Beginnings, Life in Qatar, and Building the Nation—presented in eleven galleries. The visitor’s chronological journey, which extends through more than 2.7 km (1.7 miles) of experiences, starts in the geological period long before the peninsula was inhabited by humans and continues to the present day. The route passes through a succession of impressive, remarkably shaped volumes until it reaches its culmination in the very heart of Qatari national identity, the thoroughly restored Palace of Sheikh Abdullah.

Oral histories, archival images, artworks, music, storytelling, and evocative aromas create an immersive sensory experience that contextualizes the impressive array of archaeological and heritage objects, which includes the renowned Pearl Carpet of Baroda—commissioned in 1865, embroidered with more than 1.5 million of the highest quality Gulf pearls, and adorned with emeralds, diamonds, and sapphires—as well as manuscripts, documents, photographs, jewelry, and costumes.

Artworks commissioned for NMoQ include a piece by Qatari artist Ali Hassan in the ground-floor public entrance, a work by Qatari artist and arts patron Sheikh Hassan bin Mohammed bin Ali Al Thani at the entrance to the galleries, and a sculpture by Iraqi artist Ahmed Al Bahrani in the outdoor space known as the Howsh, or caravanserai. Commissioned artworks in the NMoQ park include a monumental installation by the French artist Jean-Michel Othoniel comprising 114 individual fountains set within the lagoon, with their streams designed to evoke the fluid forms of Arabic calligraphy, and a sculpture by the Syrian artist Simone Fattal, Gates of the Sea, which evokes the petroglyphs found in Qatar at Al Jassasiya.

Qatar Museums (QM) connects the museums, cultural institutions and heritage sites in Qatar and creates the conditions for them to thrive and flourish. It provides a comprehensive organisation for the development of museums and cultural projects, with a long-term ambition of creating a strong and sustainable cultural infrastructure for Qatar. Under the patronage of His Highness the Emir, Sheikh Tamim bin Hamad Al Thani, and led by its Chairperson, Her Excellency Sheikha Al Mayassa bint Hamad bin Khalifa Al Thani, QM is consolidating Qatar’s efforts to become a vibrant centre for the arts, culture and education, in the Middle East and beyond.

Since its foundation in 2005, QM has overseen the development of the Museum of Islamic Art (MIA), Mathaf: Arab Museum of Modern Art, and the Al Zubarah World Heritage Site Visitor Centre. QM also manages the ALRIWAQ DOHA Exhibition Space and the Fire Station: Artists in Residence. Future projects include the launch of the highly anticipated National Museum of Qatar and the 3-2-1 Qatar Olympic and Sports Museum.

QM is committed to instigating Qatar’s future generation of arts, heritage and museum professionals. At its core is a commitment to nurturing artistic talent, creating opportunities and developing the skills to service Qatar’s emerging art economy. Utilising a multi-faceted program and public art initiatives, QM seeks to push the boundaries of the traditional museum model, and create cultural experiences that spill out onto the streets and seek to involve a wide audience. Through a strong emphasis on originating art and culture from within and fostering a spirit of national participation, QM is helping Qatar find its own distinctive voice in today’s global cultural debates.