A valuable pastel on canvas by the French Impressionist artist Edgar Degas titled Les Choristes/The Chorus  stolen from a Marseille museum in 2009, has been discovered on a bus close to Paris. It was found during a random search, according to officials.

The French authorities found the artwork in the luggage compartment of a bus that had stopped in a motorway service station. Experts confirmed the painting, said to be worth 800,000 euros (£700,000) was authentic. Customs officials discovered it inside a suitcase. None of the passengers have claimed ownership of the bag containing the work of art and no one has been arrested.

The pastel which dates from 1877, disappeared from Marseille’s Musée Cantini. It had been on loan from the Musée d’Orsay in Paris. Authorities at the time said there was no sign of a break in. The painting depicts a backstage view of the opera ‘La Traviata’ by Giuseppe Verdi.

Hilaire-Germain-Edgar Degas (1834-1917) is best known for his works depicting horse racing, laundresses, bathing nudes and above all for his ballet dancers. Degas was preoccupation with rendering the movement of the dance. He was born in Paris, France, the eldest of five children of Célestine Musson De Gas and Augustin De Gas, a banker. The family was moderately wealthy. His mother died when Degas was thirteen, after which his father and grandfather were the main influences on his early life. At age eleven, Degas (in adulthood he abandoned the more pretentious spelling of the family name) began his schooling with enrollment in the Lycée Louis-le-Grand, graduating in 1853 with a baccalauréat in literature.Degas had shifted from his initial forays into history painting to an original observation of contemporary life. Racecourse scenes provided an opportunity to depict horses and their riders in a modern context. He began to paint women at work, milliners and laundresses. Mlle. Fiocre in the Ballet La Source, exhibited in the Salon of 1868, was his first major work to introduce a subject with which he would become especially identified, dancers. 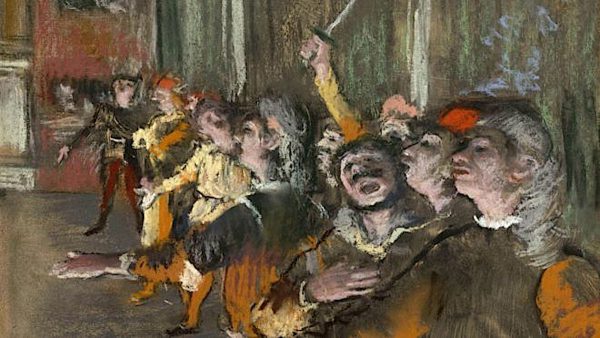 In many subsequent paintings dancers were shown backstage or in rehearsal, emphasizing their status as professionals doing a job. From 1870 Degas increasingly painted ballet subjects, partly because they sold well and provided him with needed income after his brother’s debts had left the family bankrupt. Degas began to paint café life as well, in works such as L’Absinthe and Singer with a Glove. His paintings often hinted at narrative content in a way that was highly ambiguous

Degas was one of the greatest artistic innovators of his age. He turned from the traditional subjects and technical conventions of his training to find new ways to depict modern, urban life. In Degas’s work, both the highs and lows of Parisian life are depicted: from scenes of elegant spectators and jockeys at the racecourse, to tired young women ironing in subterranean workshops. Among Degas’s many contributions to the development of art was a relentless technical experimentation with materials, particularly with the supremely flexible medium of pastel that he came to prefer over painting in oil. The range of materials and the cross-fertilization of effects and techniques he used helped him develop a remarkably distinctive and deeply personal vision. Degas’s interest in Japanese prints, photography, and ancient classical friezes probably informed his innovative approach to composition.

Pastel became increasingly important to Degas in his later years at a time when, coincidentally, brilliant colour began to play an essential role in the contemporary art he admired, and his own eyesight started to fail. The tactile immediacy and luminous colours of pastel, as well as its ephemeral and fragile quality, allowed him to create astonishingly bold and dynamic works of art, distinct from those of his fellow Impressionists.