From a critic’s point of view, It is pretty difficult to sum up the year 2019. It was for example, a year when greater and greater emphasis was placed on doing full justice to women artists. The two London Tate’s seemed particularly anxious to do this. Yet, in my view, the two most important solo retrospectives of work by women did not find homes at the Tate. One at Gateshead was a survey devoted to the career of the pioneer feminist Judy Chicago. Chicago has for some years now been triumphant in her native United States, but this was the first really comprehensive showing of her work, here in Britain. The other show was a major survey of the career of Bridget Riley, at the Hayward Gallery on the South Bank. Riley lives in Britain and her work is familiar here. Like Judy Chicago, she is pretty senior. Both women are now in their eighties.

Where major historical surveys were concerned, the palm went to two archaeological shows. One was the Assyrian exhibition at the British Museum, based very much on the BM’s own holdings of Assyrian art, much of which is not usually on view. It depicted a brutal military culture that it is difficult for us, in these squeamish days, to admire, but one which is brilliantly illustrated in an extensive series of sophisticated low reliefs from the palace of Ashurbanipal, one of the most renowned of Assyrian monarchs. Had these remained in situ in Iraq, instead of being carried away by Victorian explorers, it seems pretty clear that the Islamist regime now in power there would have destroyed them. The remains of Nineveh have been flattened.

The other major archaeological show was the one devoted to the 18th dynasty Egyptian pharaoh Tutankhamun, currently on view at the Saatchi Gallery near Sloane Square. This is a touring show, designed to raise funds for a new museum in Egypt. Though it necessarily omits certain totem objects, such as the gold mask found on Tutankhamun’s mummy, it gives a good idea of the wealth and sophistication of Egyptian culture at this remote period. King Tut was not, in fact, a big deal in his day. He reigned from the age of nine to that of nineteen, at the very tail end of the dynasty to which he belonged, and it was his obscurity that preserved his tomb more or less intact when the tombs of grander Egyptian monarchs were plundered. The exquisite sophistication of the objects that were recovered when the tomb was discovered in the 1920s has paradoxically made Tut the most famous of all Ancient Egyptian monarchs. I gather that the exhibition is now jammed with admirers – I was lucky to be able to wander around it at a press view.

Also jammed is the show of work by William Blake at Tate Britain, on view until February 4th 2020. Tate Britain, on its website, invites you to “experience Blake’s visionary art in his largest show in a generation”. The show is well and logically laid out and gives an excellent idea of Blake’s genius. The problem is that, while Blake had great ambitions, he worked on a small scale – of necessity not from choice. The exhibition does its best to make up for this, both by recreating the small room which contained the only monographic exhibition of Blake’s work held during the artist’s lifetime, and by using today’s digital technology to recreate Blake’s unfulfilled dream of seeing his work on an enormous, Michelangel-esque scale. In addition, Blake’s Ancient of Days was projected on to the dome of nearby St Paul’s from November 28th to December 1st.

At Tate Britain, there was, from March to August 2019 a show of portraits by that ever-favourite Post-Impressionist Vincent Van Gogh. Van Gogh, in his young manhood, lived in Britain for a few years, but this was before he decided to become an artist. The exhibition, somewhat awkwardly, tried to prove that this British experience was crucial to Van Gogh’s later career, but on the whole, failed to do so. It also demonstrated that the British painters whom Van Gogh influenced were nothing like as good as he was. 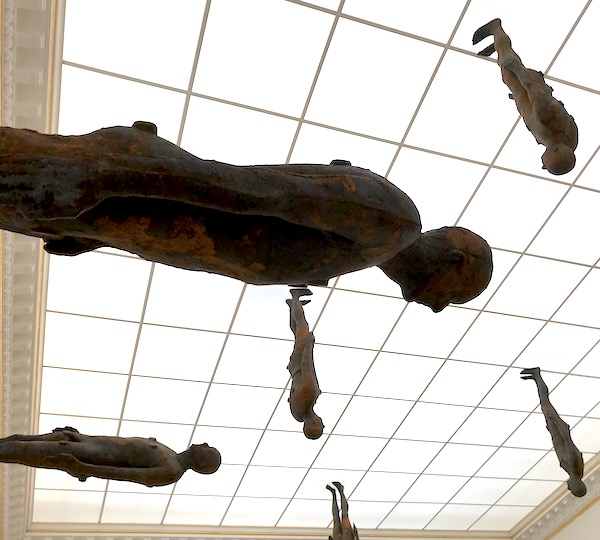 A similar failure of curatorial ambition characterised the otherwise rather good retrospective devoted to the Pre-Raphaelite Movement at the National Portrait Gallery. The aim here was to prove that the women associated with Pre-Raphaelitism played a significant part in its development. In attempting to do so, the show more or less fell flat on its face. Women were important to the movement as muses, helpmeets and victims, but not as creative artists, and certainly not as being in any sense leaders of the school. What remained from this failed attempt was, however a credible survey, though one which rather missed out on two things. One, that early Pre-Raphaelitism, deliberately archaic, was very different from its later version in the hands of still under-rated Burne-Jones. The other was that this later version influenced the European Symbolist Movement and even the Blue Period work of Picasso. It was the herald of things to come, not just a nostalgic reversion to the past. In those days contemporary British art really counted for something internationally – more so, I think, than it does now.

A Tate exhibition earlier in the year, devoted to Burne-Jones alone, demonstrated the same timidity of approach, making no attempt to place the artist in his European context, and making no mention of his widespread influence abroad. It got rather a condescending review from The Guardian.

The cult of ‘immersive’ exhibitions – go there, wander around, and fall over it – was represented in the 2019 exhibition calendar in a number of enterprises. The most ambitious event of this sort was the Tate Modern exhibition devoted to work by the Icelandic artist Olafur Eliasson. This closes on January 2nd. It is very comprehensive, embracing all kinds of physical experiences – even what is or was provided by the museum’s catering. Not, as it happens, quite comprehensive enough. There was a public outcry from a disabled visitor, who discovered that part of it was impassable for her wheelchair.

She might have she chosen to go there, have made the same complaint about the just closed solo show of work by Anthony Gormley at the Royal Academy. This featured a room which resembled a dried-out swimming pool (look at it only from the edge) and another gallery that was a tangle pf metal rods that only the most lissom of visitors – certainly not me – could penetrate it. The most impressive space offered figures – mostly moulds made from the artist’s own body – that not only stood or lay on the floor, but which in addition projected horizontally from the walls, and hung head down from the ceiling. ‘L’art,’ this assemblage declared, ‘c’est moi!’.

Gormley wasn’t by any means the only artist intent on making this declaration in the exhibitions I saw in 2019, but his voice was one of the loudest.