Michael Armitage was born in 1984 in Nairobi, Kenya. He works between Nairobi and London. He received his BA in Fine Art from the Slade School of Fine Art, London (2007) and has a Postgraduate Diploma from the Royal Academy Schools, London (2010).

In September 2020, Armitage opened a solo exhibition, Paradise Edict, at the Haus der Kunst, Munich, toured to the Royal Academy of Arts, London, in May 2021. The exhibition included a collaborative project with the Nairobi Contemporary Art Institute, a non-profit platform that Armitage is developing with Ayako Bertolli’s director. While in Germany, Armitage was awarded the 6th Ruth Baumgarte Art Award.

Peter Barber studied at the University of Sheffield between 1980 and 1983 and the Central London Polytechnic from 1984 to 1986. Peter worked with Richard Rogers, Will Alsop and Jestico+Whiles before establishing his practice in 1989. He is currently a lecturer and reader in architecture at the University in Westminster.

Over the last 30 years, Peter has designed a significant number of award-winning housing projects. Peter was awarded the Royal Academy Grand Prize for Architecture in 2015 and numerous RIBA and Housing Design Awards. In addition, Peter was awarded an OBE for services to architecture in the Queen’s Honours List 2021, the AJ100 Contribution to the Profession Award 2021 and the RIBA Neave Brown Award for Housing.

He has lectured about the work of the practice at many institutions, including the Royal Institute of British Architects, the Architectural League in New York, and numerous international and domestic university schools of architecture, including Helsinki, Pretoria, Ahmedabad, Mumbai, Munich, Genoa Istanbul and Colombo as well as Oxford University and The Bartlett – University College London. In 2019 his work was the subject of a major retrospective exhibition entitled “100 Mile City and Other Stories” at the London Design Museum. The Independent has described him as one of the UK’s leading urbanists.

Ryan Gander is an artist living and working in Suffolk, UK. Over the past two decades, Gander has established an international reputation through a vast and pluralistic body of artworks that materialize in many different forms, ranging from Sculpture, apparel and writing to architecture, painting, typefaces, publications and performance. As well as curating exhibitions, he is a committed educator, having taught at international art institutions and universities, and has written and edited a variety of books and presented television programmes on and about contemporary art and culture for the BBC.

Gander is typically described as a conceptual artist, but this is a term he has refuted, referring instead to himself as a sort of neo-conceptual no-style-style amateur philosopher’. Through associative thought processes that connect the every day and the esoteric, the overlooked and the commonplace, Gander’s work involves questioning language and knowledge, a reinvention of the modes of appearance and creation of an artwork. His work can be reminiscent of a puzzle, a network with multiple connections, the fragments of an embedded story, a vast set of hidden clues to be deciphered, encouraging viewers to make their connections and invent their narrative to solve the charade with its many solutions, staged by the artist.

Gander studied at Manchester Metropolitan University, UK, the Rijksakademie van Beeldende Kunsten, Amsterdam, NL and the Jan van Eyck Akademie, Maastricht, NL. The artist has been a Professor of Visual Art at the University of Huddersfield and holds an honorary Doctor of the Arts at the Manchester Metropolitan University and Suffolk. In 2017 he was awarded an OBE for services to contemporary arts. In 2019 he was awarded the Hodder Fellowship at Princeton University.

For decades, a long-overlooked painting regarded as the work of Sandro Botticelli’s studio assistants has sold at Sotheby’s in New York for $45.4 million with commissions.

Billed as a “seminal masterpiece” by the Italian Renaissance artist, the tempera-on-panel titled “The Man of Sorrows” is a half-length portrait of the resurrected Christ. The painting was the outstanding lot in a sale of 55 old master paintings and Sculptures.

One of the last great masterpieces remaining in private hands by renowned Renaissance artist Sandro Botticelli will star in Sotheby’s annual Masters Week sales series in New York in January 2022 with an estimate in excess of $40 million. Executed in the late 15th/early 16th century, The Man of Sorrows is a masterful late-period work by the artist when the fanatical Dominican friar greatly influenced Botticelli Girolamo Savonarola adopted a style characterized by Christian symbolism and visionary spirituality. The portrait of the resurrected Christ reveals an essential coda to Botticelli’s well-known earlier career while also encapsulating the artist’s singular style with a stunningly modern and human portrayal of Christ. 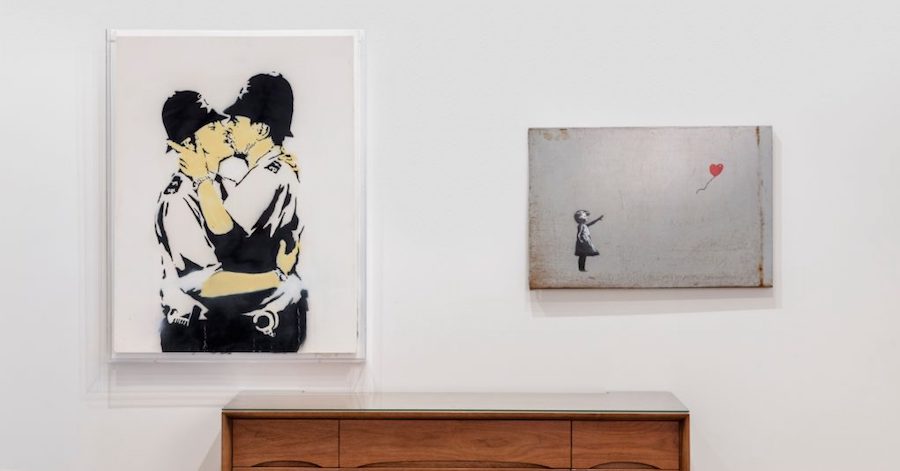 Sotheby’s is selling three works by Banksy from the collection of 1990s’ pop star’ Robbie William. The three works include one of several Girl with A Balloon. A painting which has in the past achieved millions. His Vandalized Oils series (Choppers) and Kissing Coppers, which originally appeared on a Brighton pub wall in 2004, are also up for grabs. The reclusive street artist will not make a penny from the estimated £10 million hoard, with bidders expected worldwide.

All three paintings are renditions of works first seen on the streets around the UK. For example, vandalized Oils (Choppers) was first seen as a sprayed mural in Whitecross Street Market in the east end. The work is accompanied by a Pest Control Certificate of Authenticity.