The British artist Tom Phillips RA has died. Phillips was born in London in 1937. He attended St Catherine’s College, Oxford, in 1957, where he read English.

His gallery, Flowers has written, “Phillips attended drawing classes and lectures on Renaissance iconography at Ruskin alongside his studies in English at St Catherine’s College, Oxford. Taught by Frank Auerbach in 1961 at Camberwell School of Art, Phillips’s first solo exhibition in London was in 1965 at the Artists International Association Gallery, followed by an exhibition with Angela Flowers in 1970. Phillips taught at Bath Academy of Art, Ipswich and Wolverhampton Art College between 1965 and 1972, and in 1969 he won the John Moores Prize. In the late 1960s, Phillips was possibly better known for his music activities (both classical and with Cornelius Cardew’s Scratch Orchestra), including his compositions, as performed by the pianist John Tilbury.” 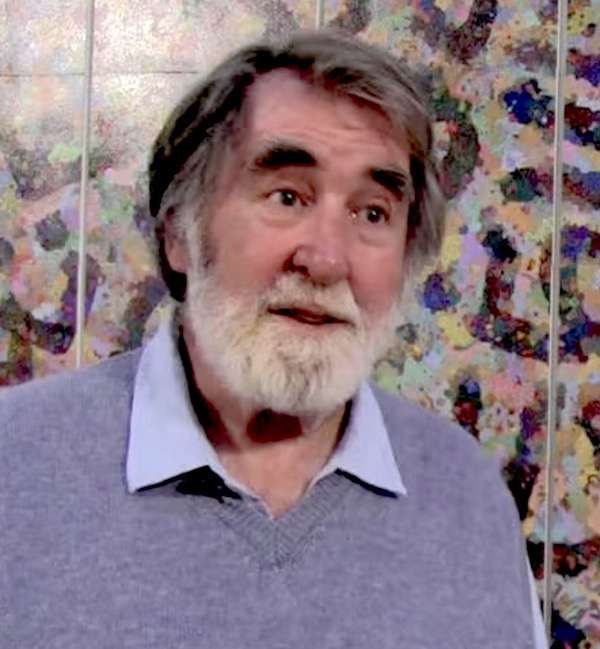 In 1966 Phillips resolved to dedicate himself to making art out of the first secondhand book he could find for threepence on Peckham Rye. Thus began A Humument, the longest of Phillips’s extended serial projects. A Humument is a radical ‘treatment’ of a forgotten Victorian novel utilizing collage, cut-up ornament and other techniques, creating new works of art and poetic text from the original pages. On the fiftieth anniversary of its inception in 2016, Phillips completed the sixth and final version of this work – each version with successively more pages reworked until his original work had been completely transformed.

A Humument was a long-standing and continually evolving artistic work which Phillips  revised and revisited over many years. After stating to a friend that the first book he could find for threepence would form the basis of a long-term project, he came across the obscure Victorian novel A Human Document by W.H. Mallock in a Peckham Rye junkshop. Inspired by John Cage and William Burroughs’s experiments with chance and cut-up, Phillips then embarked on a reworking of this source material, creating an entirely new version of the original text. By deconstructing the text by obscuring most of the words on the original page and leaving only a few carefully selected words visible, this new ‘treated’ novel can still be read as a narrative but each page can also be read as an individual poem and a piece of visual art.

Phillips worked on the project for most of his life and ended on the fifth print edition of A Humument, reworking a selection of around 50 pages for each new edition. Developments in artistic techniques are apparent throughout the different editions – early editions mainly featured simple geometric patterns with hints of colour but later editions of the text see a more developed, complex style emerging  – employing photomontage, intricate illustration and collage on the original pages. Developments in language have also allowed for new meanings to be drawn out of the original Victorian text, with later editions including references to modern technology such as texting and apps, as well as references to contemporary events such as 9/11. Phillips had accumulated many copies of the original Victorian novel, which were often sent to him by well-wishers. He has stated that A Humument was only to be completed once he has reworked all of the pages twice and been through six cycles of the project.

Phillips received many commissions for site-specific artworks, including tapestries for St Catherine’s, Oxford, sculpture for the Imperial War Museum, street mosaics for his native Peckham, and ornament and memorials for sacred spaces, including both Westminster Cathedral and Westminster Abbey. Phillips’s portrait subjects have included Samuel Beckett and friends such as Iris Murdoch, Sir Harrison Birtwistle, Richard Morphet, and the Monty Python team.

In 1989, he became the second artist to have a retrospective of his portraits at the National Portrait Gallery. Fifteen years later, he also curated We Are The People, an exhibition at the NPG of his extensive collection of postcard photographic portraits. Phillips received the Frances Williams Memorial Prize in 1983 for his illustration and the new translation of Dante’s Inferno. He also made a TV version of the Inferno with Peter Greenaway, which won them jointly as directors the Italia prize.

Elected to the Royal Academy in 1984, Phillips went on to chair the Academy’s Library and its Exhibition Committee from 1995 to 2007; He curated the RA’s exhibition Africa: The Art of a Continent (1995), which travelled to the Martin Gropius Bau, Berlin and the Guggenheim, New York.

Serving as a trustee for the National Portrait Gallery and British Museum, Phillips was made a Commander of the British Empire for services to the Arts in 2002. In 2005, he was appointed Slade Professor of Fine Art at the University of Oxford. Between 2005 and 2011, he was invited as an annual Director’s Visitor to the Institute for Advanced Study in Princeton.

Oxford’s Bodleian Library took over Tom Phillips’s archive, and he published his postcard collection in a series of books with them. Phillips’s collaboration with Tarik O’Regan on an operatic version of Conrad’s Heart of Darkness, for which he provided the libretto, was premiered at the Royal Opera House’s Linbury Theatre at the end of 2011.”