The latest in an excellent series of significant exhibitions at the British Museum – much better than the smaller ones the B.M. does in the cramped spaces of what used to be the reading rooms of the British Library – is about the legendary city of Troy, long besieged and finally at last taken and destroyed by a coalition of Greek states.

Basically, though there has certainly been a lot of art inspired by the story of Troy – the siege and what happened after it – the relics from the site itself, at long last, discovered and excavated by the buccaneering German archaeologist Heinrich Schliemann, are less impressive than one might like. A group of gold objects, perhaps of not quite the same date as the legendary siege, discovered by Schliemann in the course of his excavations, were removed during the closing days of World War II from the German museum to which Schliemann had presented them. These are now locked away in Moscow and St Petersburg and are represented here at the B.M. by modern replicas, which inevitably fail to excite the imagination in quite the same fashion. Old gold is better than new. 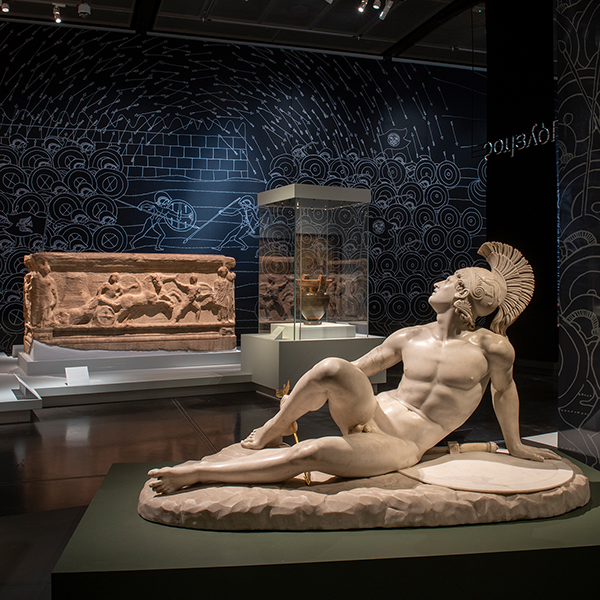 What remains are the works of art inspired by three great poetic narratives, two in Greek, and one in Latin. There were other narratives as well, but these have survived only in fragments. The three narratives concerned are the Iliad and the Odyssey, both by Homer, and Virgil’s Aeneid. The Iliad is the one that focuses directly on the closing phase of the siege. The Odyssey tells the story of the long road home followed by Odysseus, one of the Greek commanders. The Aeneid is about the post-siege wanderings of Aeneas, a Trojan survivor, who ended his travels in Italy and became the founder of what became the Roman state, though not of the city of Roman itself. Both the Odyssey and the Aeneid contain many episodes that are obviously legendary. The Iliad gives the impression of having a core of truth. Though gods and goddesses intervene in the narrative, the heroes on both sides of the conflict are recognisably human, with human faults as well as human virtues. Women also figure, but mostly either as victims or as goddesses. The latter are, of course, impervious to the risks of mortality.

These three narratives have resonated, to varying degrees, throughout the whole history of Western culture, and sometimes in other cultures as well. The Arabs who conquered Constantinople, and put an end to the Byzantine Empire, saw themselves as the heirs of Troy, which is situated just on the other side of the Dardanelles.

What the show now at the British Museum does is to show how the three Troy stories develop in Western art, to the point of being, in a sense, competitors with the Christian narrative that for so long dominated Western painting and sculpture. There is an array of Geek and Greco-Roman narrative reliefs, featuring different aspects of the three underlying narratives. And, manifesting themselves again after a hiatus after the fall of Rome, there is the way in which the three narratives once again took hold of the Western imagination. This hold only started to falter in the 20th century, despite the impact made by Schliemann’s excavations, which served to establish a very possible factual basis for events that some 19th-century scholars had deemed to be purely fictional.

The few absolutely contemporary artworks included, one at the beginning and the other at the very end of the show, are abstract gestures that don’t seize the imagination in the same direct fashion as the narrative images that form the bulk of what is on view, entirely out-competing the group of not very distinguished examples of pottery and other bits-and-pieces from the now-rediscovered site of Troy itself. Perhaps the fabled city is at long last losing its grip on our imaginations. Or maybe – just maybe – this show will help to revive it.