It’s become as much a part of the early autumn ritual as fallen leaves and conkers in the park or early Christmas cards in the department stores. We know it’s late September because the Turner Prize is with us again. This year it’s being presented in the Ferens Art Gallery, Hull, which is the 2017 city of culture. Established in 1984 the prize has been through a number of incarnations. Originally held in London it has, in recent years, moved around the provinces from Liverpool to Gateshead, from Derry to Glasgow. Until 2017 only artists under 50 were eligible. Now you can be a pensioner. The Stuckists, the old fogies of the art world, had their day in the sun protesting most of what was on show wasn’t ‘real’ art. Many who’ve won, like Grayson Perry, have gone on to become household names. Other winners have dissolved back into obscurity. Yet, still, the Prize has managed to evolve and survive for the best part of 30 years.

It’s a contentious idea to have a winner of creativity. As if the imagination might be measured like a pound of feathers or the annual GDP

We are awash with prizes across the arts. From the Man Booker, to the National Poetry Competition, from the John Moores to the Jerwood Drawing Prize. There are probably also copious music prizes and dance prizes that I know nothing about. And yet does this hunger for X-Factor style winners and losers really make any sense? If there’d been a Turner Prize in late 20th century Paris who would have won? Picasso or Braque? And would the runner up have been seen as an also-ran, one who slipped from view into the murky shallows of art history? It’s worth asking what these prizes are really measuring? It’s like comparing sardines with toffee apples. You wouldn’t want either of them all the time. But each has their value. How can a film be better than a painting, a video than an installation?

But we live in a consumerist age. Competitions provide razzmatazz and bruhaha that have little to do with the winner being the ‘best’. The public (and much of the art world) rely on the seal of approval that a prize bestows to know who to watch, which horse (so to speak) to put their money on. Having said that, it is an improvement that the proceedings now take place in different cities and that the event isn’t so metropolitan centric. And, probably, it’s a good thing that it’s open to older artists. But in the end what’s being judged is never quite clear, even though the official line it that it’s ‘a prize awarded to British artists and artists based in Britain for outstanding exhibitions and projects presented over the past year…[that] bring new developments in contemporary art to a wider public and…encourage debate around art made today’.

In previous years the Turner has relied heavily on irony and shock value, whether it was Martin Creed’s lights going on and off or Simon Starling’s Shedboatshed. This year it is distinctly more restrained, as if the world has become a more serious and less playful place. It’s also sited sensitively within the gallery so that it doesn’t deny the permanent collection but rather sets up a debate with it. The centre court acts as a nexus where films of the artists talking about their work greet the visitors and viewers can respond and leave comments. 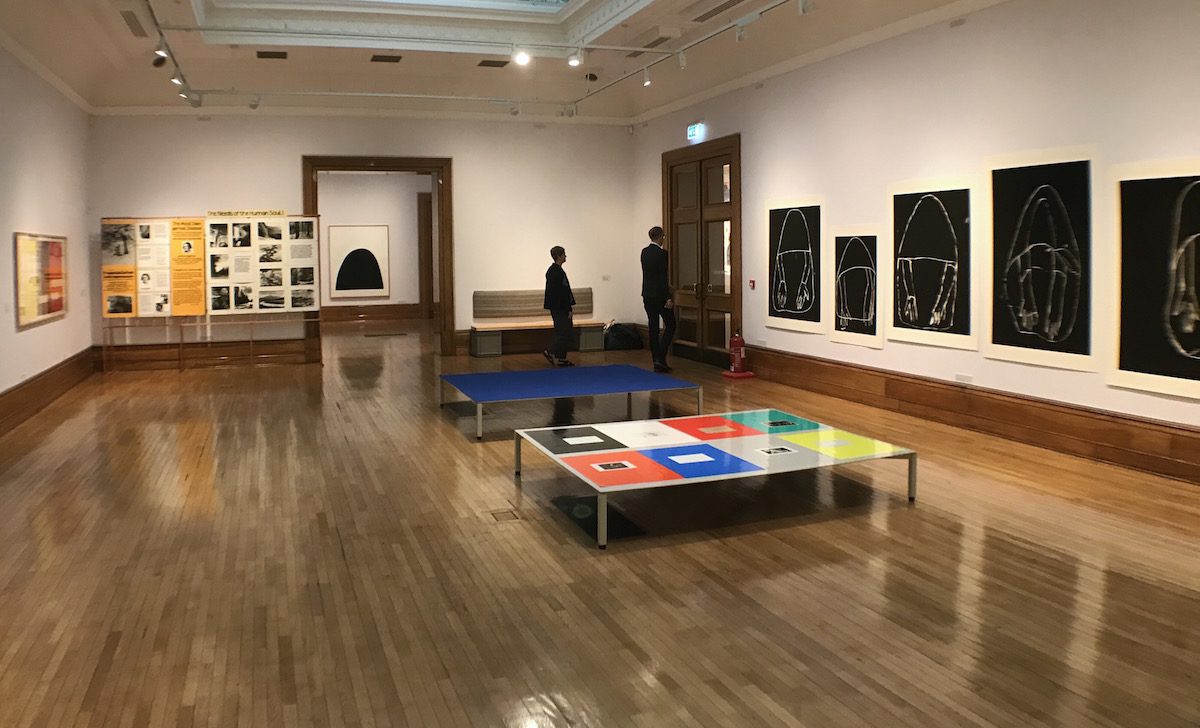 Andrea Büttner was born in Stutgart in 1972 and lives and works in London and Berlin, where she attended the Royal College. Hers is the most conceptual offering. In varying media, including woodblock prints, etching and paintings she engages with ideas around fine art, craft and design. There’s an unashamed moral component to her work which explores attitudes to poverty, value and shame. Most potent is Beggar 2016, based on the German artist Ernst Barlach’s bronze sculpture Verhüllte Bettlerin (Cloacked Beggarwoman) 1991, an anonymous archetypal image of poverty reworked for the present day. Whilst there are probably too many ideas here for any single one to come across with real clarity it’s refreshing to see an artist unapologetically trying to get to grips with spirituality and social injustice. As part of her engagement with this subject she’s borrowed from the Peace Library/Anti-War Museum of the Protestant Church in Berlin a mobile exhibition that reveals, in texts and black and white photographs, the work of the pacifist and political activist Simone Weil (1909-43). 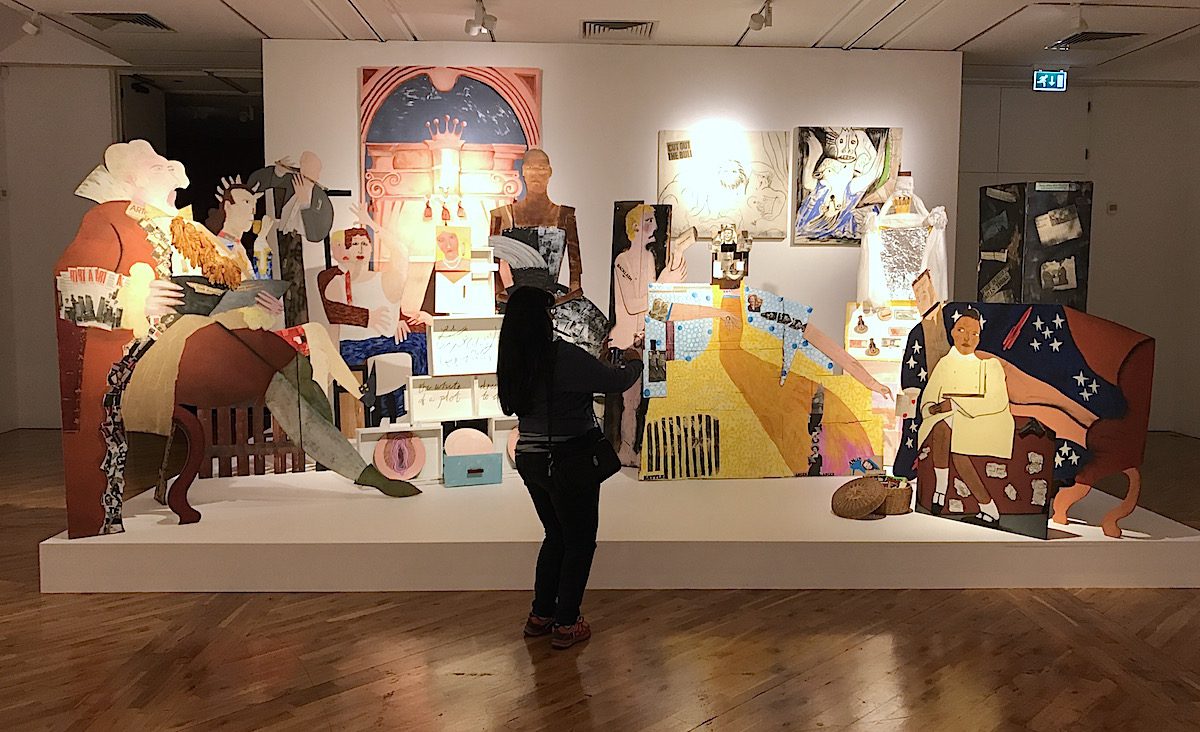 Politics very much informs the work of the oldest nominee Lubaina Himid whose earliest work, here, dates back to 1986. For the Turner Prize she presents pieces that include painting on the Guardian newspaper in order to draw attention to and reinterpret found texts, painting on found ceramics, as well as a mise en scene and a painting on canvas. An educator, artist and organiser she has, in her set piece The Fashionable Marriage, reinterpreted Hogarth’s 1743-4 Marriage à la Mode to highlight the use of people of colour within historical painting. Using her training as a stage designer she’s created a scenario that with wit and verve addresses black experience. 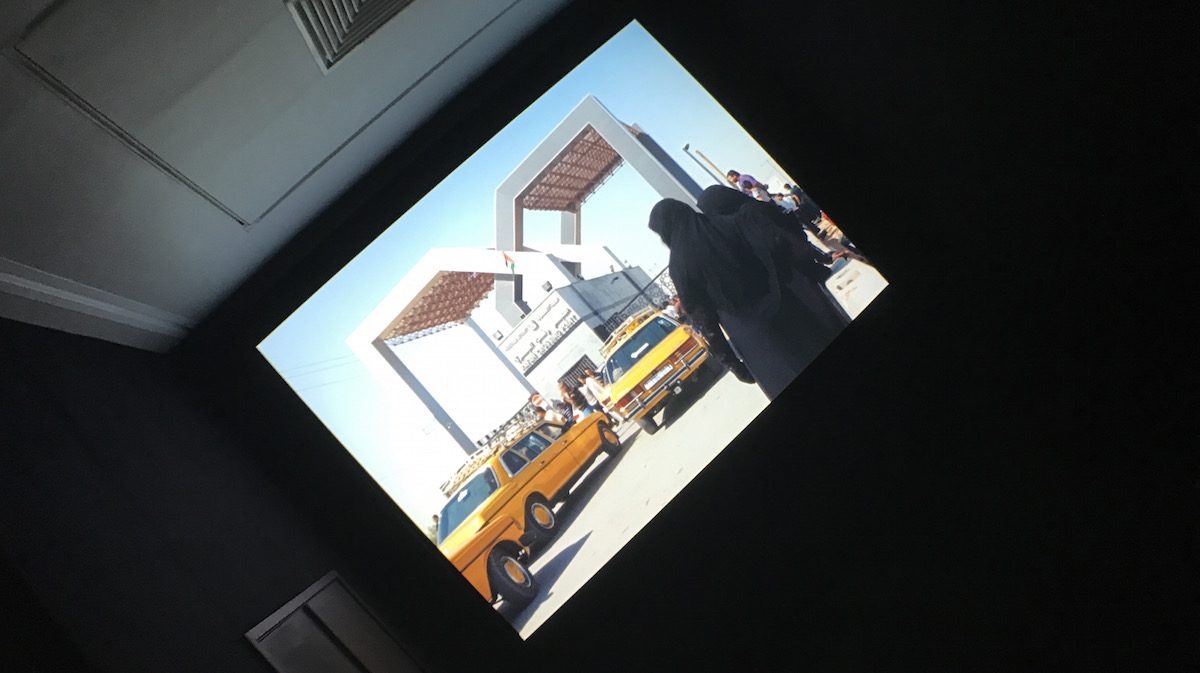 Rosalind Nashashibi has included two films and the gallery has been set up as a two-screen cinema. Part documentary and part staged, they portray worlds that are closed, communities that are hidden in ways that are poetic and often lyrical, despite the resistance to a linear narrative. In Electrical Gaza, 2015 she explores the relationship between the personal and the state. Filmed in 2014 in the Gaza Strip just before Israel’s last war, Nashashibi was unable to complete her filming, which has been done with blocks of animation.  As we travel through the streets of Gaza, past the graffiti covered walls and shops selling flamboyant wedding dresses, there’s a strong sense of the uncertainty and fragility that dominate the lives we see. There are some wonderful shots of horses being led into the sea to cool down and a sense of the claustrophobic political calamity that is Gaza. But the piece is, perhaps, rather too long, neither quite feature film nor art work. Alongside this is Vivian’s Garden, a study of the close, yet slightly odd, relationship between the painter Vivian Suter born in 1949 and her mother Elizabeth Wild, a wheel-chair bound artist and Austrian émigré in her nineties. Filmed in a tangled Rousseau-like garden of burgeoning ferns and succulents that is shared with a large number of dogs, Nashashibi shows their claustrophobic, self-contained world where the women are waited on by native female retainers. 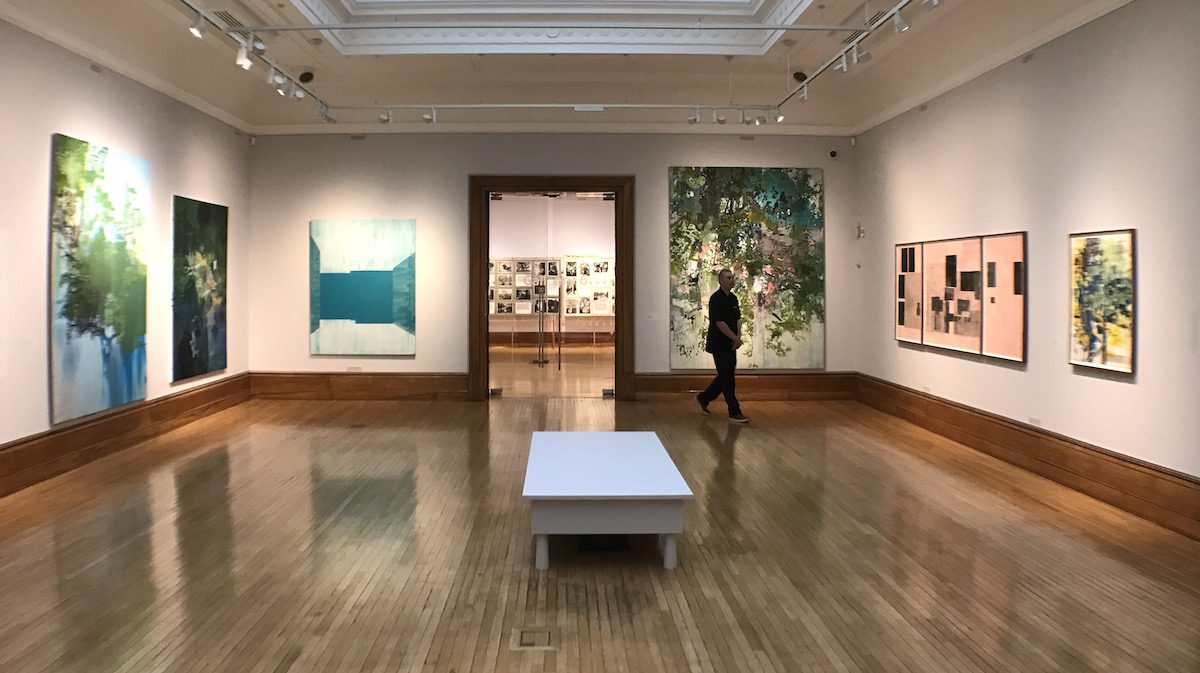 Hurvin Anderson is the only painter. Born in Birmingham in 1965 he studied at Wimbledon College of Art and the Royal College.  His dextrous, vibrant paintings are concerned with a sense of place. A place that is often discovered during the process of painting and the use of reprinted photographs and drawings. There’s an intense struggle between figure and pattern. Layered and complex, the paintings are created by a building up and a paring down to create subtle palimpsests that imply the passing of time and the recovery of memories. Melding images of boys picking mangoes in Montego Bay, Jamaica with a recollection from his Birmingham childhood of his brother going off and scrumping for apples, he creates intense images that are at once both familiar yet slightly uncanny, lyrical yet harsh. Often using a classical grid to map out the space within a painting he plays, in his Barber Shop series, with the appearance and absence of the figure. The empty chairs in Flat Top, 2008 are observed by the portraits of Malcom X, Martin Luther King and Mandela from the confines of his nearby painting Is it Ok to be Black? 2016. There’s real painterly sensibility to Anderson’s work. His stunning gardens and landscapes Greensleeves and Ascension, both painted this year, have an evocative prelapsarian feel. I hope he wins.

Words: Sue Hubbard is a freelance art critic, award-winning poet and novelist. Her new novel, Rainsongs, is due from Duckworth in January 2018.