HM Revenue and Customs (HMRC) have arrested three people on suspicion of attempting to defraud it of £1.4m. The authorities said it was the first UK law enforcement to seize an NFT.

NFTs are assets in the digital world that can be bought and sold but have no tangible form of their own. Digital tokens first appeared in 2014 and are certificates of ownership for virtual or physical assets. NFTs have a unique digital signature, so they can be bought and sold using traditional currency or cryptocurrency, such as Bitcoin. NFTs have been promoted as the digital answer to collectables; however, sceptics fear they are a pyramid scheme.

The BBC stated, “HMRC said the suspects in its fraud case were alleged to have used “sophisticated methods” to try to hide their identities including false and stolen identities, false addresses, pre-paid unregistered mobile phones, Virtual Private Networks (VPNs), false invoices and pretending to engage in legitimate business activities.”

Works of art such as paintings may be valuable because they are unique, however digital files are open to duplication. NFT artwork can be “tokenised” to create a digital certificate of ownership that can be bought and sold on the blockchain. The tokens can represent a range of products like art, music and historic documents.

Meanwhile, in another case, collectors of NFTs bought from the online project, Art Wars founded by artist/curator Ben Moore, have spoken out after their NFTs were declared without value. The NFTs have been dropped by the leading trading website Open Sea after it became clear that the artist’s had never granted permission or given rights to US-based developers, DeFi Network who issued the digital images of high-profile artists like Jake & Dinos Chapman, Anish Kapoor and Damien Hirst. What a mess! 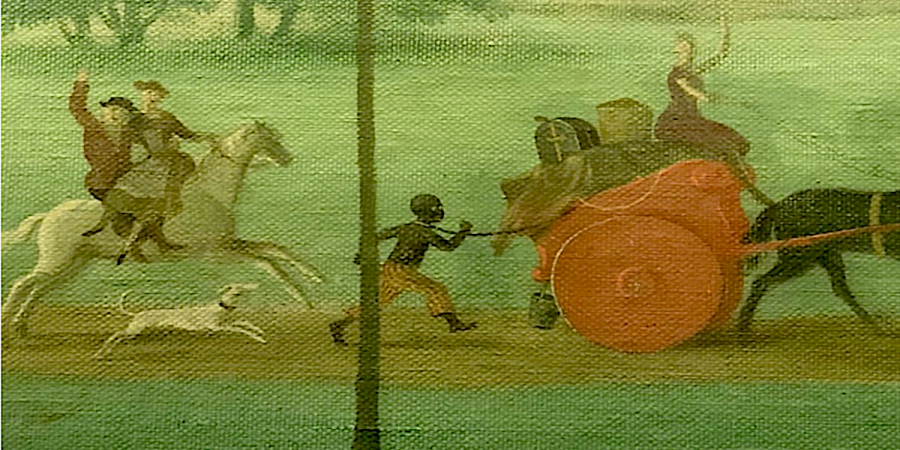 Tate has made a decision on the future of its Rex Whistler mural, now deemed to be racist. The mural painted in 1927 titled “The Expedition in Pursuit of Rare Meats, was painted when the artist was just 21. It continued to be the backdrop of Tate Britain’s exclusive restaurant until it was challenged after the space was renovated in 2017. The mural includes imagery of a black child in a neck shackle running along with a white man on horseback as well as stereotypical depictions of Chinese men and women.

A contemporary artist will now be invited to create a new site-specific installation in the room, which will then be open to visitors as a display space. This new work will be exhibited alongside dialogue with the mural, reframing how the area is experienced. It will also be joined by a unique display of interpretative material, which will critically engage with the mural’s history and content, including dated imagery which is unacceptable in modern times. In addition, it will explore the artist’s life and career, responses to the work overtime, and connections to broader historical contexts.

This approach was developed through a series of discussions held in 2021, which invited voices from outside Tate to explore possible options, including artists, art historians, cultural advisors, civic representatives and young creative practitioners. The discussions, co-chaired by Alex Farquharson, Director of Tate Britain, built on many previous conversations and incorporated direct feedback from visitors and colleagues. The insights and ideas from this process were developed into the recommendations approved by Tate’s Board of Trustees this month.

The offensive nature of the mural’s imagery has been discussed over many years and was previously addressed in interpretation text at the entrance to the room.

In 2020, Tate’s Directors and Trustees agreed that the room should no longer be used as a restaurant and that a new, bolder approach was needed. Tate is responsible for the mural as a work of art, so the new system is required to create an appropriate and inclusive context for it to be viewed and allow this context to evolve as needed.

The room containing the mural will open to the public next winter, and further details about the artist to be commissioned will be announced in due course.

Alex Farquharson, Director of Tate Britain and a co-chair of Rex Whistler mural discussions: “The Rex Whistler mural presents a unique challenge. It has remained static on the walls of a restaurant for almost a century while the museum around it has constantly shifted. Tate Britain is now a place of everchanging displays and commissions, where the past and present are juxtaposed and where art is open to all. The mural is part of our institutional and cultural history, and we must take responsibility for it. Still, this new approach will also enable us to reflect the values and commitments we hold today and to bring new voices and ideas to the fore.”

Amia Srinivasan, Chichele Professor of Social and Political Theory at All Souls College, University of Oxford, and a co-chair of Rex Whistler mural discussions: “Conversations about the mural were open, rigorous, and filled with good-natured but deep disagreement: Would keeping the mural open to the public accentuate its power? Would shut it off risk doing the same? Could artists of colour use the space as a creative site of reappropriation? Or would this unfairly burden them with a problem produced by a historically white institution? One of the few points of consensus was that Tate had to take ownership of its history and that whatever decision was made had to be an invitation to a broader conversation, not the end of one.”

The controversial artist Jeff Koons has designed a $360k limited-edition 2023 BMW M850i Gran Coupe. It’s a comic book, Roy Lichtenstein rip off said to take 285 hours per car to complete. BMW will only sell 99 copies of the car worldwide, with the U.S.

The edition of the BMW 8 Series is my dream car! – JK

“I can’t wait to drive it and ride in it, and I hope that people will enjoy the Gran Coupé just as much as I do”, Koons added. Only four cars will be painted each week. The interior is comprised of high-end materials, fine leather and a cupholder lid with an edition badging and the artist’s signature. The seats are made up of red and blue which reflects the colours of superheroes from the comic book universe as well as those of BMW M. The exploding lines of colour are a homage to the artist’s 2010 BMW Art Car, while the  “POP!” and the vapour thrust imagery symbolises the power and speed of  THE 8 X JEFF KOONS. THE car will be on display in Manhattan’s Rockefeller  Plaza before one vehicle, signed by Jeff Koons, will be auctioned off at Christie’s in New York on April 4. All proceeds from the highest bid will go to the International Centre for Missing & Exploited  Children (ICMEC). Jeff Koons has been personally involved with this nonprofit NGO for over two decades.