Man Arrested Over Theft Of Van Gogh and Hals Paintings

The 58-year-old was taken into custody in Baarn in central Holland. He is suspected of stealing works by Vincent van Gogh and Frans Hals from museums in the towns of Laren and Leerdam.The paintings have yet to be recovered. Frans Hals’s Two Laughing Boys with a Mug of Beer is valued at €15m (£13m; $17.5m).

Van Gogh’s painting known as ‘Spring Garden’, or Parsonage Garden at Nuenen in Spring, a loan to the gallery was taken during a break-in at the Singer Museum in Laren, near Baarn, in March last year.

The other painting, an Old Master by Frans Hals painting valued at $17 million, was stolen from the small Hofje van Aerden museum near Utrecht; thieves stole the picture on August 27, 2020, breaking open a back door. The painting has been previously stolen by thieves in 1988 and again in 2011.

The Dutch newspaper Algemeen was told that it was unlikely that the suspect knew the paintings’ location as stolen artwork was often moved around quickly by criminal gangs and traded for shorter prison sentences. 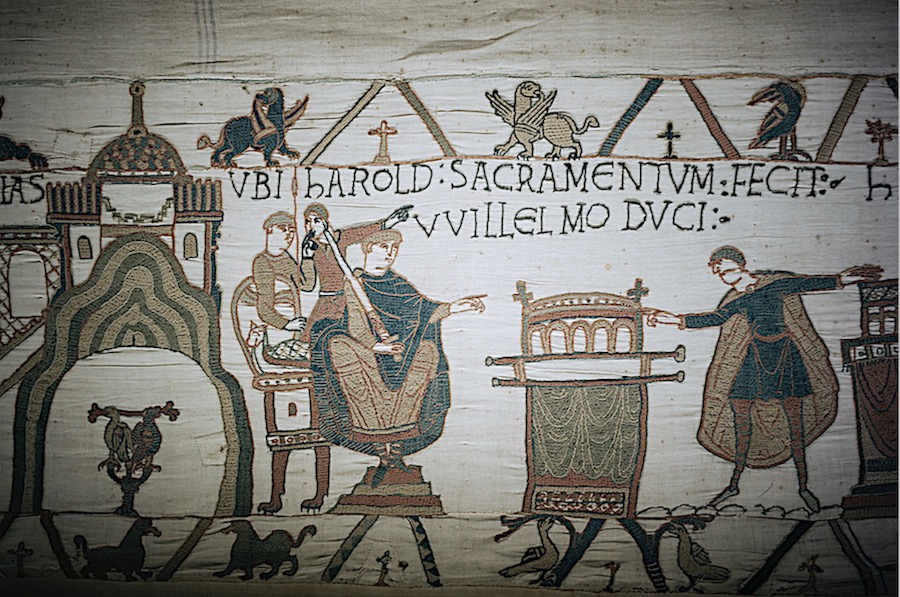 The Bayeux Tapestry, set to go on display at the British Museum, may now not go ahead. The French Government agreed it could leave its shores for the first time in 950 years in 2018. President Emmanuel Macron announced the loan during a visit to the U.K in the same year. He has said the tapestry, which depicts the Norman Conquest of England, would not be transferred before 2021 as it was still undergoing extensive conservation work. The restoration has proven difficult for the delicate needlework.

Created in the 11th Century depicting imagery related to the Norman conquest of England, the tapestry is considered one of the most important relics in the history of art. Condition reports revealed damage to the 230-foot-long textile, with stains and holes among the issues needing attention and repair.

In Normandy, the Bayeux Museum, which houses the tapestry, explained to the Museums Journal that the French Ministry of Culture would fund the restoration. “They stated that it is too early to know anything about the eventual loan, but that the Ministry of Culture is commissioning a study to determine how to remove the artefact from its current position, the conditions in which its restoration can be carried out, and its ideal location,” the report states.

“The Bayeux Tapestry is a world treasure and a symbol of the deep ties between Britain and France.” The tapestry may see the U.K. sometime in the future, the Department for Digital, Culture, Media, and Sport explained.

Christie’s 20th Century Evening Sale in New York will include Pablo Picasso’s Femme assise près d’une fenêtre (Marie-Thérèse)1932 carrying an estimate of $55 million. One of the series of portraits that Picasso painted of his golden-haired muse during this landmark year, this monumental work is among the most stately and impressive depictions of Marie-Thérèse artist painted.

Vanessa Fusco, Co-Head of the 20th Century Evening Sale, remarked: “From the defining series that introduced Marie-Thérèse to the public eye, Femme assise près d’une fenêtre (Marie-Thérèse) was painted during a seminal year in which Picasso crafted a new pictorial language to depict his muse and lover. This striking, monumental portrait was last seen publicly in the superb exhibition devoted to the artist’s “year of wonders,” Picasso 1932, at the Musée Picasso, Paris and Tate Modern, London in 2017-2018. As one of the most ground-breaking and influential artists of the 20th Century, it is only fitting that this exceptional painting will lead the inaugural newly formatted 20th Century Art Evening Sale at Christie’s.”

Painted in Boisgeloup on 30 October 1932, Femme assise près d’une fenêtre (Marie-Thérèse) crowns this great series of 1932 masterpieces. By this time, Marie-Thérèse had risen to ascendance in every area of her lover’s output. In the present work, she has claimed absolute command, an idolised muse now reigning deity-like over the artist and his creation.

Here, Picasso has presented Marie-Thérèse as a winged goddess, a modern-day Nike, her head lunar, luminous and sculptural as if carved from marble, and yet her body sensuous and soft, orbiting around her fiery red torso. No more the languorously reclining nude lost in a private reverie; in the present portrait, she is clothed, alert and upright, her omniscient gaze demonstrating that she is in complete command of her subjects, the artist, her lover, clearly captive to her thrall.

The year 1932 witnessed the extraordinary outpouring of large-scale, colour-filled, rhapsodic depictions of Marie-Thérèse. Having deified her statuesque forms and classical profile in the great series of plaster busts the year prior, Picasso allowed the influence of his young mistress and the bliss in which he found himself, fill his painting. Pictured both seated and reclining, this series saw Picasso perform artistic alchemy with these two revered motifs. With this great succession of paintings—which includes works such as Le Rêve, Nude, Green Leaves, and Bust, Le Lecture (Musée Picasso, Paris), and Jeune fille devant le miroir (The Museum of Modern Art, New York) —Picasso reached the height of his artistic powers. “There is no doubt,” William Rubin declared, “that 1932 marks the peak of fever-pitch intensity and achievement, a year of rapturous masterpieces that reach a new and unfamiliar summit in both his painting and sculpture.”