Liz Taylor’s Van Gogh Vue de l’asile et de la Chapelle de Saint-Rémy is back on the market again after selling in an auction at Christie’s in February 2012 for £10,121,250.

For decades a centrepiece of Elizabeth Taylor’s collection, this late work from the artist’s time at the asylum of Saint Paul de Mausole — offered in New York on 15 May

The controversial painting carries the burden of being challenged as Nazi Restitution. The verdict was upheld after a federal appeals court dismissed a lawsuit by the relatives of a Jewish woman who said she was forced to sell it before fleeing Nazi Germany in 1939. Margarete Mauthner sued Taylor for the return of “View of the Asylum and Chapel at Saint-Remy.”

The painting was purchased by Taylor’s father in 1963 for £92,000 at Sotheby’s and gifted to the actress. Taylor was the daughter of an art dealer, who championed the work of Augustus John in the U.S. It is valued at up to £30,000,000 and is a museum-worthy example of the troubled artists late period. 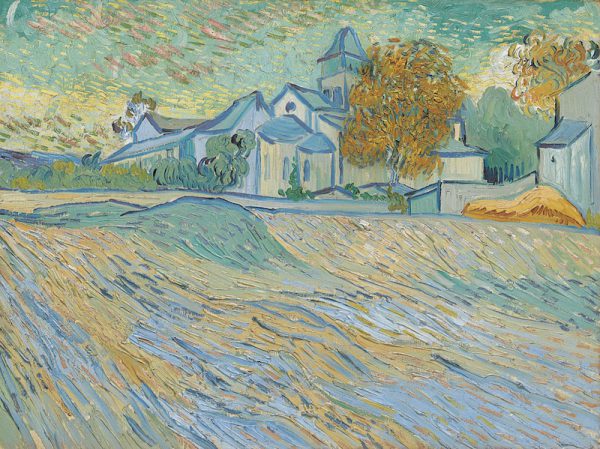 In 2007 Taylor’s lawyers, stated the painting’s provenance was sold through two Jewish art dealers to a Jewish art collector with no evidence of any Nazi coercion or participation in the transactions. “Holocaust art.” That time lapse creates an insurmountable burden for some plaintiffs’ efforts to recover their property: the current possessor’s assertion of a statute-of-limitations defence.

Approximately one month after depicting Laboureur dans un champ, which nearly eclipsed the artist’s record in November, Vincent painted Vue de l’asile et de la Chapelle de Saint-Rémy. Unlike the canvas of the ploughman, which had been rendered indoors and from memory, he painted the chapel en plein air. This luminous painting was included in several of Van Gogh’s most important early exhibitions. These groundbreaking shows, including the 1905 retrospective at the Stedelijk Museum in Amsterdam, were instrumental in the formation of his posthumous reputation. Having seen this painting in the landmark 1905 Van Gogh retrospective at the Stedelijk Museum in Amsterdam, Paul Cassirer, the leading German gallerist of the time, placed it immediately afterwards in his own traveling exhibition, which alerted the German public, art critics, historians, and contemporary painters alike to the achievement of an artist who was rapidly achieving legendary status.

Other highlights of the Christie’s NY sale include Marc Chagall, La Tour Eiffel, 1929. $6-9 million | Fernand Léger, Le grand déjeuner, 1921. $15-25 million New York – On May 15, Christie’s Evening Sale of Impressionist and Modern Art will be underscored by exceptional works by the market’s most sought-after artists. Highlights will include paintings by Vincent Van Gogh, Fernand Léger and Marc Chagall, all of whom experienced breakthrough results in November 2017. Max Carter, Head of Department, Impressionist and Modern Art, Christie’s Americas, remarked: “On the heels of record and near-record results for Léger, Chagall and Van Gogh in November we are thrilled to offer such fine examples by each artist this May. From Le grand déjeuner, among Léger’s most celebrated motifs, to Chagall’s pulsating 1920s La Tour Eiffel, entrusted to Christie’s by the National Gallery of Canada, Ottawa.

Fernand Léger will be represented in part by Le grand déjeuner (estimate: $15-25 million), executed in 1921. Léger painted Le grand déjeuner as he pursued his aim during the early 1920s to radically recast the aesthetic conception of beauty in the art of his time. To this end, he combined elements drawn from classical traditions of the past with the increasingly mechanical realities of contemporary living, to create polished and gleaming visions of the essential forms that comprise the human presence in the modern world. More than ninety years later, in our present digital age, the style he forged then still appears strikingly futuristic. One of his two peaks from this period was Le grand déjeuner, which was the last and largest of three closely related canvases. The artist considered Le grand déjeuner to be one of the finest works of his career; it has indeed become an icon of the 20th century, an emblem of l’esprit nouveau in its own day, and no less definitive in our own. This will be Le grand déjeuner’s first appearance at auction since 1935.

Recent record: Fernand Léger, Contraste de formes, 1913. $70,062,496 | November 2017 Filled with an air of sensual, passionate romance, Marc Chagall’s La Tour Eiffel (estimate: $6-9 million) encapsulates the wonderfully poetic style that emerged in his oeuvre during the 1920s and 1930s. It was during this period that he experienced an unprecedented period of happiness, stability, comfort and professional success amidst the bustle and energy of Paris. Bursting with rich colour and the artist’s unique symbolic vocabulary, this beautifully composed painting includes many of Chagall’s favourite themes, from love and memory to music and fantasy, combining unexpected elements to create an otherworldly effect. La Tour Eiffel, which Christie’s is honoured to handle on behalf of the National Gallery of Canada, Ottawa, to benefit its acquisitions fund, is being offered for its’ first time at auction, following record-breaking results for Chagall in November.

In November 2017, Van Gogh’s Laboureur dans un champ, from the collection of Nancy Lee and Perry R. Bass, realized $81.3 million against its original estimate of $50 million, just shy of the auction record for the artist.

Francis Taylor purchased Vue de l’asile et de la Chapelle de Saint-Rémy  at auction in London on behalf of his daughter Elizabeth, the Hollywood actress whose most famous film — the epic Cleopatra, co-starring Richard Burton — would premier just two months later. The painting remained in the living room of her Bel Air home until her death in 2011.

Christie’s Evening Sale of Impressionist and Modern Art New York Sale is on May 15,